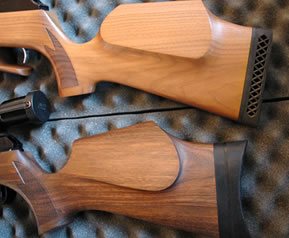 With the level of interest in ‘Buddy Bottle’ style air-rifles still surging ahead, it seemed about time to take two of the most popular examples and see how they shape up alongside each other.

As I’ve often stated, I’ve never quite been gripped by the ‘buddy’ concept, yet many shooters swear by them; and the very fact that nearly all the major manufacturers feel the need to come out with their own take on the theme means that the design warrants respect.

For the uninitiated, the ‘Buddy-Bottle’ system basically involves a detachable, compressed air bottle, which is charged via the usual process – either a dedicated hand pump or a divers’ air-cylinder.

Part of the attraction used to be that a spare bottle could be easily carried along for the trip, and changed over in the field, so to speak. However, with the subtle improvements to the system, shot capacity on the latest models is just awesome, so the need for any back-up air-supply is all but redundant.

Two of the Best

The two rifles on test here are both established in their own right, and have been on the market in some form or another for a good few years now. Both are bolt-action PCPs that follow very similar lines.

First up is the Superten MK3 from BSA – the latest incarnation in the popular series, and armed with a neat 200cc bottle. Pitched against the Beesa is the formidable Rapid 17 MKII from Cambridgeshire based Theoben. With its whopping 400cc bottle in place, you could be forgiven for suggesting that it’s an unfair match; yet for the purposes of this test, I’m not really interested in huge shot counts.

If you really insist, as a technicality, the BSA’s smaller 200cc cylinder produces around 150 shots in .177 calibre from a 232bar fill, against around 300 shots from the Theoben 400cc bottle at 200bar. There! That’s out the way. Let’s hear no more about it! The BSA obviously loses points in this area, yet a 150 shot capacity (230 in .22) is still huge, and that slimline cylinder gives it a definite edge in the visuals department.

Whilst focusing on the visuals, I have to award the Superten maximum points here for style. When BSA first launched this rifle, the stock was rather basic to say the least (I’m being diplomatic). It did the job, but with no finesse.  The superb walnut stock supplied here is fully revised and simply in a different class. A tasty piece of design work indeed.

The pistol-grip is well shaped and includes a palm-swell and generous thumb groove for an ultra comfortable hold. The defined cheek-piece is beautifully curved and proportioned for scope alignment.

Two panels of perfectly executed cut chequering adorn the forend, which tapers to a deliciously subtle schnabel tip. Detail is everywhere with this timber, and someone has clearly banged some heads together at BSA, with outstanding results. The final touch is the inclusion of a Wegu style adjustable butt pad, giving the Superten another point over the Rapid 17, and any prospective owner a genuinely useful feature. My only possible criticism of this stock is the rather crudely applied splash of red (seemingly by a 6 year old with an oversized paintbrush) around the safety catch.

By contrast, the Theoben woodwork, whilst being superbly finished, seems just a little utilitarian. That integral open trigger guard, formed from wood, adds to the ‘functional-not-pretty’ image; yet the same features are all here to extract maximum accuracy from the action. Again, the high comb of the cheek-piece puts the shooters eye in perfect alignment; and bearing in mind the high sight line on this rifle - created by the deep stock and the raised breech block – it needs to.

Theoben opt for laser-cut chequering on their rifles, yet the finish is excellent, giving the slightly thinner pistol grip a classy look. A similar thumb shelf is included, yet the fore-end is bereft of chequering, and as such looks a little plain. The depth of the fore-end has the advantage of providing support for a competitive target stance when taking standing shots.

That larger 400cc bottle, however, does mean that your more likely to end up gripping cold metal at the fore-end rather than walnut, with the Theoben conceding around 3 inches of wood in this area compared to the BSA, in order to accommodate the air supply.

Both these rifles come fitted with large silencers at the muzzle, and are both fairly effective at taming the muzzle crack. Theoben’s ‘Vortex’ tipped variation just edges this one, although the greater action noise from the BSA renders the test less than scientific.

The actions on these guns are nearly identical in operation, with the shot cycle as follows: the bolt handle sits in a square ‘c’ shaped slot, and is basically pulled up, back and down into a rear holding slot. At this point a magazine can be pushed into place. The bolt is then lifted up, pushed forwards and down - which cycles the mag, seats a pellet into the barrel, and locks the bolt.

With practice, the system is simplicity itself, but on test, not without its pitfalls. Firstly, regarding the Superten, I found the bolt action just a little sticky, occasionally requiring the bolt to be pulled back that bit harder in order to cock the action. The BSA magazine itself is wonderfully robust, including a metal casing. Loading the un-sprung magazine just requires a pellet to be dropped in each aperture as the centre wheel is revolved – it couldn’t be simpler!

The Theoben magazine, by comparison, seems unnecessarily fragile and awkward to set-up. After each pellet is loaded into its chamber, the magazine is turned against spring pressure which is then held by a ratchet pawl. This exposes the next empty chamber, ready for the next pellet to be loaded. Once in place however, the Theoben action feels that bit more precise and refined.

At this price level, you really have a right to expect quality, sophisticated trigger units, and this is the case with both these rifles. The BSA incorporates a semi-match unit, with no fewer than 10 different adjustments, according to BSA. Personally speaking, I like a trigger as light as possible, and being ultra critical, just found the first stage to be a touch heavy. Blade rotation, position and pull weights are all included, and I know it’s built up a reputation in the field, so my obsessive ‘precision target shooting’ demands can probably be overlooked.

The Rapid now comes fitted with Theoben’s MK4 trigger, and this is quite simply a top class unit. It’s taken Theoben a while, but they now have a genuinely competitive unit here, with ultra sensitivity and refinement – well done chaps!

The finish to the metalwork on both guns is good, but the Theoben just pips the BSA here, as the breech-block on the Superten (certainly on the test rifle) seemed rather dull.

Both these rifles come fitted with a regulator; the BSA’s courtesy of a John Bowkett design, so consistency is kept within acceptable levels.

Over the chronograph, I tested variation over the first 50 shots. Apparently, Theoben set-up their guns with Barracuda Match pellets so, using these, I returned a variation of 17fps, and energy of just under 11ft/lbs. The BSA was fed a diet of the ever popular JSB, and managed a spread of 25fps - giving around 11.7ft/lbs.

By now, I was itching to see just what these guns were capable of in the accuracy stakes. Initially, whilst setting up the scopes, I printed 5 shot groups at 20yds – 3/16 inch from the Rapid, and amazingly, slightly smaller from the Superten. At 35yds though, that joyous trigger on the Theoben redressed the balance, but only by a whisker! A 3/8 inch group compared to ½ inch.

In the aim, both rifles are finely balanced, with a nice amount of bias towards the front – preferable for standing shots.

Two points of interest remain however. If weight is an issue, then try before you by. The BSA tips the scales almost a pound heavier than its rival, coming in at 8.2lbs. Weight can mean stability, yet, as always, it largely comes down to personal taste. The other point concerns those factory fitted scope mounts on the Theoben. Nicely made as they are, they bolt into set positions and therefore slightly limit positioning of a scope; just a factor to bear in mind.

With genuine pros and cons on both sides, the final selection comes down to the individual.

What we have here are two of the best examples of this type of rifle. The BSA already has an ‘Airgun of the year’ award under it’s belt, and Theoben – the original makers of magazine fed, buddy bottle PCPs - are beginning to show some real refinement; so undoubtedly, either gun represents a sound investment for hunting or HFT.