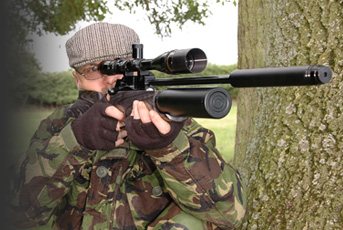 OK; the term ‘buddy bottle’ is a little twee and rather irritating, but there’s no doubting the sheer popularity of this style of rifle. It was Theoben themselves that introduced the original Rapid 7 to an unsuspecting public, some twenty years ago, and like it or not, the model has gone on to become the backbone of the company’s sales in one guise or another.

I say ‘like it or not’, since the very format on which the Rapid is based, seems to polarize the shooting fraternity. I for one remember viewing the original Rapid with disdain, as it was hawked around various shows to gauge reaction, (despite it possessing ground breaking features for the time) - and it comes down to the basic layout.

With a conventionally designed rifle, the forend of the stock (i.e. the part gripped by the leading hand) is formed by the flowing extension of the woodwork. On many bottle-fed rifles, the ‘buddy’ bottle IS the forend, with the requirement to grip cold steel being less than comfortable in the field.

Each to his own, as they say; and a ready market has arisen that simply loves this style of rifle, for the very unconventional approach that had me wincing all those years ago. With the very latest incarnation on test here, I have to confess to being genuinely swayed from my prejudiced opinion.

Of course we’re talking different leagues here, and the Theoben Rapid MKII Deluxe - my test rifle this month - frankly bears little of the utilitarian nature of the original model, introduced all those years ago.  In fact the workmanlike simplicity has been replaced by an unashamed air of class, and it’s all the better for it in my book.

Luxurious Laminate (that’s plywood to you!)

Those notable features create a unique profile for this ‘Deluxe’ variant, with none more striking than the flashy, but supremely practical laminate woodwork.

It’s this that obviously catches the eye first, and very nicely finished it is too. Walnut is all very well, and there’s no greater fan of beautiful graining than my good self; yet the technical benefits of laminate as a medium, should not be underestimated. The bonding of many thin layers of wood to form a whole block, creates the strongest form of wood - and the most stable. With immunity granted from extreme temperature change, it really is no surprise that top class match rifles (both air and live) often come fitted with laminate stocks as standard.

A gun of the class of this Rapid, not to mention the asking price, clearly warrants technical advantage where possible, so adopting laminate represents a logical move.

With it’s thick matt varnish finish, the stock fitted here comes ready weather sealed, and really does feel luxurious to the touch. The configuration is pretty damn good too, with the essential raised cheek-piece resulting in perfect head alignment when using a scope. A near 90degree target grip is set off with exquisitely accurate laser-cut chequering, whilst a generous scalloped thumb shelf promotes trigger control.

An integral trigger guard formed as a wrap-around feature, doubles as a deep support for standing shots, whilst the subtle extension of the forend, enveloping the first third of the on-board buddy bottle, goes some way to nullifying my gripes on the grip issue.

A Great Action and Finish Too

Action wise, Theoben are unsurpassed in the finish they achieve, and the traditional chemical blueing applied to the barrel and breech block, is just mouth-watering, being both deep and lustrous. No one quite does ‘chunky and robust’ like these Cambridgeshire upstarts either, and that signature breech block is clearly built to last.

This new Deluxe model sees the use of the company’s new ‘tear drop’ steel bolt handle, and it really is an improvement on the simple ball design that it hopefully replaces. The solid tapered bolt feels totally comfortable in operation, as it slickly goes about its business, but full marks have to be awarded for aesthetics alone.

Theoben now use industry standard Lothar Walthar barrels - in this case 16 inches worth. Sitting pretty at the muzzle is one of the latest ‘Long Series’ silencers, which not only incorporates the Vortex style cap, but comes crammed full of muzzle crack absorbing features. Manufactured entirely in-house, the silencer incorporates dedicated baffles that reflect backwards and diffuse the excess air, before the pellet passes through an additional air stripper. No hair curlers hidden inside this one!

As Darren from Theoben explained, the long series silencer was originally developed to tame the crack from some of the company’s FAC level products, and has been found to perform extremely well with phenomenal power levels passing through the unit. At 12ft/lbs, I can certainly vouch for its effectiveness, having shot the Deluxe Rapid alongside club members using HW100’s fitted with Weihrauch’s top class, own label silencer. The Rapid compared favourably, to such an extent that the aforementioned HW100 owners club were suitably impressed. A muted output just adds to the overall package, and this rifle’s undeniable enjoyment factor. You may just get a second shot at the bunnies too!

A Lot of Bottle…

Further advances come thick and fast with this rifle, including a brand new valve arrangement that now means removing the 400cc buddy bottle is simplicity itself. Formerly, rifles of this type would require a particularly irritating routine, whereby the bottle would have to be unscrewed a quarter turn, then the gun would be dry fired until all the air inside the link was expended. Theoben have now blown such nonsense out of the water, and the Deluxe leads the way. Just gently unscrew the bottle… and that’s it!  Simple. Well done chaps.

Once disconnected from the action, the bottle is screwed directly into the valve on a divers cylinder, and charged to 232bar. Shot count is phenomenal, with this test .22 model providing well over 400 shots, and the .177 version good for 250-300. In practise, most shooters would probably top up pressure levels after one or two sessions, so the figures, as always, are largely academic, whilst admittedly reassuring.

Fitting a scope to this Rapid may require a little more thought than expected, and herein lies my only gripe. Theoben don’t machine dovetails onto the block, opting to supply and fix split ring mounts in place - bolted into their own set location point on the receiver. All very well, and the engineering quality of the set-up is beyond question, but the configuration does slightly limit flexibility as to final scope positioning.

OK; I had no trouble with the set up in testing, yet I know from experience that changing to different scopes further down the line, with varying eye-relief, may just highlight this aspect. Why Theoben don’t just machine conventional dovetails, and let the customer source their own mounts, I really can’t fathom, but there you are.

And so to the twelve shot .22 magazine. With the bolt of the Rapid pulled back and down into its recess, the mag can be pulled from the left side of the action. Then with ‘clear side’ facing, wind the magazine lid anti-clockwise against spring pressure, until it reaches a stop and the first chamber is revealed. Drop a pellet in head first and gently turn the lid back to the next chamber, making sure the first pellet doesn’t fall through. Now simply fill each chamber in turn, and push the mag home into the action.

Sounds complicated? Well it is slightly more fiddly than some other designs on the market, but in use I was mightily impressed.

On the range, this .22 Rapid delivers 12 shots in no time at all, so a back-up shot in the field is but a flick of the bolt away. Over an extended chrono session and several accuracy tests, the bolt and magazine cycled faultlessly- that is to say without a single lock up or stickiness in operation. Quite an achievement for this type of rifle, and the sheer slickness of operation has to be felt to be appreciated.

With Theoben’s much vaunted MK4 trigger unit in place, this Deluxe Rapid really does start to stack up as quite a rifle. The near match unit can be adjusted to give crisp, light release, if desired, and if I’m impressed (as something of a trigger freak), believe me it’s good!

At 30yds, groups of around 0.3inches, using Air Arms Diablo were effortless, whilst at 45yds, a little over half inch was all the proof I needed that this Rapid delivers.

Power output is regulated with Theoben’s own design regulator, a feature born out by the chronograph session. A monotonous task is the old chrono check, and since I’ve seen first hand the capabilities of this system, shot counts are largely, as previously stated, academic. With many modern air rifles generating huge shot counts these days, the consistency over the early stages is far more important.

I monitored 200 shots, and with a total spread of just 20fps, and an average energy output of 11.7ft/lbs, it’s clear that this Rapid has got what it takes.

Brand loyalty is quite prevalent among airgun shooters, but none more so, it seems, than among the Theoben faithful. Not many other rifles can boast their own supporters club. Check out www.rapid7ownersclub.com/  ( I kid you not), which clearly demonstrates the passion this marque engenders.

To say I was impressed with this beautifully made Rapid MkII Deluxe is an understatement. In fact I’m reassessing my gun cabinet as we speak!!