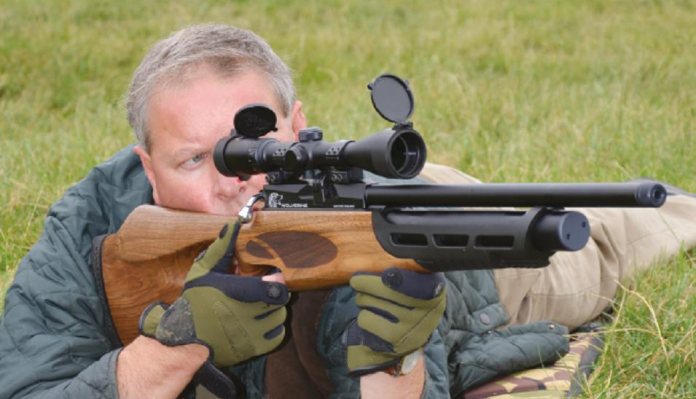 The modern pre-charged pneumatic (PCP) air rifle comes in many guises, and with a host of manufacturers setting their best designers to the task, the end result is a plethora of models, offering a different take on a theme. Each with their own character and features. I have assembled a selection of some of the more prominent models of late, and they serve to illustrate the wonderful variety on offer in today’s market.

BSA’s flagship Goldstar SE has been a success from the off, with several tournament wins on the HFT circuit. A fully adjustable stock, (available in walnut, black pepper laminate, or red white blue laminate) including a front stock raiser plate, cheek piece and butt pad assembly, means the serious competitor can set it up to their individual and exact requirements; and it’s well worth taking the time to do this.
These rifles are fitted with BSA’s own, cold, hammer-forged barrels, (fully floating incidentally) but add in a match-style trigger, regulated action and adjustable factory fitted air-stripper, and it’s little wonder that this model has proved it has what it takes, in a well thought out, fairly compact format. Single or multi-shot- the choice is yours.

Daystate are well known for their electronically-powered range of rifles, yet the Wolverine is a purely mechanical design, with high-end build quality, and a standard of finish to satisfy the enthusiast. A full length barrel shroud is fitted, which is treated to a rust free coating, and threaded at the muzzle to receive an add-on silencer. The last few inches are a void with baffles to absorb some muzzle blast.

When Daystate introduced their 100ft/lbs .303 calibre original Wolverine, it was a major achievement, not just in terms of the awesome power output, but the sheer beauty of the stylish woodwork. Sadly, the 12 ft/lbs version doesn’t quite replicate that profile, but the Wolverine ‘C’ seen here, is a tasty rifle nonetheless. ‘C’ denotes cylinder, and the design includes a ballistic polyester front section of stock, which, whilst a little unorthodox, is very well executed. The original idea was for this to be removable, and a buddy bottle fitted later down the line if required. As it stands, it all works rather well, and takes the brand forward. The shooter has the usual choice of single shot tray, or the magazine, with either option just snapping into the breach, and with all the standard Daystate features on-board, the Wolverine ‘C’ is a class act, just bursting with character.

When top British brand, Air Arms, launched their flagship- the FTP900, it was an instant hit. However, it soon became clear that there was demand for an additional lighter competition rifle dedicated to HFT. The HFT500 was born, and it has already proved a big success for this most dynamic brand. The action is technically un-regulated, but expect a large shot count regardless; courtesy of that extra long cylinder. A laminate sporter stock with an adjustable cheek piece and butt section, semi-match trigger, fully floating Walther barrel, and a super slick, side-lever action, is a fantastic start. Add in a factory-fitted air-stripper at the muzzle, and it’s not difficult to see why this competition special has taken such a hold. The forend raiser plate (hamster) however, is an optional extra.

Ironically, the FTP900 (often heavily customized) continues to prove popular in HFT, but the HFT500 has already chalked up a series of wins at the highest level. A streamlined, compact rifle, with devastating down-range performance. Need we say more?

Aeron are a manufacturer based in the Czech republic and are relatively new to the UK market. The Black Mamba is a targetstyle pneumatic design, including 2-stage match-style trigger, fully floating barrel, pressure manometer, side-lever action, wood/ aluminium chassis, quick-fill design, and power adjuster.

Similar in profile to Steyr, the Aeron features a modular stock chassis design and the aluminium central assembly looks and feels well engineered. The stock has three wooden sections- the cheek piece, front stock raiser, and pistol grip, and all three are adjustable in some way. Wood can be specified in black, beech, red, or laminate and the grip can be ordered left or right handed too, so there’re plenty of options.

The HFT model shown here, comes with a wooden front forend raiser block, which can be moved along its axis on the accessory rail. The Ultimate FT option differs in that it comes with a raiser/rest that is fully adjustable for angle too. The trigger is adjustable for reach, length, angle and pull weight. It lacks the subtlety of some match units, but good nonetheless. With all these features, in an exciting package, the Black Mamba clearly has much to offer for the serious competition shooter.

The all new Compatto from Brocock could prove something of a landmark product for the brand, if initial reactions are any indication. Now part of the Dianna group that also owns Daystate, Brocock really seem to have moved up a gear, and the Compatto up close, impresses from the off.

Unlike a true Bullpups, the trigger unit on the Compatto has been cleverly designed to sit much further forward than usual, avoiding the use of remote linkages synonymous with the Bullpup blueprint. That means trigger feel isn’t compromised; and with up-market build quality, a decent barrel, and fine handling, this unusual model is a sound investment for fans of this style of gun.

Turkish manufacturer Kral is best known for its striking range of traditional, budget, spring-powered airguns, but the launch of their first PCP in the shape of the Puncher, has caused quite a stir. OK, the format is conventional, with the familiar barrel over cylinder layout hardly breaking new ground; but closer inspection reveals a very capable rifle. Get past those soft, curvaceous aesthetically pleasing lines, helped in no small part by the attractive Turkish Walnut stock and it’s the spec list that really stands out. A multi-shot action (12 in .22, and 14 in .177), side-lever cocking, 2-stage trigger, pre-threaded muzzle, probe charging, integral pressure gauge, manual safety catch, dual scope rails, fibre optic open sights as standard, and power adjuster, means the Puncher comes very well appointed. In use, the magazine system adopted is a little fiddly when compared to some, but all works fine once familiarization has taken place. Overall, an easily adjustable trigger, complete with a well shaped blade, and a good level of performance, all in a really nice handling package, makes for an enjoyable general purpose rifle, at a very competitive price.

Evanix are made in Korea, and with strong, overtly militaristic designs, their products invariably divide opinion. Pick up this Sniper-K, and it hits you just how rugged and robust is the overall design. Chunky, over-sized, over engineered parts set the tone, and the overall impression is of a near bomb-proof construction, and a product built to take some serious use. It also feels heavier than you might expect, since that skeleton stock deceives the eye; yet at 7.6lbs without a scope, it’s still only in the medium weight bracket. Specification-wise, the Sniper-K is a multi-shot PCP, with a 10-shot rotary magazine cassette, and an adjustable, 3-part tactical stock. Side-lever cocking, a shrouded barrel, and two-stage trigger also feature.

All the stock elements are fully adjustable, so fit can be tailored to the individual. Work the super smooth side-lever to index the next shot, and it soon becomes obvious that these rifles are finely engineered, and built to last. Indeed; having tested this model exhaustively, I was left to conclude that this Evanix design is up there with the most reliable magazine systems on the market, so if this style of gun appeals, the Evanix takes some beating.

Impact Airguns operate from the old Theoben factory, and the chunky, boldly engineered components are instantly recognisable in their line-up. The Revolution GSX600 is the flagship model in the range, and is aimed specifically at the competition shooter. Again, a regulated action aids consistency, whilst a superbly configured, adjustable walnut stock from Custom Stock, allows the shooter to set both cheek piece and butt pad to their liking.

A chunky bolt cycles the action, and whilst it comes as a multi-shot, with the scalloped breech block, it is possible to use it as a single shot. A sizeable silencer comes as standard, which makes this model super quiet, and a satisfyingly light and sensitive trigger encourages a relaxed shot release. These rifles have already tasted success on the HFT circuit, and are equally at home in a hunting scenario. Not cheap, but certainly high grade.

Weihrauch, caused quite a stir when they launched their best selling HW100 series a good few years back, and there’s no doubting this model’s wide appeal. That said, much excitement has been generated with the arrival of an all new PCP from this top German brand, in the shape of the HW110, and it really is a different animal. Top features such as two-stage trigger, quality barrel, and a super quiet action are a given, but there’s much more.

Weihrauch employ cutting edge technologies here, and along with the new 10-shot magazine, the HW110 sees a radical departure in the way it’s manufactured; with much of the receiver assembly actually formed from polymer/ synthetics. Looks may not be to everyone’s taste then, but with the fully ambidextrous stock, a highly tactile ‘soft touch’ beech, (effectively wood, coated with a thin layer of rubber type compound) the feel and handling are fairly unique.

Velocity is effectively regulated , so consistency is impressive too, but loading the magazine is a slightly fiddly process. Use of polymer helps keep the weight down as well as reduce production costs, so it’s no surprise that this model comes in significantly cheaper than its stable mates. All in all then, it looks like the HW110 is clearly set to make an impression.

FX produce several Bullpup models, where the action is set right at the back of the stock but the Wildcat is arguably, one of their best with it’s mid-positioned, sidemounted cocking handle. The new design features a high grade aluminium cylinder, with a new tactical finish, specially formulated to be resistant to finger prints; a form of matt anodizing and it feels reassuringly durable. A small section of barrel is visible, and this is conventionally blued. The rest sits in a fixed, full length shroud, so don’t try to screw it off!

The trigger uses a remote linkage, which does make the take up a bit long and soft, though the break is good. Most pleasing is the mid-positioned cocking handle that makes operation very natural; however, the safety is positioned at the rear, which is not so practical. The end result is a fast handling gun, courtesy of that ultra smooth side-lever, with weight distribution naturally more central or towards the rear. A regulated action, fully shrouded barrel, thumb-hole composite sporter stock, 8-shot magazine system, and a semi match, 2-stage trigger, all add up very nicely. Having the action right next to the face is a perceived drawback of any Bullpup, but in the case of the Wildcat, two sections of aluminium form a full length cheek piece- subtly shaped, and perfectly comfortable. In short, the Wildcat has a great feel to it, and has to be one of the best Bullpup designs currently available.