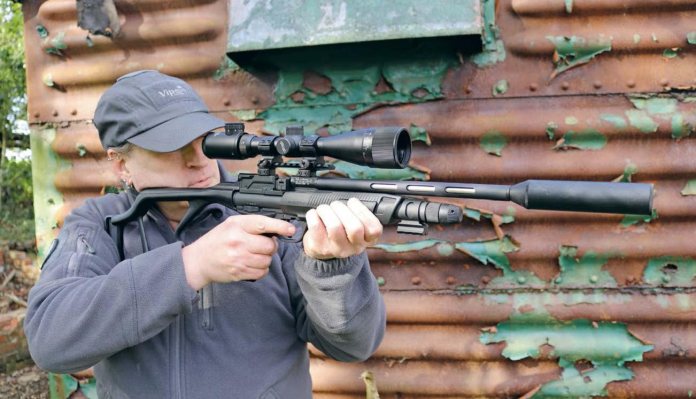 CO2 powered airguns have always been popular and due to recent world events, they seem to be enjoying quite a revival as people use their leisure time to indulge in hobbies that can be practised at home. In relation to the shooting of airguns, obviously, I refer to plinking, which is the most basic form of airgun use and a way to while away time in what can become a most absorbing and pleasurable pastime.

Now, pump-action airguns have been around for aeons, more often though, the pumping action is used to push enough air into a cylinder to power a pellet from the barrel. The RP5 is unique in that the pumping motion actually cocks the action, allows a measured amount of CO2 to be taken from the cylinder and also allows the magazine to station a pellet in line with the barrel. The forward motion of the pump-action is the manual movement that probes a pellet directly into the smoothbore, choked, steel barrel.

The Umarex RP5 carbine is based on its pistol namesake, which already has an army of admirers. So in that respect, to turn the pistol into a mini carbine is just a simple task of adding a butt section, which is exactly what Umarex has done.

The black, polymer, ambidextrous stock is a very basic yet practical design and one that manages to fulfil the criteria for hold, balance and comfort. The butt section is best described as having a contoured, yet skeleton design ‘framework’ that incorporates a medium height cheek rest with a curved shoulder section.

The slab-sided pistol grip is obviously the same as the RP5 pistol and it’s from here the carbine shows all the features of the pistol it’s based on.

It’s at the forend/ mainframe where all the major moving units are found that make the RP5 so much fun to shoot. The fore section not only houses the two 12-gram CO2 capsules that power the gun but also the mainframe’s polymer outer casing is the pump-action mechanism that cocks and direct loads the pellets. Incidentally, there’s also a short run of Picatinny rail attached to the front cylinder, a useful addition for the fitting of a bipod, torch or laser.

To help the rifle feel more secure in the hold, oblong shape indents have been integrated into the stock moulding at the pistol grip and along both sides of the forend.

To install the CO2 capsules, simply unscrew the end of the cylinder and insert the capsules into the hollow, tubular gas reservoir. The first enters nose first and the other is installed with the neck facing forwards, away from the other, so back-to-back so to speak. Then, when the ridged cap is screwed back on it pierces the cartridges ready for use.

Interestingly, the RP5 can even work off only one CO2 bulb. In this manner, one of the two bulbs placed in the housing can be an empty one but the other needs to be full. You’ll obviously get fewer shots, but useful for the times you’re keen to carry on shooting and unfortunately only have one capsule left to use.

Once scoped up and powered up, it’s time to fill the magazine. The RP5 comes supplied with two ‘stick’ magazines, which at first look a tad unusual but show quite a nifty design.

The 5-shot removable magazine is a quite simple but highly effective unit. It operates very much like a stick magazine that can be found housed in some CO2 powered pistol grips, but rather than being in a stack format, this is linear. The tray that holds the ammo is held within the oblong shape polymer body and it’s held against an internal spring. In the empty position, the pellet carrier is clearly seen protruding out from the right-hand side of the magazine body.

To load, you gently press in the carrier until a chamber is lined up with the loading aperture in the body casing of the magazine. Each time a pellet is loaded it holds the pellet carrier in this position. When this procedure is repeated for all 5-pellets, the carrier will now be fully depressed into the body of the unit and will be sitting flush with the right-hand side of the magazine itself.

To load a magazine into the RP5, you first depress the large, elongated slide release catch set into the righthand side of the forend/ mainframe. This releases the outer polymer casing (slide) and allows it to be pulled back. The rearward slide operation needs to be done with a strong movement, so the rifle fully cocks and locks in the rearward position.

Rather than being slid into position, the magazine needs to be held above the open housing and then placed down onto a locator pin, which goes into a hole in the underside of the magazine. Once in situ, you need to depress the slide release catch and push the slide forward. This will then take the first pellet from the magazine and the gun is ready to fire.

Every time the slide is fully operated in the back-and-forth cycle, it cocks the rifle and takes a pellet from the loader, which can be seen to begin to progressively protrude from the right-hand side of the carrier as the internal spring moves it across. This will ultimately show fully extended to the right once all 5-pellets are fired.

The RP5 in pistol format comes with open sights but this isn’t the case here, so a sighting system of some type is needed, preferably a red dot or sensibly sized scope. This can be fitted to the dovetails or by using the reach forward, raised Picatinny rail mount that comes supplied. I fitted the rail and first tested the rifle with a little red dot sight, which proved a lot of fun at close range.

I later removed the red dot and fitted a Walther ZF 3-9 x 40 AO IR scope, which allowed for a comfortable head position, however, using the raised rail will largely depend on personal preference.

The 2-stage trigger has a nicely curved blade and there’s an ambidextrous, manual slide safety catch positioned at the top of the pistol grip. When slid to the safe position, the safety blocks the slide mechanism, so the safety needs to be in the off position for you to operate the slide mech. Remember this trait and it works a treat, plus helps install safe shooting practices.

As for the trigger itself, it lets off shots cleanly. It’s a predictable unit that showed itself to be far better than expected, especially later in the test when taking more studied, longer-range shots.

No need to annoy

A huge bonus of the RP5 is that the muzzle is screwcut to accept a standard ½” UNF, female threaded silencer. As plinkers will know, this is good news for the neighbours. CO2 guns are loud on discharge, so to be able to quieten the report will help endear this little carbine to those who like pro-longed, informal target shooting sessions. However, this is a gun that you can push the envelope with as it’s no ultra-lowpower jobbie (approx. 3.8 ft/ lbs), so you can test your accuracy against spinner targets and if you want to go old school - tumbling tinnies or spinner targets.

The carbine is surprisingly accurate and I was able to produce ½” groups in the .177 test rifle at 12 yards. Reaching out to 18 yards, I managed to make sub 1 ½” groups. However, this is a non-recoiling airgun, so coupled with the aid of the stock and good quality trigger, you also have these factors on your side for more precise shot placements.

As for shot count, I’d judge you’re able to get around 25-30 usable shots from two full 12-gram bulbs, but do take into consideration that temperature fluctuation affects any CO2 powered airgun.

The Umarex RP5 Carbine is ultra-light, very easy to handle, surprisingly accurate and a highly enjoyable CO2 powered back garden fun gun. Couple all this with the unique action and the capability to mount suitable accessories makes it quite a charmer.