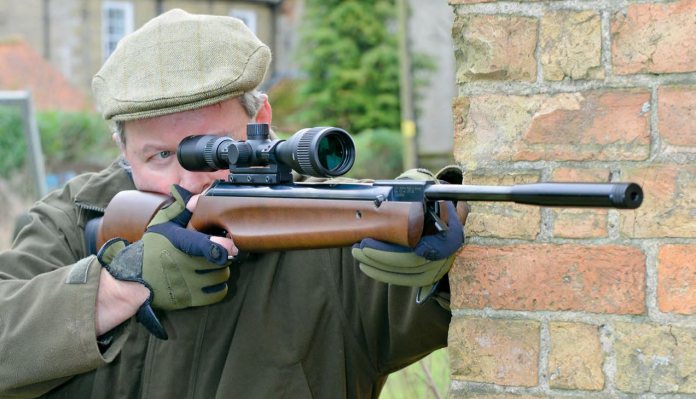 Walther’s LGV project excited me from the start, and it’s not difficult to see why. The original design brief was to attempt to produce the best spring powered airgun possible, utilising all the tuning techniques and modifications known at the time. Custom tuning houses such as Venom Arms (now V-Mach) and Airmasters, were pushing spring piston models to the limit for years, but when Walther came up with the idea a few years back, of incorporating recoil dampening technology, and a host of other refinements, in a production airgun from the start, they were always likely to be onto a winner.

A subsequent invite from the UK distributors, Armex, for a tour of the Walther production line at the factory in Germany, had me coming over all watery eyed and, of course, I leapt at the chance. Seeing the attention to detail first hand, that has been built into the LGV and its derivative models, was a special event for sure, and on test here is one of the latest incarnations of the now well established line.

The Walther LGV Master Pro is a great looking break barrel airgun, and a bold piece of airgun design if ever I saw one. For that, read ‘adults only’ too, as it’s no lightweight! Perhaps the most noticeable feature with this Master Pro version of the LGV, is that stylish beech sporter stock, and this again is aimed at the larger shooter. An adjustable buttpad, barrel lock, barrel weight, quality two stage trigger, and automatic safety, completes the initial specification; but of course, the fully tuned action and all the sophistication that goes with it, is the real hidden ace here – more of which in a moment.

There seemed some confusion with regards to weight in various technical specification charts that I checked for this model, but after a hunch that the Master Pro felt more than the listed figures I had seen, I felt compelled to double check. Two sets of scales later, both showing the figure of 9.3lbs, leads me to go with that figure, so that’s what I’m listing! With the LGV Competition Ultra tipping the scales at a hefty 9.7lbs, this Master Pro is actually a lot easier to handle! Still quite hefty, but a quick glance over the Master Pro reveals a sizeable, large diameter main compression cylinder, (evidence of Walther keeping one eye on export markets with higher power levels an option), along with the large proportions of that stock.

Walther have a reputation for high-quality products, and the LGV Master Pro exudes class. From the silky finish of the lacquered beech stock, to the deep lustrous chemical bluing of the mirror finished metalwork, this model can’t help but inspire confidence. That extended fore-end stands out, and with a subtle semi Schnabel tip, along with the super prominent cheek piece, it offers plenty of support for the larger shooter, as well as good visuals.

So just what is going on inside these marvels of engineering? Quite a lot as it happens, as the designers were determined to review every aspect of the internals. From the cocking stroke itself, to the mainspring and piston in flight; every detail has been considered, and been born in mind in the final blueprint. Minimising recoil has been the ultimate goal, and eliminating friction and wear wherever it may occur. Here’s the technical brief, as broken down by Walther:

Super Silent Technology are the measures that Walther take to limit noise in the rifle’s action. ‘Zero-play fit’ means that they have added nylon bushes and small pads around the internal bearing surfaces of the barrel lock, and the cocking rod, for example.

The Vibration Reduction System is Walther speak for ensuring an ultra-smooth firing cycle. This is achieved by incorporating piston rings made from a low friction synthetic material, with the result that there’s zero-play around the piston itself. The design has been monitored in development, and the end result is an optimised piston, that breaks on an air cushion at the end of its travel. Transfer holes are drilled for each energy level, at optimum locations, which all helps to dampen recoil. The mainspring is made from specially tempered valve spring wire, whilst a full length, close fitting spring guide kills resonance at source.

Sounds impressive, but pick up the Master Pro, and you soon realise that these claims aren’t just hot air. As per other LGV badged models, a key feature that lies at its heart, has to be that distinctive barrel locking catch, and it soon becomes part of the regime in use. To cock the action, just gently squeeze the barrel and catch together, and the breech will open easily. The barrel is fairly short at 15.5-inches, and with the front fitting, a flush barrel weight, adding no additional length or leverage, you could be forgiven for expecting a punishing cocking stroke. Well I’m pleased to report that as long as a positive downwards sweep is adopted, the effort is entirely manageable, silky smooth, and refined. Push a pellet home into the lip of the barrel, and lock the barrel up again. A small cut-out is incorporated in the profile of the breech block too, so barrel lock-up/alignment is guaranteed and super secure.

Walther produce variations on a theme, where the trigger is concerned, and this LGV model gets the XM unit, which works well, and is fully adjustable. One niggling criticism would observe that the first stage travel is a little long, but the flat surface of the blade, and sensitive mechanism, is well up to the job.

As for the firing cycle, all that technology suddenly comes to the fore. Yes, there is recoil, but it isn’t harsh, just a super slick, snap – devoid of spring resonance.

I normally start my outdoor testing regime with any airgun, over the chronograph, as this can soon reveal any shortcomings in terms of consistency. Nothing negative to report here though, just a super slick action, banging out 10-shot strings with commendable total spreads of just 10fps – recorded with both Air Arms Diabolo Field ammo, and Accupells. Accuracy was predictably impressive with a variety of ammo, demonstrating why the LGV and its derivatives have been so well regarded since their introduction. 3/8- inch c-t-c clusters using RWS Superdome in .177, shot over 30-yards, was a good start, but Air Arms Diabolo Express closed the groups down to just quarter inch c-t-c over the same distance. It doesn’t get much better!

To conclude, this Master Pro version of the Walther LGV is indeed a beast, super sized, and fairly weighty. But then let’s face it, most high-end spring powered airguns are on the heavy side, and it’s partly the price we pay for top class engineering. This is however, an excellent piece of airgun design, offering performance at the highest level.

Let’s not forget that early LGV’s hit the market considerably more expensive than they are now. A significant price reduction was mooted a while back – bad if you were one of the very first customers; but brilliant, if you’re now in a position to take advantage of one of the most keenly priced- ‘tuned from the box’ specials, currently available today.