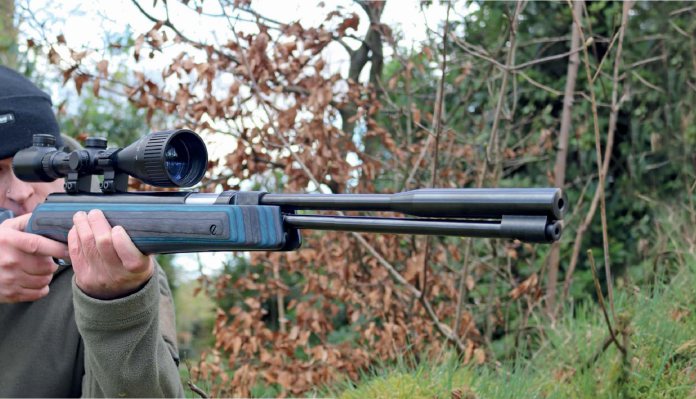 Since its inception, Weihrauch’s HW97K has been a very popular air rifle amongst both hunters and target shooters. So, as you’d expect, since the original was first launched there’s been more models added to the HW97K designation. First launched in a traditional sporter beech stock, in more recent times it morphed into what is known as the 97KT line. These featured thumbhole stocks with adjustable butt pads and options available in wood or synthetic, there’s even a model with a nickel effect barrel and under-lever.

However, one of the more stylish and now overlooked options is the Blue Laminate. Obviously, the name gives its selling point away and of course, what dissociates it from its relatives, is that the rifle is dressed in highly attractive blue laminate furniture. Never viewed as a limited edition model, it was definitely an air rifle that was here to stay and one to consider for FT springer class.

Unlike the bruising no-nonsense HW80 and at the time the HW77, it was certainly more sophisticated in both action and bodywork. Those latter two rifles however were often chosen for tuning and in their day dominated FT shooting. But, when the HW97K was launched, it was offered to the public as a dedicated, off-the-shelf option for the competition shooter. Today, it’s a criminally overlooked, due to it still being seen by many as primarily a rifle for the target shooter. However, take the blinkers off and it soon shows it’s a rugged and very reliable design for all disciplines. And when you consider it comes straight off the shelf, there’s little more you need do to improve its performance.

Laminate stocks were originally designed in part for strength and then as more hit the scene, companies decided to colour the multi-layer plywood construction for greater aesthetic appeal. Weihrauch was and still is a company who don’t go overboard in offering many mechanical action air rifles with laminate stocks. So, when the Blue Laminate was first launched it really did stand out.

To choose this dominant colour was a bold move and even today, it’s not one that’s often imitated. In fact, the planking used in the build ranges in colour variations of blue (obviously) and grey with very subtle layers of black that highlight and almost blend the other two together.

This ambidextrous stock is well finished and crafted and features a high, well-defined cheekpiece plus a full, black rubber butt pad. It’s here at the aft section you notice subtle contours that enable the shooter to get such a good shoulder fit and head scope alignment. However, unless you scope up and shoulder the gun it’s not initially apparent. But the woodwork in relation to the height of the cheekpiece, shape and rear overall form are such that the butt pad can sit lower and therefore is already positioned for natural shoulder fit. Negating the need, as can be the case on many fixed pad rifles, to unnaturally adjust your head position to suit. This in itself is something that deserves credit and like the stock colour, it’s a standout feature.

Although the butt section is quite chunky and thickset for most of its length, the neck, however, is nicely formed with a well-rounded upper section and is deceptively slim, which compliments the steep drop down pistol grip to give a surprisingly assured hold. I mention this, because and although there is no chequering or stippling on the entirety of the stock, the pistol grip design also deserves credit as it impresses with its form as you don’t feel grip aids are required. In fact, for many it allows the shooting hand to naturally hold the rifle at this point at an optimum angle to afford a very acceptable platform from which to control and reach the trigger. Grip being helped by a generous palm swell.

The forend, as you’d expect is in perfect proportion to the aft section and has a slight upward taper as it makes its way to the quite nondescript yet suitable end tip. However, combined with the pistol grip/neck/heel layout allows the rifle to sit comfortably and naturally in your hold. And although it’s no lightweight, balance and handling are spot on and if anything, the weight helps give you an even more assured aim. Also, a semi-matte lacquer finish both compliments and protects the woodwork from the elements.

The under-lever sits neatly below the barrel, held securely in the closed position by a large sprung spigot end catch that engages into the inner front section of the assembly. The design is such that cocking the rifle is a very easy affair, as once you depress the generously-sized release button with the thumb, it’s already in the optimum position to grip the lever so as to draw it back once released.

Upon cocking, lock back in the open position feels secure and the automatic cross-bolt trigger safety pops out to the left clearly showing the rifle’s ‘safe’ status. Weihrauch also incorporates an anti-bear trap mechanism, but as always good shooting practice should be adhered to, which means always keep hold of any under-lever action cocking mechanism while loading. During the operation, the sliding breech retracts back to reveal a wide and roomy loading bay, making direct loading into the high quality Germanmanufactured tube, an easy task.

On returning the underlever to its original position, the sliding breech simultaneously moves forward to seat the pellet and seal. The articulated arm that links to the spring/piston power plant has a surprisingly short and smooth cocking stroke, but such is the design, repeated operation isn’t overly strenuous. Also, a strong rubber O-ring can be seen around the front end of the lever, this ensures it doesn’t move around when placed back to the original position, so not only is it held securely in its housing but is also a quiet rifle in use.

The top of the cylinder, like many other Weihrauch air rifles of this ilk, has a generous run of well-cut dovetails with the now almost obligatory three arrestor stud holes towards the rear for rock solid scope mounting. For the test I fitted a Richter Optik 3–9x50AOE, the optics specifications being well suited for hunting and at a push the occasional HFT competition. Most will prefer something that’s set in high mounts because the high cheekpiece demands it for optimum eye to scope alignment.

The highly acclaimed, Rekord, 2-stage adjustable trigger unit with auto safety is a mainstay on all of the company’s mechanical action guns and as expected it doesn’t disappoint here. What’s often not mentioned is credit must be given to Weihrauch, as they got it right with the very first roll of the dice. Reason being, not only are the internal components finely honed, but who can be disappointed with the ergonomic, finger-friendly, broad trigger blade and the ease with which you can access the large adjustment screw.

Now, the Blue Laminate stock makes this rifle slightly lighter than the other HW97K options, I mention this as the downside of less mass on a springer with a heavy mechanical action can often be that it can tend to be front heavy. Thankfully, this isn’t the case here and when weighted correctly recoil is reduced. Proving this, the 97K produced what is best described as a slight rearward nudge on firing.

The up-graded, primary, integral silencer tames muzzle report to a highly acceptable level and personally, I’d be quite happy to use this without the optional extra moddy for hunting. If you want more sound suppression, the muzzle has a slim, screw-in end cover cap. This is removed by a 7mm Allen key to reveal the internal thread that accepts the dedicated HW97K can. However, take note you’re adding extra length, which for some shooting situations could make it unwieldy, especially in tight spaces such as hide shooting. Accuracy is amongst the best you’ll find of any production springer in this price bracket and even beyond. The .177 calibre test rifle created ½” ragged holes using quality ammo shooting from a rested position at 25 yards and at 30+ groups still easily kept within kill-zone requisites.

The HW97K comes with a pedigree that a lot of other air rifles would envy. Granted, of all the stock options the Blue Laminate won’t suit everybody’s taste, but it’s an option that Weihrauch is thankfully keeping in the range. It’s a connoisseur’s gun that is as accurate as it is stylish, it’s also the type of air rifle that crosses the divide between hunter and target shooting disciplines which is a large part of its appeal. Thanks to T & J. J McAvoy LTD for supplying the rifle on test