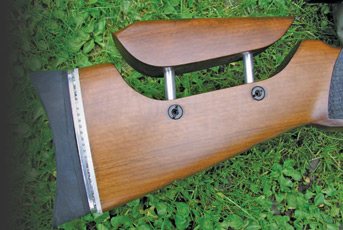 If criticism could ever be levelled at Weihrauch’s spring-powered air rifles then it would have to be in they’ve seemingly been rather staid in their ways. In other words they designed a great break-barrel the HW80 and under-lever in the HW77 and since then have basically churned out variations on the same theme.

Do What You Do

Trouble is Weihrauch do what they do well – so well in fact that it’s unfair to criticise them for this approach to airgun manufacture. Even more reason not to criticise is the simple truth that anybody buying a Weihrauch is getting a rugged, reliable and quality manufactured springer. Safe in the knowledge it’s got a time honoured pedigree of top quality German engineering with one of the best trigger units available for a sporting air rifle – the highly acclaimed Rekord unit.

Granted, the company have now broken from tradition, notably and most recently with the introduction of screw cut barrels on some models for the exceptional Weihrauch silencer. However something they’ve had in their stable for over a decade is the HW98. When I reviewed this rifle it hooked me and shortly after I was the proud owner of one in .177 calibre. (Editor: Same here!)

From the macho-looking bull-barrel to the stylish target-style adjustable stock it won me over within hours. That’s a brief history to the rifle here on field trial but there’s much more to discover as I put it through its usual paces on a summer outing, stalking a few rabbits for the pot.

Some traditionalists still favour springers for the simple fact you manually create the compressed air for each shot, therefore never running out of power as can happen with a PCP if you let the reservoir get too low.

Cocking is simple with this full power 12ft lb springer, as it easily unlatches at the breech and using the weight length of the fully shrouded barrel it draws down silky smooth to solidly lock in place. Simultaneously the automatic trigger safety engages so you can thumb a pellet directly into the barrel. Cocked and locked as it were, I set off in search of my intended quarry.

The grass was high in parts making the rabbits hard to spot so I began my approach into the field by stalking close to a slight banking adjacent to a fence line. The foliage of the wood and bushes behind me coupled with wearing full Realtree apg camo helped disguise my outline and blend into the background.

The first shot that presented allowed me to take up a prone position alongside the fence and even then I was still high enough to see the rabbit’s head clearly above the relatively tall grass that stood between me and the target. It’s while adopting this position you really do come to appreciate the HW98’s stock design both at the front and rear.

I’d already adjusted the sliding rubber butt pad and height-adjustable comb accordingly. Rather than drop the pad as I usually do on these types of stock, I left it in the fixed position and lowered the comb. This allowed me to tuck the rifle in my shoulder and get my head down to comfortably sight through the Hawke 3 – 12 X 50 AO IR Nite-Eye SR6 scope for optimum head to scope position for the prone shots I knew I’d mostly be taking.

Get A Good Grip

The deep, slab-sided forend always sits sound and secure in the hand with the elbow of my leading arm rested on the ground to cushion recoil. Even if taking a standing shot or more stable kneeler this is one rifle you’d not have trouble holding securely and steadily on aim. The trim forend coupled with the seven, deep elongated slots that run along either side make it extremely comfortable to hold.

Also, the stippling that runs along almost the complete length of the underside of the stock sticks to your hand (gloved or un-gloved) like Velcro. The same finish also adorns the pistol grip to the point it fully wraps around the slim neck. It’s also ‘blacked’ making the rifle cosmetically very attractive and distinctive.

But back to the plot - easing myself into position I thumbed in the automatic safety button positioned on the left of the rear of the air cylinder to disengage, then slid my forefinger onto the ridged trigger blade in readiness for the shot.

If It Ain’t Broke…

Although Weihrauch has radically changed the look of the standard issue rifle they’ve wisely not changed the fundamentals. What more can be said of the Rekord trigger unit that already hasn’t been said many times before? A 2-stage adjustable trigger mech that’s possibly the finest for a springer and the nicely curved polished alloy blade is ideally positioned for optimum control coupled with the steep angle of the pistol grip. A slight squeeze sent a Weihrauch .177 FT Special 9.1-grain slug precisely into the kill-zone of the rabbit’s skull. As it keeled over back out of sight in the grass I could just see a few twitches of a hind leg, then nothing as it died almost as soon as the lead had left the muzzle. Another couple of major plus points are the low recoil and report on discharge - in the field to me this really matters!

I lay down on the slight brow of a ridge overlooking a small patch of grass, obviously being used as a rabbit lawn, where they take in the sun and nibble outwards making the lawn larger as they go. In no time I had another rabbit to make up my brace.

The HW98 isn’t a heavyweight and even with a relatively large scope on board only tips the scales past the 9lb mark. As for handling its overall dimensions of a tad over 43” from butt to muzzle, combined with the superb stock design make this a rifle suitable for many airgun hunting duties.