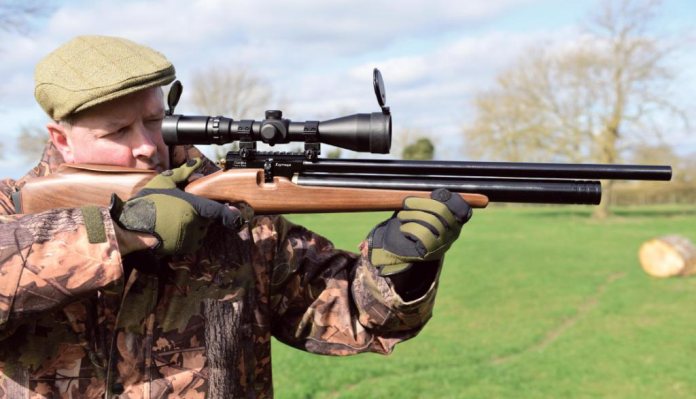 Sure Shot Airguns have proved an extremely go-ahead company over the last few years, bringing us a steady flow of airgun brands from around the globe. Their latest range of guns are an intriguing blend of conventional wisdom in airgun design, combined with some quirky twists along the way. Zbroia hail from Kharkov, in the Ukraine, and the Hortitsia 450-220 model on test here, is a multi-shot, bolt action PCP, with a really distinctive profile

Long & the short of it

Those 450-220 figures incidentally, relate to the barrel in millimetres, and cylinder capacity in cc, respectively. This is the full-length version, but a shorter model is also available in a 330-180 specification; so, lovers of carbines aren’t left out. Take a close look at the specification, and it soon becomes clear that there are plenty of features built in with this rifle. An unusual, rear-locking bolt system, 2x 10 or 12-shot rotary magazines (dependent upon calibre), fully shrouded barrel, Picatinny scope rail, 2-stage adjustable trigger, manometer, regulated action, and probe charging.

Interestingly, the actions are available in either black finish or red, and the sporter stocks are available in standard wood, black or white, so there are plenty of options. It is of course, the sporter that initially grabs the eye, and with a super sleek forend and nicely shaped full drop down pistol grip, there’s plenty of design flair to get excited about. Look closely, and curiously, these stocks are actually fashioned from several different pieces of wood, but that stylish configuration, coupled with an attractive matt lacquer finish, all work very well. There’s a roll over Monte Carlo cheekpiece and a dedicated right-hand palm swell, so these models buck the trend for ambidextrous woodwork too.

This model gets a chunky main compression cylinder, and in the longer spec, shown here, that should mean a sizeable shot count, which I’ll come to in a moment. All the metalwork, including that cylinder and the full length barrel shroud, are treated with chemical bluing, and whilst it may not be as mirror finished as some brands, it’s all certainly done to a pleasing standard.

The Hortitsia’s action is regulated, with the reg fitted to the base of the removable air cylinder, and set to around 90-bar. This means that the fill pressure used for the main cylinder isn’t so critical, as the gun effectively finely meters its air intake for each shot. Maximum fill pressure with this model is specified as 300-bar, but the recommended pressure is more like 250-bar. Stick to this, and you’re causing less stress on internal components, and the shot return will still be significant. Unusually, these guns come supplied with two charging adaptors- one is a neat, snap-on design that can easily fit into a Foster-style female end, and then straight into the gun’s inlet valve. The other is a threaded standard design. In practise, the push-fit snap-on variety makes life so much simpler, especially when charging different makes of rifle, where constantly switching over adaptors may be required. As for the charging, I would always recommend checking that the probe is still fully inserted, after a short interval into charging, just to be safe.

Filling the rotary magazine (as mentioned, two are supplied) is pretty straight forward- just push home a pellet into each chamber, making sure they are perfectly flush. Now, we just need to fit some glassware before we can begin, and here we need Picatinny-style mounts, with a cross bar design. Personally, I can’t help thinking Picatinny rails are overkill on a totally recoilless pneumatic airgun, but the trend admittedly seems to be moving the other way.

With a scope all locked into place, it was time to see what the Hortitsia could do. Cocking the action is all done with the one hand, but that neat little catch to the back left of the breech block, just needs to be nudged with the thumb to the right, which then releases the bolt. Now pull it back in the normal way, until the hammer mechanism is heard to cock, and the loaded magazine can now be pushed into its slot within the breech block from the right side. At this point, it’s worth observing that neat design keeps the mag lower than the block, so there’s no interruption of the scope rails, as we see with some multi-shots from other brands.

Push home the bolt, and it automatically locks and the shot is ready. Subsequent cocking indexes the next shot from the magazine, and on test, it all worked without a hitch. After an extensive test of the shot cycle over a chronograph, from a 250-bar fill, I managed pretty impressive 168-shots, with a total spread of 23fps, which is pretty damn good in my book. JSB Exact pellets were used, straight from the tin for the record!

In use, this rifle feels nice to handle, courtesy of that welldesigned stock, and whilst it’s not super quiet, that full-length shroud does at least take away any harshness from the muzzle. I really did like that unusual bolt, and the neat way that it automatically locks into position as it’s pushed forward. It’s slickly designed, and certainly helps maintain the unique feel that this rifle has.

The barrels fitted to these rifles are made in-house by Zbroia, and on test, I have to say, results were encouraging, despite them specifying in their literature that this model is designed to shoot better than 20mm over 30-metres, which in my book is no great shakes for a modern PCP. They are clearly covering themselves though, as my tests recorded ¼-inch groupings with both Air Arms Diabolo Field and JSB Exact, over 25-yards. A great start then, and over 35-yards, I managed easy, sub-½-inch clusters, so the Hortitsia’s Zbroia-made barrel is clearly up to the job.

The 2-stage trigger is adjustable for travel and pull weight, and in use proved reasonably light and predictable, although with a small amount of creep, it’s still a little vague when compared to some of the opposition. That tiny brass button just forward of the trigger, is a manual safety catch incidentally, so you don’t need to worry about it, but it’s there if necessary.

So what was my lasting impression? Well, as mentioned, the original approach to the bolt arrangement, overall layout, and striking yet traditional looks, mean the Zbroia Hortitsia has much going for it. That said, this is an ultra-competitive sector of the market, and at this price point, there is some strong competition out there. A two-year manufacturer’s guarantee shows real confidence in the product however, so peace of mind is assured on that score.