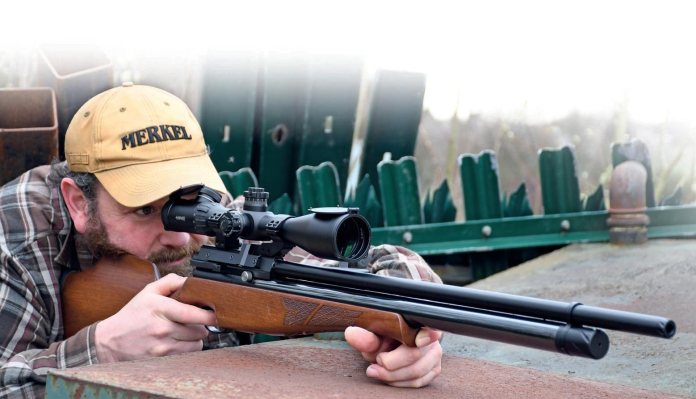 Air Arms has long been an industry leader with their rifles distinctively marked ‘Made in England’. The S510 Xtra FAC is a graceful looking rifle in its Beech furniture, the shrouded barrel with 22.5” overall length shielding a 19.5” Lothar Walther match barrel within. Diagonally machined flutes wrap the barrel’s thread protector, which covers a ½” UNF Female thread for additional moderator. The full-length air reservoir shows a matching design on the bayonet filling valve’s cap. The barrel and reservoir are joined with a figure-8 aluminium bracket showing Allen screws to lock it in position, so don’t be too brutal when tightening as any misalignment will affect zero. I considered this during the review and treated it with caution. Once set up, it didn’t show any effects from normal day to day handling and use on rest bags.

Matt black hard anodising on the aluminium barrel shroud contrasts the glossier blued steel air cylinder, which is discreetly marked with a serial number, biannual inspection notification and 200bar recommended filling pressure. Both components flow into the sporter stock, showing a tulip tip to the slender, yet adequately hand filling forend. There is some attractive chequering on both walls and the underside for grip. A recessed underside manometer in front of the trigger guard displays pressure, it’s smartly surrounded with a polished aluminium bezel to protect the glass. Twin screws span the trigger guard with a third larger bolt ahead for the action. Air rifles of similar price to rimfires and centrefires often seem to provide better stock design and manufacturing standards, with Air Arms being a fine example.

The deeply recessed trigger guard aids the sleek lines with plenty of space for a gloved finger. Inside is a 6mm wide, shallow curved blade and at the top is a cross-bolt safety catch, which slides right for SAFE and left for FIRE. It’s manual and physically blocks the trigger from pivoting. Its super-crisp two-stage operation is fully adjustable, with Allen key access through the base of the trigger guard. The test rifle was delivered beautifully set up with a 300-gram first stage and 550-gram second stage. I like the feel and performance and have used the rifle through three seasons now. I got used to its delicate performance wearing gloves in winter, but if I knew from the beginning how much I would end up using it, I would have added a few more grams to the pull weight.

Walnut is a beautiful material but beech does save a bit of money and like any timber, can be accurately CNC machined to carve the most delightful, almost customised shapes. The open radiused grip features a delicate right-sided palm swell on the slightly ‘handed’ stock, dictated more by the cheekpiece rather than hand position, yet it’s still OK to shoot functionally ‘off handed’ from the opposite shoulder if the situation dictates. The grip shows a rosewood cap and offers plenty of space for your fingers, with the overall hand position offering an 80-85mm reach to the trigger blade. The recoil pad is ventilated, making it pliable at the edges, and it moulded into the shoulder without becoming spongy, plus some ribs aided grip against clothing.

I found the 510 intuitive to shoot and appreciated the dimensions when seated comfortably at a bench for accuracy testing or when shooting out in the field. The Xtra’s natural balance and pointability was quite sublime for a full-length rifle.

Lightweight, walnut, left-hand, and thumbhole stocks are available, with the lightweight looking the most physically ambidextrous, although all actions show the cocking lever remaining to the right side.

Cocking lever travel is delicate, quiet and smooth. When fully opened, the magazine pulls out of the receiver’s left side. Filling requires manual rotation to load ten pellets and once back in the rifle, the bolt is closed to push one through into the breech. Each time the lever is cycled, a small pawl/claw to the right side of the magazine well rotates the next pellet into position, but without a specific detent holding the mag securely in position laterally, it can work loose. The opposing right side pawl effectively presses against the magazine and intrinsically wants to push it free. This is not an ‘if’ but a ‘when’.

The mag worked free several times in normal daily usage and it takes only a millimetre of clearance for the pawl to miss the mag’s pellet filled cylinder, failing to rotate it fully when cycling the side lever. Now misaligned, the lever will not close to chamber a new pellet or snag said pellet causing a flyer. OK, a check on magazine seating is no huge problem but better avoided. In my opinion, it’s a design weakness to be relying on friction alone, especially as the pawl exerts a repetitive force against it.

A mid-position for power?

The Xtra FAC version of the S510 features a power control dial on the right-hand side of the action, with its indicator on the left. On the .22 tested, dialled all the way clockwise, muzzle energy drops to 7 ft/lbs, increasing to 32 ft/lbs when fully anti- clockwise. There are no detents, so I found it most reliable using the two repeatable trajectories at one ‘end’ or the other to maintain consistency when swapping. If you choose to, you can shoot at whatever power you like anywhere in between but you will have to check zero, preferably at extended range to confirm trajectory. At 20m, low to high power showed a 60mm shift up and 15mm right on target. I specifically wanted to test the return to zero when the setting was altered and I can confirm if you stick to either limit, it’s perfect.

As well as .22, the Xtra is available in .177 and .25 calibres with corresponding power ranges and maximum shot capacity. At 32 ft-lbs, my rifle agreed with the manufacturer’s suggestion that the ‘Series 7’, fully regulated rifle would produce 55 consistent shots. Reduced power settings will increase this, so adjust to your taste. 10-shot strings using Air arms pellets saw 1 FPS extreme spread, which I thought was superb!

I found the gun stunningly accurate to shoot and that is a rare comment for me. No sling studs are included so I was restricted to rest bags, but even so, I clover-leafed pellet on pellet, almost boring for a professional problem seeker like me. A distance of 30m in breezier conditions increased group sizes a little but it was noted that occasional flyers were linked to misfeeds from the mag, with likely pellet skirt damage when it had worked loose. It is ignorant to focus purely on what any gun can do on paper, this is one of those rare guns that through internal airflow management, superb trigger and delightful ergonomics, becomes hard not to shoot well, but did highlight the fiddly magazine problem. Otherwise, I can only complain the valve cap perhaps lacked grip for fingertip removal and needed care not to be clumsy with a fist-sized grip and disturbing the barrel support.

Consistency over the chronograph and on target was confirmed on the power scale, it’s a shame that perhaps a central detent wasn’t incorporated to give a third ‘known’ power setting that could be returned to reliably. The shrouded barrel offered superb sound suppression with only a slight increase discernible at 32 ft/ lbs when compared to 7 ft/lbs.

Don’t judge a book by the cover

I have never owned an Air Arms, always feeling the gracefully organic looks of the stocks clashed with the mechanical angularity atop the timber, but it’s quite logical to me now. The softer wooden form is a bridge from man to machine, on a delightful shooting tool restricted from the highest echelons for the sake of a mechanical latch on the magazine.

Airgun stock makers could shame a lot of centre/rimfire rifle makers by demonstrating what can be done with a simple hunting rifle’s stock geometry. You might argue they don’t have a reciprocating bolt shaft and handle to work around, which is true, but considering many rifles have an excessive gap between bolt and stock anyway, it can look a bit lazy now that optical riflescopes, rather than iron sights are the norm. Adjustable cheekpieces offer some benefits, yet many are too bulbous, so this Air Arms Xtra with a 14 ¼” length of pull and fantastic supported head position, provides an exceptionally well-aligned eye to scope layout, which is a refreshing change.

An exceptionally nice rifle for dynamic hunting use. It’s almost ridiculously easy to shoot well, to the extent there is no challenge other than external ballistics, yet it is held away from greatness by the single factor of the magazine occasionally working loose and causing misfeeds.