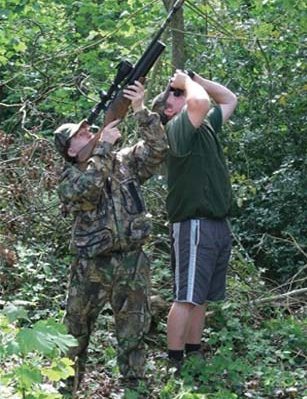 With the choice of hi-power ‘super- airguns’ now available, I feel it high time I began to address the subject of how to use any FAC-rated air rifle to be more versatile at unleashing the extra-power they offer. In past hunting articles I’ve sometimes featured my much favoured .20 Calibre FAC Daystate AirWolf and it has undoubtedly proved itself over hill and down dale… Shooting Blue Hares in the Highlands of Scotland, to tricky brancher shooting in the Black Country. All have been well documented so I’ll mainly use this rifle as an example to illustrate ‘adjustments made’ for certain hunting situations - one being what determines my set zero, and as you’ll soon discover this is dictated by many more factors than just the rifle calibre and the power level it’s running at. I also feel you should carefully consider the scope you choose to fit to any FAC-rated gun – specifically the reticle design it holds. Before we had as many options of multi-aim-point reticules as we do now I used to use a standard Mil-Dot. Choose and use right, because a suitable optic will help you achieve the precision accuracy a modern day hi-power air rifle is capable of.

I’ll begin by briefly relating what happened ‘behind the scenes’ to achieve the Blue Hare challenge I set myself. Previous to the trip, I spent a long time practising on home turf, honing up on my accuracy skills at different ranges with its usual set zero of 50 yds. So off I went, confidence levels high in my shooting ability and chosen rifle/scope combo but upon arrival, I realised my previously set zero would have to be changed. Let me explain:

I’d never shot over ground as rough as that of the high Glens. Thankfully the gamekeeper/stalker who helped me attain my goal strongly suggested I take a ‘few’ practice shots over Peat Hags on similar terrain nearby and at awkward angles on targets set on higher or lower ground from my shooting position. Only then did I fully come to realise the effect topography and indeed water can have on a pellet’s usual and expected trajectory – and that applies to any power of air rifle.

My shooting was quite noticeably affected to the point I decided to set a 40-yd zero and lower my cut off point for longer range shots to approximately 70 yds. Not far? Well you try it when the wind can swirl back on itself, and the ground can suddenly drop 20 – 30 yds down between you and the target, and then include water in the equation plus angle of fire and well… Getting a little more than tricky isn’t it? My hosts advice and my adapting to the situation proved to be the right move as I achieved my challenge and I learned much from my madness or should that be all that ‘earth and water.’

Incidentally, I didn’t/couldn’t use ballistic software to ascertain what the trajectory should be – obviously due to the terrain I was shooting over. That meant after setting a new zero it was done ‘old school’ with targets set at 5-yd intervals from my shooting position to fully suss out my new trajectory.

Another example of the benefits of tailoring the rifle to suit a certain hunting situation is again one I’ve written of previously but not how and why I specifically set the rifle up for this trip. The shoot was when I was invited for a spot of brancher bashing in the Black Country by my mates at Sandwell Field Sports. Now initially you’d think there’s no big deal there. However, a few days prior to travelling down I’d noticed the trees at my local rookeries were far more advanced leaf than usual for the traditional ‘12th May – brancher day.’

I realised this might not be as easy as it was back in the day. Yes, the days when it was like shooting fish in a barrel as branchers clung onto almost bare twigs or the side of clearly visible nests high above. As expected, when I reached my destination the wood the rookery was in was even more advanced in yearly ‘bloom’ than back home – in parts the canopy above was so dense you could hardly see the nests never mind the birds!

Now due to forward thinking I’d taken my ‘.20 Cal FAC Wolf,’ as well as a legal limit 12ft lb air rifle – the reason being a simple and practical one. I knew the branchers we’d see would soon wise up and simply hide ‘behind’ the foliage of upper leaves. I’d also previously set a 30 yd zero due to the closer range shooting I’d be doing and had practised at very steep upward angles at leaves on trees.

Now the other airgun hunters shooting with me that day were crack shots but with only 12ft lb air rifles the chances they got as the birds sussed how to hide soon dwindled to almost none. With my more powerful Daystate at times I could smash through a few leaves and very small twigs to bring down the crafty wanna be rooks.

Nothing had changed in terms of the familiar brancher crick in the neck and aching back from continually looking up and taking high shots. What had changed though was due to my superior firepower my tally accounted for two thirds of the day’s bag. Why I took that rifle on that trip should now be obvious. With a 30 yd zero, the trajectory is very forgiving even for steep and awkward angle shots. Plus I could take full on body shots because the power the pellet was fired at easily gave enough ‘oomph’ at the target to bring the birds crashing down stone dead.

I hope this article has helped dispel the notion that FAC air rifles are little more than big boy’s toys or the lazy-man’s air rifle. Hopefully many of you reading this now realise any calibre and power level of FAC-rated gun has its limitations and certainly isn’t a ‘magic wand’ to long range success. However, use the extra power at your disposal correctly and they can become even more versatile especially if you fine-tune your combo using guide lines and examples of specific hunting situations I’ve previously outlined.

There are many other instances and tips I could relate such as the difference a change of pellet weight can make. Suffice to say, I hope to return to this subject at a later date to offer more advice and one last thing I must say is we should feel privileged to have a myriad of ‘specialist’ hi-power air rifles to choose from.