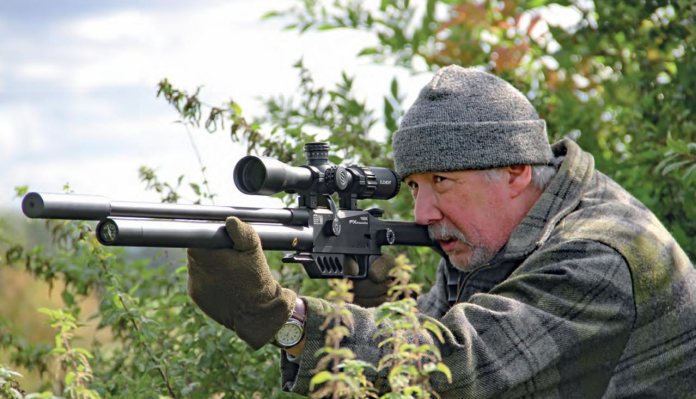 FX has certainly turned the airgun market up on its head with their innovative smoothbore PCP technology, as it has become the envy of most other makers worldwide. I am not a PCP chap, more of an old-fashioned tuned springer sort of shooter, but when a new DreamLine Lite FX arrived, I was impressed.

The Dreamline range is a modular system allowing alternative configurations, so you can adapt it to suit your changing shooting needs from a sporter to target or even field target airgun. It’s light at 5.55lbs and comes with a fixed slimline air reservoir and changeable Smooth Twist X barrel system to switch between calibres, twist rates and lengths. The anodised action houses a high-capacity rotary magazine, FX’s very good adjustable Match trigger system and power adjustment switches for user interaction.

This Lite version has the stance of a lightweight carbine and has a cut-down stock with a Hogue pistol grip and a removable, AR-style synthetic stock.

What makes it tick?

The redesigned receiver is made from anodised black aluminium and incorporates a breech with side-lever operation that has a 220cc in-line air reservoir attached. This air cylinder is refilled via a QD probe attachment at its top and there is a rotating dust cover that keeps out dirt and debris. It has a max fill pressure of 230 bar.

There is a side wheel that changes the airflow (MAX, MED or LOW power settings) and at the rear of the action, there is a valve adjuster that alters the strength or travel of the hammer spring. This will affect the air release from the regulator to alter power. It is marked max and min at 12 and 6 o’clock and then five equal divisions on either side of 1 to 5 and A to E.

Cocking is achieved by FX’s super slick side-lever system that has a replaceable probe for different calibres. It has a long but thin, ribbed cylindrical handle and is very precise and easy to operate.

The magazine is a removable rotary type that slips into the breech from the right. However, it’s quite tall, so you will need some high scope mounts to clear it, which caught me out at first. In .22, you have a generous 18-shots and these are so easy to drop into this reliable sprung rotary system.

The trigger is superb and is a matchgrade unit in every way. You have 2-stage adjustability to below a 1lbs pull weight and it breaks incredibly cleanly, with no overtravel or creep – excellent. The simple side-toggle safety is also precise and easy to use.

Each barrel is match grade and free-floating with a ½ UNF thread pitch for sound moderator fitment. Best of all is the revolutionary FX Smooth Twist X Barrel System with a barrel liner system. This system works by having the rifling impressed from the outside onto what is essentially a smooth bore, as compared to having regular rifling grooves cut into the barrel.

There is also the ability to change the core barrel liner to obtain various twist rates and thus match the best for different pellets that you might want to shoot. FX PCPs are all about optimising performance and they have not missed out anything. I really like the attention to detail.

Stock orientation wise, this Lite version has a very simple, yet effective, rear synthetic, quick release stock section with a nice black rubber recoil pad. Just unscrew the locking wheel behind the action and the stock can be removed. It can then be exchanged for tactical, sporter, laminate or whatever you fancy. The pistol grip system is an AR15- inspired design and is ambidextrous with a good Hogue version fitted, giving a nice upright feel. This is also part of the lower chassis system that the action sits on, and there is an extended (albeit short) Picatinny rail for bipod fitment, as the air reservoir forms the forward support instead of a physical stock. I actually really like the arrangement, as you could buy a laminated sporter stock and drop the action into it or replace the stock for a more Tactical version. It’s very versatile.

The first thing you probably want to know is how many shots per charge was I able to get from this .22 calibre FAC Lite? Well, filled to 232 bar with an FX dual pump, it took 72 pumps from a starting 150 bar pressure. I was knackered, buy a 300 bar tank! With the power adjusters set at MAX front and back, I used the FX 18.1-grain standard waisted pellets – SEE AMMO TABLE. You will want to play around with those two power adjusters to fine-tune your pellets and accuracy to match the power and shots per charge that suits you.

So, with the adjusters at the front and back on MAX we had 886 fps for 31.4 ft/lbs. The MED setting generated 878 fps for 30.4 ft/lbs and on LOW it produced 627 fps for 15.8 ft/lbs. So, not a lot of difference between MAX and MED but low power really dropped the velocity for closer shots or more shots per charge.

The FX Dreamline Lite, especially in .22 FAC, maybe a gun that turns me onto PCP rifles! It is very well made, lightweight and superbly accurate. Plus, I love the high level of shots per charge at a superbly regulated velocity that translates to excellent accuracy with the correct pellets.