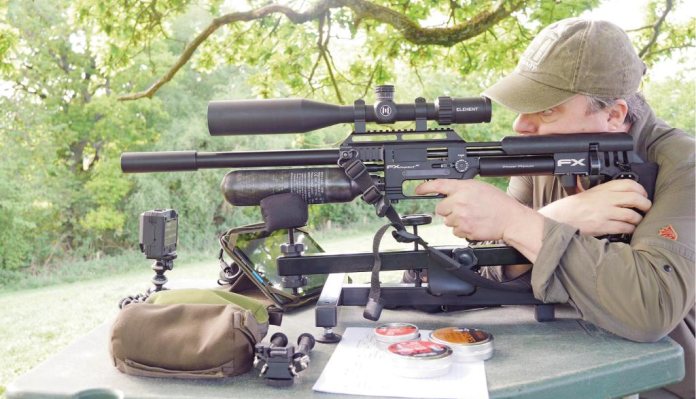 Thanks to the generosity of UK distributors, the Sportsman Gun Centre, I’ve had two FAC Impact Mk IIs on test. A standard model in .25 calibre, and a Compact in .22; and I’ll give these guns their own reviews, as this article is just to tell you why the FX Impact is in a league of its own. In fact, I think running an FX Impact Mk II is literally a new airgun sport. Cartridge-rifle shooters who understand about precision reloading and ballistics will get this right away.

Other FAC air rifles you scope-up, zero, and then take hunting, and you can do this with the Impact Mk II as well, and to devastating effect, but in my view it’s seriously missing the point. This particular rifle isn’t about that. It’s about getting projectiles to fly as perfectly as the leading-edge of airgun technology engineering allows. To achieve this you need to learn how to tune, and to enjoy tuning a PCP. Don’t see it as a hurdle to jump and leave behind on the way to a head-shot/ bulls-eye finishing-post. Relish the race. Cherish the challenge! Put your hand-loader’s head on.

Impacts come well setup from the factory and complete with MV/ME stats for a specified pellet type in the calibre supplied. But no way did the FX design team create a rifle that offers a choice of barrel lengths and twist profiles in five calibres from .177 to .35, features four separate, external, useradjustable tuning controls, and now boasts a massive post-regulator air chamber called the Power Plenum, just so you can run it in bone-stock configuration as long as you live. No way. So, if you don’t mean to exploit all that, check out what the Dreamline series has to offer and save some cash.

If you’re still reading this, then I guess you want to know more. I’m still learning, and loving it, so don’t take what follows as gospel, just as despatches from an ongoing journey of discovery.

My first principle is that the rifle’s primary function is to optimise the ballistic performance of the pellet. This determines how I set it up. You could run it to extend the shot count, or to increase its stealth, or to baby the internals, and these outcomes may be compatible with ballistic optimisation, but each to his own. The second principle is to measure and log the variables. Not doing so carries a high cost in time, air, ammo and frustration. Use a chronograph, callipers, and preferably a weather station, as temperature and atmospheric pressure make a difference, and log all your data securely.

A chronograph is essential, because each pellet and barrel combination has a velocity sweet-spot that delivers optimal barrel time (air-efficiency and harmonics) and in-flight stability (spin/drag). Find the sweet-spot and groups will shrink. Basically, velocity numbers are what lets you balance pressure settings, barrel harmonics and pellet stability. The chrono is also crucial because every tuning adjustment produces a short series of erratic velocities as the new settings ‘settle in’. Without a chrono, you can’t tell when velocities stabilise again; and until they have stabilised any data is just ‘noise’. FX make a really handy smartphone-enabled pocket chronograph that uses Doppler radar. Hanging it on the barrel gives the most consistent readings, but can affect harmonics and point of impact, so I prefer to mount it on a tripod on the shooting bench and run the rifle in a rest to maintain consistent alignment.

The callipers are for measuring two of the adjustment settings. If FX would etch micrometer scales alongside the respective controls, callipers wouldn’t be necessary, but at present they are the only way to return to a given setting.

Finally, just listen. The bullpup configuration puts the valve action close to your cheek, so you can literally feel how much stress it is under as you take the shot.

The simplest way to tune is to adjust the power wheel on the L/H side and watch what that does to group size and to the visible stability of the pellets in flight. Chances are, you will see a difference, and one of the 10 settings on the wheel will be obviously ‘right’. If more power is required, you can change the range the wheel operates across by increasing or decreasing the hammerspring pre-load with an Allen key. The basic technique here is to max it out, then dial down the power wheel unto you find a sweet spot (for both these operations the rifle absolutely needs to be de-cocked first).

High pre-load gives a short/sharp valve strike, but this can become harsh. At this point, adjusting the regulator to increase the pressure in the plenum – the air chamber between the regulator and the main valve – will increase air flow, reducing your shot count but increasing power and harmonising the system (a screw inside the trigger guard gives easy access, but follow the instructions or you’ll break your rifle!). Cartridge reloaders might like to think of the main bottle as a powder canister, the regulator as the powder measure and the plenum as the cartridge case. The FAC Mk II impact has a supersized ‘Power Plenum’ that can effectively hold a magnum charge of air.

Finally, a valve-travel adjuster sits between the barrel and the neck of the air bottle and controls how quickly the valve closes after firing. I find it the least-predictable governor of velocity and harmonics, but good for reducing the standard deviation. For others, it’s the go-to control… I guess there’s still plenty of room on my learning curve!

Getting the perfect set-up for a given projectile takes time, plenty of ammo and air, a still day, a well-kept log, and a fair bit of headscratching, but quickly becomes as involving and rewarding as hand-loading precision rifle cartridges. The day you shoot your first sub 1-inch, 110-yard, 5-shot group with an air rifle is truly one to remember!