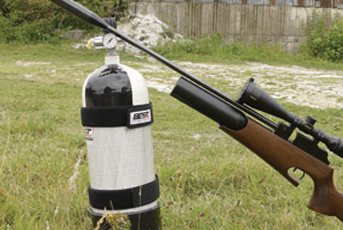 I’m no airgunner, in fact I’ve barely used one since I discovered rimfire and centrefire rifles at the age of 13. Up until then and like just about every boy, I owned a break-barrel, well in my case lots of them starting with an old BSA Meteor. I killed a few rats and sparrows but was no hunter, in truth I was mad about guns and at the time that was all I could have, so my back garden became my range. All that ended when I joined the Army Cadet Force and moved to the dark side and ‘real rifles’...

46-years later, as the editor I read and sub up all the articles, which means I am looking at at least three airgun tests per month along with related hunting and technical articles. All this tends to rub off so I think I know a good bit about airguns, ‘on paper’ at least!

As a firearms hunter I could see little point in airguns, as they all seemed very close range and underpowered. Why bother stalking up to a rabbit to shoot it at 25-yards when my 17HMR can reach out to 200? But I had come to realise there are times when only an airgun can deliver the goods in terms of short range effectiveness with fewer safety issues such as ricochets. Plus they are inherently accurate and quiet, but hey so is my 22 LR sub-sonic rimfire.

This was brought home to me last year when I was asked to do some pest control on rabbits near a horse paddock. Looking at the job I realised that a 22 LR was not going to cut it, as there was too much chance of an accident and hay burners are expensive and I did not want to be hitting one!

Rapid FAC-rated. I decided on a .20” cal, as it looked a performer on both trajectory and ability.

A call to Theoben and a chat to a chap called Toni confirmed that yes they could get me an FAC-rated Rapid in .20” cal set up at 28 ft/lbs. As it happens Toni runs one of these and when he told me the typical performance he gets I was amazed. I was expecting the gun would be pushed at 50-yards, but not so; as I was to discover!

Ok I can see a lot of you serious airgunners thinking well dah… that’s obvious. But remember I come from a purely firearms background and put airguns in a very specific bracket. Good for short range rabbits etc. and accurate enough for FT and HFT, but apart from that forget it! For that I apologise.

his first article is more about the why and how and I will get more technical as the series proceeds. But it would be a very steep learning curve as a pre-charged pneumatic (PCP) is very different from running a centrefire or rimfire rifle. The biggest difference is the fact the rifle carries a separate, integral power source in the form of an air tank and in the case of the Rapid it’s a removable buddy bottle, which needs filling.

In my ignorance I thought I could save money and hassle, as lugging a big diver’s CONTACTS:?  Theoben Engineering, 01353 777861 www.theoben.co.uk?  Best Fittings, 0845 456 1185C www.bestfittings.co.uk?  Nikon scopes – Highland Outdoors,  www.highlandoutdoors.co.uk?  Galaxsea Divers, 01473 711818 (friendly and helpful bottle charging) www.galaxseadivers.co.ukbottle around is not like cracking open a box of ammo to fill your magazine. So assumed a hand pump would do the job with less hassle - wrong! Pete Wadeson warned me about this and said yes they do work, but are better for topping up as you would not really want to pump one up from empty. Yeah, yeah OK, well Pete looks like you are right!

So I rang Best Fittings who know a thing or two about PCPs and after Olly had stopped laughing when I told him about the hand pump, he suggested they would kit me out with a complete rig for the Rapid including one of their new, carbon fibre, 7-litre air tanks. You’ll be hearing a lot more about this and other kit in future articles. But first the icing on the cake - the Theoben Rapid FAC!

To be honest I have never seen a PCP that I would call good looking as none have the fine lines of a hunting rifle. Different as opposed to ugly would be fairer! However, the Rapid has the recipe as it’s a bolt-action, magazine-fed mechanism, so familiar! The walnut stock is built for purpose with a high/sculpted comb/cheek piece and a drop-down pistol grip and decent recoil pad. The forend is half-length with a beak on the underside that just sits around the neck of the buddy bottle, which protrudes forward. It initially felt a bit short in the supporting hand!

There’s no trigger guard just a wooden extension coming back to cover the blade with an in-line safety catch in front. The action is aluminium and comes with 1” rings that offer a small degree of positioning adjustment. The bolt is a big, straight ball-ended design that locks down into one of two positions – forward to fire and rearwards for magazine and bottle changes. On the .20” cal gun the 23” tube is a selected Walther unit topped off with Theoben’s Vortex silencer.

I fitted a Nikon 2.5-10x50 Pro-Staff scope with its unique, multi-ring holdover reticule and the package came up naturally and handled beautifully. It’s funny, now having a proper airgun I could not see what all my previous prejudices were about, and I wish I had wised up sooner!

Next month I get to grips with filling, blow an air seal, consider ammo and see how it performs and maybe a little hunting!

Engineering and Richard and Olly at Best Fittings for their help and guidance.