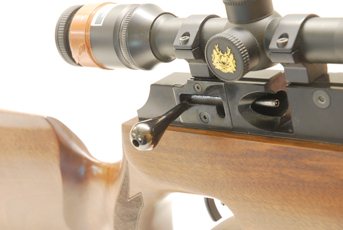 Since last month I have got more familiar with my Theoben Rapid, .20” cal, FAC-rated, 28 ft/lbs PCP. As we shall see I managed to take it hunting and boy was I impressed as it gave performance well beyond my expectations! Plus after some hassle I even managed to fill it with air!

The Rapid offers a bolt-action mech and this .20” cal gun feeds from a 12-shot magazine that locates on the left. In comparison to a rimfire there are some differences, the bolt movement feels sprung and the return stroke does need to be understood to get a smooth cycle. The safety lever is positioned in front of the trigger blade and pulls back for safe. The first time I did this I pulled it back and I could feel it click into position, I then tried the trigger and it fired. I then discovered the lever can move back even further to REAL SAFE – a useful lesson learned on the range!

I do not like the half trigger guard that is integral to the stock as its open at the back and could allow something inside. The magazine is great as it’s simple to fill, reliable and has an integral shot counter on its rear face, which is easy to see from the firing position. What I found odd is the lack of securing catch, with the bolt open it just slides in from the left and sits there, admittedly with the bolt closed the probe physically locks it in position.

Trigger pull is superb and there’s about ½” of take-up followed by a very short and crisp 1lb break and it’s also adjustable but I did not touch it. The rifle is well proportioned and comes up into the aim and sits there naturally with a near perfect eye/scope position; it’s uncanny how well it points. It is a little long but as I intend to use it as an ambush gun that’s not an issue.

Pete Wadeson has alluded to the fact that the reason why some airgunners do not use PCPs is due to having to fill them with air and in some cases I can see why. I soon wised up and binned my idea about getting a manual pump and asked Best Fittings who supplied a 9-litre carbon fibre air tank complete with glycerine-filled gauge, Q/D whip line, carry handle and plastic base. It’s considerably lighter than a steel version which is a bonus, plus Best Fitting specialises in this area and offers some superb products!

Getting the tank filled proved problematic certainly in Colchester. I rang around loads of diving shops and most said no they did not fill for PCP use, I also tried some industrial outlets with similar results. I even tried a local airgun club, left a message but got no reply. I swiftly understood how frustrating this can be. In the end I found two shops one in Bishop’s Stortford and the other in Ipswich that seemed PCP-friendly.

Given where I shoot most is in Suffolk, Galaxsea Divers of Ipswich got the nod and they offered a fast and friendly service and for the grand sum of £4.08 I had my tank filled. They do some PCP filling adaptors and told me they have a number of airgunners coming in for fills and are considering getting related stuff in like pellets, scopes etc.

My first cock up was removing the buddy bottle. Typically I did not read the instructions and thought just fire the gun, leave it shut and unwind the buddy; wrong! As I unscrewed it there was a pop and I’d blown the O-ring seal. So I had to ask Theoben to send me some more. Lesson one get spare seals dummy and read the book!

The proper way is to open the bolt and lock it in its rear position, then unscrew the bottle about 2mm, shoot the gun to expel any air left in the system then fully unwind the tank. Filling was the next bridge and I can see how pressurised air could scare some people.

The BF tank came with a Q/D whip line which is compatible with most PCPs with integral air reservoirs; however the Rapid uses a removable buddy bottle so just remove the hose unit and screw the bottle directly into the side of the filler head. All it needs to be is hand-tight and all threads and seals clean and debris-free. Cleanliness is the name of the game here otherwise you are going to have problems!

Theoben states a maximum charge of 220-bar (3200 psi) is used. I have seen reference to the fact that some guns run better on a slightly lower pressure. We shall see but this time it was to be 220- bar. Just crack the main valve and slowly let the air in. I found that you need to go a tad over as when you shut off the gauge drops a little. Be aware the bottle gets hot too!

So now finally full and with the ability to re-fill and a tin of H&N Sport Barracuda, 13.89-grain pellets it was off to the range for testing and set up. I shot supported off the bench and set my target at 55-yards. Group size blew me away; I have often seen Pete Wadeson refer to – ‘ragged, one-hole groups’,  well he was right as the Rapid was punching sub-1/4”!

From the 220-bar fill average velocity was 920 fps, which generated 27 ft/lbs at the muzzle. My Ballistic FTE programme had .20” cal pellet info so using a 14-grain weight (nearest to 13.89) I built a 100-yard drop chart. Maybe a bit too far - we would see - but at maximum range I was getting 9 ft/lbs of energy, which was probably more than enough to kill a rabbit!

So off on my first hunt, which proved beyond doubt the ability of an FAC-rated air rifle! The location - a field at the back of two houses, at the top end was a paddock with horses in it and to my front a small wood. My keeper put me here saying that the wooded ground rose sharply so giving a safe back stop if shots were kept low (2ft maximum height) no probs there as you don’t see many 2ft rabbits!

I set up on the bonnet of my Landy 55-yards from the face of the woods with a range bag and a set of Swarovski 10x42 EL Range laser binos. After a time rabbits appeared singly from 55 to 60-yards and were drilled with ease. I tried both head and body shots keen to see the effect. In the noggin was clinical but in the engine room the bunnies reacted like they’d been hit with a 22 LR or 17 HMR with that classic meat slap thump as they were hit then bowling over backwards.

I initially forgot to account for wind, as it was only 3-4 mph something you would not bother too much about on a rimfire at these ranges. However that 14-grain pill reacts very differently. A bunny appeared at 68-yards and setting the correct hold over I shot only to miss. I fired twice more and each time it sat there unfazed. By chance my third shot hit a twig and snapped it showing me I was a whacking 3” off target. It also proved how quiet the system is, had that been a 22 sub-sonic it would have bolted as the 40-grain pill whizzed by!

FTE AND KESTREL TO THE RESCUE

Realising the problem I checked my ballistic package and it showed I needed 3-4” of correction at this distance at 3.4mph (average as measured on my Kestrel wind meter). It was an eye opener and after that even if I felt a breath on my face I whipped out the Kestrel and consulted my FTE to gain a firing solution.

I got 12 rabbits that evening and my two best shots were a hold off to the left at 65-yards in a 4.5 mph wind and a beautiful, wind-free at 80-yards using the third ring on the Nikon’s BDC reticule. Both reacted like they’d been hit with a Rimfire. This was serious stuff and not the puff gun I had imagined. There’s no doubt in my mind the Rapid can kill and efficiently too, with none of the over penetration and ricochet potential of a rimfire. I’m sold!