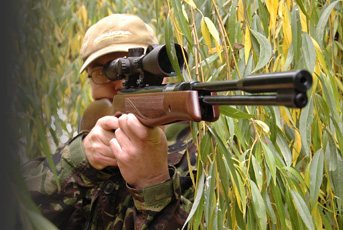 When Weihrauch launch any new product, it is an exciting occurrence. As the largest producer of top class spring powered air rifles, this prestigious German brand occupies something of a unique position in the market place, and as such, we simply have to take notice.

Their comprehensive product line-up includes a hatful of break-barrel designs, many of which have built up loyal followings over the years. Yet it’s their range topping under-lever models that have spearheaded the way.

On test here, is the very latest version of the HW97K model, complete with the brand new thumbhole custom stock.

Appraising the ‘97 is impossible without acknowledgement towards its lineage. One glance at the new brochure from Hull Cartridge, Weihrauch’s long standing official UK importers, says it all, with the entry printed alongside the ‘97’s forerunner…  “It all started with the HW77!”, and indeed it did, and when the ‘77 took Field Target shooting by the scruff of the neck, and most of the opposition with it, back in the 1980’s, the airgun scene was never quite the same thereafter.

What the HW77 brought to the table was direct feed and fixed barrel accuracy, in a reliable, rugged design, (free from dodgy loading taps and the like) that genuinely swept all before it - certainly where competitive performance was concerned.

Unsurprisingly, the ‘77 action went on to become the raw material upon which the custom tuning houses based their ‘specials’; and with the majority of top silverware subsequently falling to Airmasters and Venom tuned rifles, the rest as they say is history. My own Airmasters tuned ‘77 brought many a competition win, and is still as accurate as ever some 24 years down the line - testament indeed to the build quality of the original Weihrauch chassis upon which it is based!

Part of the customization process from those specialist companies (and several others for that matter) included an integral, dedicated silencer/lever catch assembly. Weihrauch inevitably wised up to this, and finally saw fit to introduce a revamped model which largely came ready fitted with the add-ons that had previously been supplied as after-market items.

That revamped model was the HW97K. My test rifle has the same action, which has remained largely unchanged save for a revision of that silencer arrangement, shoe-horned into the new custom furniture. But with several quite bold design features included within the stock specification, this new variant offers real choice as an exciting option in the product line-up.

Let’s nail the specification, first and foremost, for those unfamiliar with this classic piece of German engineering.

As previously stated, this rifle offers a fixed barrel configuration, with an under lever that is hinged at the breech, and is used to cock the conventional spring-powered piston action; complete with that rather sleek sliding breech system. With the ‘97 tipping the scales at over 9lbs in weight, and given it’s full sized dimensions, and significant cocking effort, it really has to be considered a sporting rifle strictly for adults.

Weihrauch’s famous ‘Rekord’ trigger unit sits pretty here, the blade being treated to a gold anodized finish. It still stands as a benchmark for many too, but as these rifles are supplied from the factory with a general setting, some judicious adjustment makes sense. Just don’t attempt to adjust this precision unit unless you are totally familiar with the theory. When correctly set, this unit is extremely good, but setting up triggers is a fine art, so if in any doubt, leave well alone and seek expert assistance, rather than wreck a celebrated piece of engineering. The genuine 2-stage design can offer impressively light and totally crisp release points, so it’s well worth some preparation time.

Weihrauch’s reputation is built upon several factors, such as superb engineering, and an excellent standard of finish. This Thumbhole version of the HW97K is a perfect example of their art, with a smooth lustrous chemical blue applied to all the metalwork, and solid no-nonsense construction and build quality - that really explains why the company leads where others follow.

The ‘97 is supplied in carbine length only (as opposed to the ‘77 which is still available as a carbine or in full length rifle guise. The integral silencer adds front weight to the shortened Weihrauch barrel, whilst the dummy lower barrel tip doubles as the under-lever release catch- easily depressed to allow for the lever to be drawn down and back, compressing the mainspring in the process. Cocking effort is significant, but as always, it’s more a case of technique.

When the rifle is cocked an automatic safety catch pops out (on the left of the compression cylinder) and an anti-beartrap system is activated, locking the piston until the lever is returned. However, at the end of the cocking stroke, once the trigger has engaged, the only safe procedure is to keep a firm grip on the cocking lever with one hand, whilst feeding a pellet directly into the exposed breech. Weihrauch now fully machine away the sides of the loading bay (another mod carried out by the custom houses on early ‘77s), and access to the breech is a non-fiddly affair.

Direct feed is by far the best system on any air rifle, and with this HW97K, finger sensitivity is effectively allowed to call a bad pellet. Too slack, or too tight a fit, and the shot could become a ‘flyer’. This rifle helps to eliminate such irritants, and puts greater control in the hands of the shooter.

T Is For Thumbhole

To reach this point in the review and still have overlooked the new woodwork is a measure of the weighty specification that’s on offer here.  The new thumbhole stock is in a word, impressive. It’s actually beech, treated to a ‘walnut finish’, but the figuring on my test model was very attractive.

Yes of course it’s typically Weihrauch, and that ultra raked pistol grip and overly scalloped thumb-hole will always divide opinion. Yet in use, it feels extremely functional and very comfortable. One key detail should be made clear at this point. The stock is totally ambidextrous, whilst losing nothing in the performance stakes. No mean feat, and one which will please all those south-paws out there who feel short changed from many a manufacturer - either being ignored altogether, or forced to pay a premium for their minority predicament!

The pleasantly angled fore-end is suspiciously similar to the revised TX200 blueprint, (this rifles main rival) yet since that excellent model was itself something of a Weihrauch clone, I don’t think we’ll be seeing lawyers exchange notes just yet!  Weihrauch’s use of stippling (something they excel at) in place of the usual chequering, adds further character to a well thought out design; with the level of grip afforded to the pistol grip and fore-end highly impressive.

My only negative observation is on a purely cosmetic level; that being that the cheek-piece itself would benefit from crisper, more angled definition - rather than the slightly vague profile as seen. Personal taste perhaps, and you simply can’t fault the new woodwork from a handling perspective.

An adjustable rubber butt pad completes the spec list here, set onto a serrated plate, easily adjusted by slackening off the screw at the rear. An excellent feature which can really make all the difference with regards to gun ‘fit’.

The Best Just Got Better

Over the test range the fine balance of this gun became apparent, and with a nice amount of bias towards the muzzle, the HW97K sits well on the target. As previously mentioned, despite the trigger being factory set a little heavier than I would have liked, several brands of pellets still printed excellent groups, with Daystate FT just nudging out Weihrauch’s own F&T brand, with tight 3/8inch clusters the norm.

As a point of interest here, my sample of Weihrauch pellets felt a little too tight in the barrel, whilst some JSB Exacts virtually fell down the barrel, and were discarded for the purposes of the test as a result. With both the JSB’s and the Daystate slugs, also used in the test, both prescribed as 4.52mm, it just goes to demonstrate the vagaries of airgun ammunition/ rifle suitability. Personal experimentation, as always, will pay dividends.

From experience, I can tell you that the action on this under-lever classic will only improve with age, whilst investing in a full tune-up from the likes of Airmasters or V-Mach, will transform an already classic rifle into the thoroughbred it’s waiting to become.

All this performance makes this ‘97 one of the safest bets for the popular sport of Hunter Field Target shooting, and with the new stock adding further versatility to an already impressive package, any prospective competitor will certainly have the edge.

One thing is for sure - this latest incarnation of the market leading HW97K is a winner from the start, and a tasty addition to a stunning product range. In short, there is no better production springer out there!