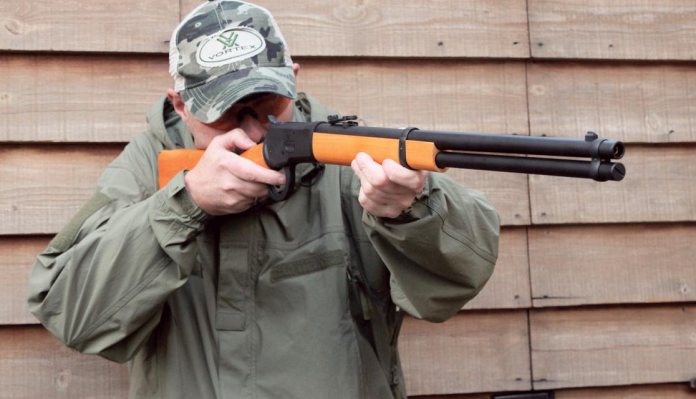 One of the things that I really, truly love about airsoft is the fact that you can get your hands on replicas of countless firearm models. You can then use them in many ways, as you might be a hardcore ‘MilSimmer’ with an up-to-the-minute L85A2, a ‘Nam Grunt’ with a classic M16A1, a ‘Sci-Fi/Horror’ enthusiast with anything you can lay your hands on, or indeed a player with one foot in the WWII re-enactment camp with your M1 Garand or Kar98. I’ve tried most forms of airsoft, but one that I’ve never had the chance to get into is ‘Wild West’.

My friend, Josh, and his great crew at Gunman Airsoft run regular western themed games under the ‘Flying Lead’ banner, and from what I’ve heard, and seen in post-game pictures, they are very, very good. There are some excellent airsoft ‘Western’ revolvers out there from manufacturers like Hartford, Tanaka, and Marushin which have been, and are, superb; manufacturers like KTW and Marushin have built Winchester and Randall rifles and they have traditionally been very expensive, but in many cases didn’t perform very well.

Now, I have been lucky enough to shoot real lever action rifles, most recently a lovely Uberti ‘1873’ chambered in .45 Colt, and they are a part of the Western ‘legend’, so if I was going to put together a ‘cowboy’ airsoft loadout, then a Winchester would be high on my list of priorities, along with a brace of Single Action Army (SAA) revolvers. I have spoken to a number of the guys involved in the ‘Cowboy Airsoft’ scene and almost everyone to date has told me not to bother with any of the existing Winchester models, unless I was going to put some serious money into getting one that worked properly and reliably; so you can imagine the grin that appeared on my face when I visited Fire Support recently and saw a rather nifty looking lever action hanging on the wall.

Upon further investigation, I was told that this was a new, UK-friendly replica from Chinese manufacturer A&K, which rather took me back as they are best known for Masada, M249, and M60 replicas, most of which are as up to date as you would think. To see a classic Western themed rifle from them was rather a shock to say the least. I duly asked if I might have a sample for review and Frank was more than happy to let me take one away with me. Delving into the A&K website when I returned home, I found the ‘1892’ model simply listed as ‘Gas Gun’.

The Winchester 1892 was actually first manufactured after the ‘Golden Age’ of the American frontier, and the true ‘Guns that Won the West’ were the earlier Models 1866 and 1873. That said, the 1892 became an icon of the Western through its use in hundreds of cowboy films and television shows, standing in for the older models. Hollywood movie studios bought up literally hundreds of the 1892 because it was in regular production during the silver screen cowboy heyday but looked sufficiently like Old West Winchesters to substitute for valuable antiques, and because in calibres .44-40 and .38-40 it could fire, together with the Colt Single Action Army ‘Peacemaker’ revolver, the standard blank cartridge. This mirrored the way that real cowboys found it convenient to carry a rifle and a revolver chambered with the same ammunition. John Wayne famously carried 1892s in dozens of his films and owned several personally, some with the distinctive oversized loop lever that is seen filling his hand in True Grit; Steve McQueen was also a fan, famously using his Mare’s Leg in the show Wanted: Dead or Alive. It is believed that some 1,007,608 1892 rifles were made by Winchester, and although the company phased them out in 1945, they are still being made by Rossi, Chiappa Firearms, and by Browning in Japan. In its modern form, using updated materials and production techniques, the Model 1892’s action is strong enough to chamber high-pressure handgun rounds, such as .357 Magnum, .44 Magnum, and .454 Casull.

With this absolute wealth of history and cinematic provenance in hand, I was truly interested to see how the A&K Winchester performed out of the box. A&K offer just two ‘Western’ models in their range thus far, the 1892 which comes with faux-wood plastic furniture and the 1892A which has real wood, albeit Chinese Orange; this wood finish is quite poor and damages easily, but a little sanding down and re-staining will soon have this looking ‘just so’, and to me it’s not a problem. Both rifles are predominantly full metal, and I mean full, in their construction including a rather nice brass buttplate.

The finish on all the metal parts is very, very tidy indeed, a nice matte black throughout, which looks like it will stand up to wear well. In the hands, if you’re used to modern firearm models, the Winchester feels almost diminutive given its slender and elegant profile, but it shoulders well and is easy to move around. There’s next to no fluff about the 1892; there’s a small ring on the left-hand side for securing it into a saddle holster, and sights are simple yet effective, with a blade at the sharp end and a ladder rear sight adjustable for windage and elevation (Mrs Langdon!).

The 1892 has no controls and no safety catch, but once cocked, the hammer can be released forward by easing the trigger, so the rifle can be safely carried when loaded; when you’re ready to fire, it’s just a case of cocking the hammer back with your thumb and pulling the trigger.

The A&K is gas powered and gas is charged into the chamber by removing a small plate on the front of what would be the magazine on the real thing; this is quickly and easily achieved and the small plate (resembling a screw head) is held securely in place by a tiny spring-loaded ball. Just like the real thing the replica 1892 is loaded via a small port on the right hand side, just above the front of the trigger guard; a special loading tool consisting of a tube, plunger, and angled plate is provided with the replica as the BBs actually load in at an angle, which you’d be hard pressed to achieve with a normal speed loader.

With the Winchester loaded up with its full complement of 24 rounds of the new ‘Hardball’ .20g BBs from ARMEX and charged with NUPROL 3.0 gas, it was time to see if the little rifle lived up to my expectations. Through the chrono the rifle delivered a consistent average of 332fps over a string of 10 BBs, which is perfect for all UK sites. I set the hop up, which is situated on top of the barrel and accessed by cocking the rife, and easily adjusted using a small Allen key, which is provided, and went to work on some accuracy testing. At 10m unsupported I was able to group a further 10 BBs within 21mm, and I was easily hitting my ‘sandbag’ at 30 m. The rate of fire is of course governed by how fast you can work the lever action, but this is very smooth in operation; you do need to ensure however that you cycle the action fully, as internally there is a small plate which lifts the next BB into place and if you don’t work the lever completely you’ll be left ‘dry firing’!

I have to say that I find the A&K Winchester 1892 utterly charming, and as you’ll see above it’s no slouch in terms of build quality or performance either. I will go as far as saying that this is a replica I would love to add to my personal collection and as it costs just £179.00, that’s not going to break the bank. Would you use this as a skirmish rifle on a weekend? I’d have to say no, but if you’re thinking of dabbling in Wild West Airsoft then this is a rifle that will let you do just that at a sensible price, and you’ll have a lot of fun doing so.

Now, I think it’s time to strap on the six-shooters, tip the brim of my 10-gallon hat to the Sheriff and ride out into the sunset in search of adventure, with my trusty Winchester by my side!