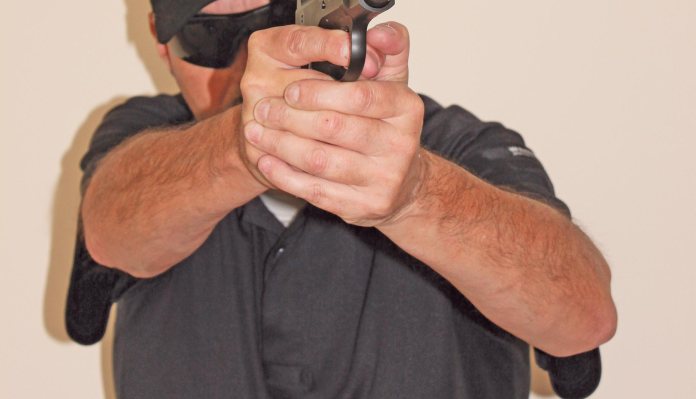 Sometimes I find it hard to believe that my relationship with firearms, both real and replica stretches back some 40 years now. As a lad I was introduced to handguns by my father, learning to shoot with his Walther PPK and Browning Hi-Power in the days when pistols were legal to own. Over the years it has been my privilege to shoot many different models of handgun both at home, and more lately abroad.

Some 10 years ago now my wife and I had the opportunity to live and work in the USA and spent four very happy years in Florida; of course as a shooter this was for me like going to live in paradise, as I could get onto a range just about as often as I liked and the wallet allowed. I shot regularly at Knights Shooting Sports (now Shoot Straight Clearwater, www. shoot-straight.com), meeting new friends and taking the opportunity to attend pistol courses whenever I could, and it was there that I first encountered the CZ75.

The regular instructor was a gentleman named Norm Belson; a 20 year US Army Veteran who went on to serve with Clearwater Police Department for a further 22 years – what this man didn’t know about handguns really wasn’t worth knowing! At the time he swore by his trusted CZ75 describing it as “the best combat handgun ever”. Over time I also came to love it even though by that time it was a design nigh on 40 years old!

History of the CZ75

Ceska zbrojovka a.s (CZ) was established in June 1936 in Czechoslovakia, now the Czech Republic. Throughout WWII and into the Cold War CZ manufactured a solid line of military small arms including the vz58 assault rifle, the distinctive Skorpion vz61 submachine gun, the reliable CZ75 family of pistols, and even now continue to innovate with new models like the Scorpion EVO.

Following WWII, brothers Josef and Frantisek Koucky became two of the most influential design and development engineers at CZ. Interestingly the brothers signed their designs together, using only the surname, making it impossible to determine which one of them developed particular ideas! This changed in 1969 when the recently retired Frantisek Koucky was offered a role in designing a new CZ 9×19mm Parabellum pistol. Unlike his previous job he had complete freedom to design the pistol from the drawing board onwards. The design he developed was in many ways new and innovative. Chambered in 9mm (the issued pistol cartridge for the Czech forces at the time was the Soviet 7.62×25mm Tokarev) the new model was designed specifically for export purposes and in fact was not sold in Czechoslovakia until 1985!

The CZ75 is a recoil-operated, locked breach design taking inspiration from various of the Browning and Colt systems; in fact it used a modification of the Colt swinging link breach lock with the link replaced by a shaped cam under the breech. It also took handgun ergonomics to the next level as, although it resembled the venerable Browning Hi-Power to some degree, the angles were smoother throughout, resulting in an instinctive grip and precise operation. Unlike many other semi-auto pistols, the slide rode inside the frame rails rather than outside; this provided a tight slide-to-frame fit and a very efficient barrel lock-up, both of which contributed to its accuracy.

Officially launched in 1975 production of the handgun actually began in 1976, and since then it has undergone many tweaks and upgrades culminating in the CZ75B (The ‘B’ designation is an indicator that the model is equipped with a firing pin block safety) available today; the 75 B features a steel frame, a black polycoat finish, three dot sights, 16+1 9mm capacity (10+1 in .40 S&W) and, of course, the ergonomics and DA/SA action that have made it, in the words of CZ themselves “the most copied handgun design second only to the 1911.”

One of the things that I really like about airsoft replicas from Action Sport Games (ASG) is that ASG work directly with the real-world manufacturer, and have access to all the design drawings and specifications of the original. It also means that when you receive your replica the trademarks will be present and accurately achieved.

These worldwide exclusive license agreements actually mean that ASG have been authorised by many famous original firearms and accessories manufacturers to replicate their firearms, components and accessories into outstanding realistic 1/1 scale replicas of the highest quality. Luckily for us one of these manufacturers is CZ.

The CZ75 from ASG shows that you’d be hard pressed to distinguish the replica from the real thing! All the dimensions are pretty spot on with the replica coming in at 206.3mm long as opposed to the 206mm of the current 75B; in terms of weight the real thing tips the scales at 1000g and the replica when loaded with its full complement of 24, .20g BBs is pretty darn close at 984.8g.

The ergonomics of the replica also mimic those of the real thing and sits very comfortably in the hand. The angle of the pistol grip (which is slightly longer than the Hi-Power and 1911) is nigh on perfect, and even the checkered plastic grips featured the embossed CZ logo. The controls are all quite similar to those of the Hi-Power and the 1911 as well, so if you own one of those models the 75 will feel pretty instinctive; the magazine release sits to the rear of the elegantly curved trigger guard on the left-hand side, with the safety catch to the rear above. The safety is set only when the pistol has been cocked which means that you can safely carry it in ‘Condition 1’.

The overall finish of the replica is absolutely excellent, with the body and slide being full metal in a rich matt black. The trigger, outer barrel and breech are all finished with a silver stainless effect which makes the whole thing look very attractive. The trademarks, CZ logo and ‘MODEL 75 CAL.9 PARA’ are all very cleanly achieved on the left of the slide and the only real giveaway that this is a replica is a tiny ASG logo and the legend ‘Cal.6mm BB’ discretely placed on the right of the body.

In use the ASG CZ75 is equally flawless. The action is very crisp indeed, the slide easily moved to the rear thanks to some deep serrations on either side of the slide at the rear. When cocked the safety clicks into place firmly and solidly. The pistol comes with a 24 round ‘green gas’ magazine as standard which is swift and easy to load, and this snaps into place with a reassuring clack.

Loaded up with .20g NUPROL BBs and gas, the CZ75 sent BBs downrange with astonishing accuracy, giving excellent groupings at 10 metres; the sights are a simple front blade/rear notch affair although you can upgrade these to dot sights should you wish. The pistol does have an adjustable hop-up which is accessed by removing the slide, and this is very well explained in the full colour instruction manual supplied with the pistol.

On the .20g ammo it chrono’d consistently around the 300fps mark. ASG do offer a CO2 magazine as an accessory and this does raise the power a little; I see this as a positive for a different reason though as the CO2 will give greater consistency in the colder months of the year.

Overall this is a really superb airsoft pistol and is worthy of a place in anyone’s armoury. It looks and feels great, shoots consistently and extremely accurately, and cycles perfectly on both green gas and CO2. ASG pistols are stocked by most good airsoft retailers, and the CZ75 sells iro £130.00 which is excellent value for money considering the quality and the fact that it is fully licenced. If you’re in the market for a new pistol then I would thoroughly recommend that you give the CZ75 Gas Blowback from ASG your full attention. For further information visit www. actionsportgames.com and for UK stockists visit www.highlandoutdoors.co.uk