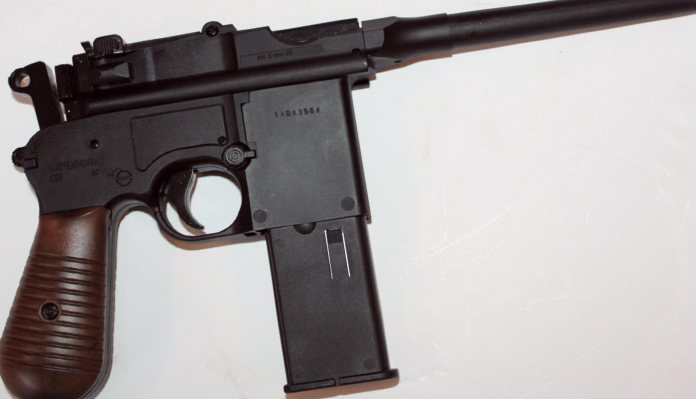 Even though I have my skirmish replicas I thoroughly enjoy getting my hands on something that is just that little bit different, especially historical collectables, so when I received the Mauser C96 from Armex it certainly brought a smile to my face. This is a replica that is instantly recognisable and one that links Winston Churchill to Han Solo! It’s the pistol that Winston used at the Battle of Omdurman in 1898 – as featured in the film Young Winston (1972) – as well as the base for the blaster used by Harrison Ford in Star Wars (1977). This replica ticks all the right boxes for me, in every respect.

Introduced in 1896, the Mauser soon earned the nickname ‘Broomhandle’ due to the characteristic and unusual shape of the pistol grip, and it’s certainly a unique firearm. Developed by three brothers, Fidel, Joseph, and Freidrich Feederle, the C96 was patented in 1895 in the name of Peter Paul Mauser, and was produced at the Mauser factory in Oberndorf am Necker. There were numerous military, police, and civilian variants both for use in Germany and for export worldwide. The C96 proved popular with all users and production continued through until 1937, with some one million pistols being shipped from the factory.
Originally developed with the 7.65mm Borchardt round, true production of the C96 started in October 1896 when the design was finalised utilising the 7.63mm Mauser cartridge; interestingly this high-velocity cartridge was actually the most powerful to be produced until the introduction of the .357 Magnum in the 1930s!

Six, 10, and 20 round magazines were available, and the Mauser came with a wooden holster that could be used as a stock by attaching it to the pistol grip. With the larger capacity internally held magazines this essentially turned the pistol into a semi-automatic carbine, and with its long, nearly 6-inch barrel and adjustable sights the C96 was accurate, and really quite advanced for its day.

Production of the C96 continued for longer in China where the ‘Shanxi’ and ‘Hanyang’ copies were manufactured for both the warlord armies and then for the People’s Liberation Army. Some of these undoubtedly found their way into the hands of rebel armies in South East Asia and there are pictures of the pistol in use by both the Viet Minh and Viet Cong during the Vietnam War. The C96 was also produced up until 1951 from spare parts as the Astra 900 in Spain. The C96 has a long and distinguished history, and it’s certainly a replica that deserves a place in any historical airsoft collection.

The C96 Mauser offered in the Umarex Legends range is a real thing of beauty. Even though it is largely of plastic construction much of the internal setup makes use of metal parts; there’s a metal bolt, trigger, hammer, safety, rear sight, and inner barrel. The plastic really isn’t too bad, as it’s very sturdy and has a lovely finish to it, and some neat little trademarks give it a quality feel. With a relatively high power of 388fps using a .20g BB this is not really a skirmish gun, but one that you can have a lot of fun with!

Sights are relatively simple with a very pronounced blade at the front and a rear sight which is fully adjustable for both windage and elevation. The pistol grip, which is again plastic wood, feels really good in the hand and allows for a solid grip, and there’s even a lanyard ring where it should be. Controls are again quite straightforward, with the safety catch placed on top beside the hammer, and the magazine release situated just above the trigger guard on the right-hand side of the pistol body.

The magazine itself is of metal construction, with the plastic cover on the lower half. This cover slides downwards to allow a 12g CO2 capsule to be loaded into the magazine body, and neatly hides the piercing screw when everything is reassembled. The magazine itself replicates the longer, 20 round variant of the real thing, although it actually only holds 13 6mm BBs.

With the CO2 capsule and the BBs loaded it’s then simply a matter of placing the safety catch into the FIRE position, racking back the action and pulling the reasonably light trigger; the C96 sends BBs cracking downrange in a very businesslike fashion, and at 10 metres the accuracy is very good indeed.

All in all the Mauser is a wonderful replica, and I certainly enjoyed having the opportunity to shoot a pistol with such a rich heritage. It’s not the easiest airsoft pistol to get hold of, but Armex do still have some stock so it’s worth checking their website to find stockists. This is a super pistol to own and shoot, and I’d really recommend that you give one a try!