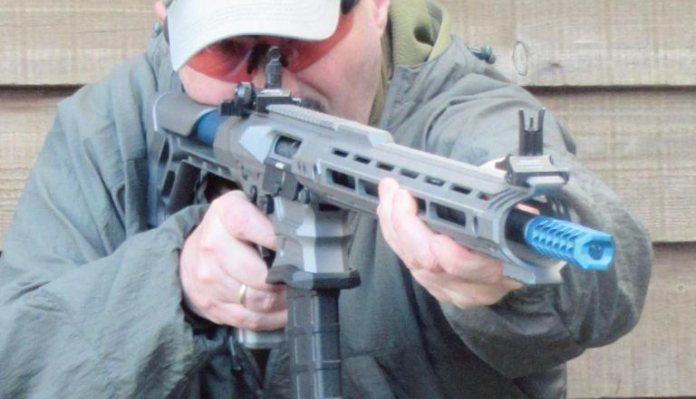 I am going to come out and say that I am absolutely, 100% NOT any kind of competition, apart from perhaps when it’s a quid in the hat at my local club! That said I firmly believe that when it comes to airsoft the competition side of things has changed dramatically in the last few years, and with the recent Airsoft Surgeon event alongside the BSS in Birmingham I also believe that this shows a fabulous side of airsoft to the shooting community as a whole!

Whilst it is true that airsoft continues to be a game played by and large by folk running around in the woods at the weekend in their favourite insert camo of choice shooting at one another with BBs, the Practical Pistol, and indeed Three Gun side of 6mm-slinging is thriving, and to my mind it is an incredibly positive thing!

And, of course, this competitive focus is driving manufacturers in new and exciting directions, and whilst I do not intend to compete myself, those new designs and new directions that I’m seeing in relation to electric airsoft rifles are really exciting. Competitive designs can differ massively from stock ones, with additional functionality and new ergonomics in place specifically to aid rapid target to target transitions and ease of operation. This in itself is genuinely exciting, but when some of these race concepts are transferred to our everyday rifles and carbines it can have a profound effect on the basest of models.

And one such rifle which I first saw as a concept at IWA a couple of years back is a collaboration between Taiwanese airsoft giant G&G Armament and a very specific company called Cobalt Kinetics in the USA; the result is an airsoft rifle that would be equally at home in a competition or on the skirmish field!

Now Cobalt Kinetics are one of those quiet gunmakers that have made stunning rifles and carbines based on the AR platform, but really drive things forward in a thoroughly modern and purposeful way! They believe that form should always follow function… except when that mantra overtly opposes art! At Cobalt Kinetics, as they say in their own words “sometimes we let form determine and define function”.

Every part they make is inspected at five stages during manufacture and assembly. Every receiver set and stock and handguard is selected from hundreds of other parts to fit perfectly. They enforce a zero-tolerance policy on visible surface defects and gaps between components; in most instances, they sand, blend and mate receiver sets before they’re put together, inspecting every bolt group to ensure smooth, flawless, and reliable operation, and they scrutinise every barrel to maintain superb accuracy.

Again, I’ll quote directly from Cobalt Kinetics: “frustration has been the soul of invention. Our blue-sky thinkers imagined design, features, and capability that did not… and could not exist. So, we had to invent the technology to support our imaginations”.

But what do they mean by this? The bottom line is that they have developed completely new ways to overcome issues we didn’t even realise existed! For instance, their innovative approach to solving recoil and to perfect the AR operating system has lead them to create a totally unique muzzle brake and one of the smoothest and most versatile buffer system on the market; their solutions represent a peak level of development of these rifle systems. Their rifles’ unique geometry and control features exploit a shooter’s natural tendencies of motion and hand-eye coordination to create a rifle that is purely instinctive to operate; a rifle that can be loaded and reloaded and can make target acquisition and transition faster than any other AR-patterned sporting rifle.

Here in my CARS

When you’re talking about something that is unique, Cobalt Kinetics have developed their Cobalt Advantage Reload System (CARS). Their CARS Rifle automatically drops an empty magazine and loads the chamber once an ammunition supply is present. When using a CARS equipped rifle, the user is only required to pull the trigger, and introduce a fresh magazine as ammunition becomes exhausted. More time and attention can be spent on target acquisition and engagement, allowing for faster and more accurate shooting. The CARS retains the standard operation of the AR-15 platform; the bolt catch and the magazine release are still present and operational.

Again, here I quote direct: “When using a CARS rifle, a shooter’s speed and performance are maximized while limitations or deficiencies in handling skills are minimised. The CARS takes care of the mundane operations of the rifle, allowing the shooter to focus more on dynamic movement, target acquisition, and engagement. Even the most skilled shooter, now only concerned with the trigger and the target, will achieve a new level of performance”.

Cobalt Kinetics rifles are definitely unorthodox and very unique in their own special way, and thankfully for the airsofter G&G have worked with the real steel manufacturer to bring us something rather special!

When it comes to the Cobalt Kinetics Licensed BAMF TEAM AR15 G&G have not only successfully replicated the look and feel of these expertly crafted works of art, but they have also managed to replicate the CARS system in an AEG where the magazine automatically drops free upon feeding the final BB. There is also a built in-cutoff / mag safety that disables dry-firing of the rifle until a fresh magazine is inserted to help simulate a rifle running empty. At the heart of the rifle is G&G’s venerable G2 gearbox which offers exceptional out of the box performance!

In terms of the package that’s on offer what you will get with this stunning AEG is precision CNC machined Upper and Lower receivers with fully licensed Cobalt Kinetics deep engraved trademarks, a one piece lower receiver, buffer tube, and stock system, precision CNC machined free float M-LOK handguard, and a beautifully achieved replica of the Cobalt Kinetics Pro Muzzle Brake. Internally there’s that G&G G2 Gearbox with MOSFET and a microswitch trigger so everything is nice and solid both in and out!

The rifle is finished in a colour-matched and uniform grey with blue accents, just like the real thing, and in the hands it feels rock-solid, other than a slight wobble in the rail which was easily addressed by tightening the hex screws holding it in place. The CARS system (or ADAM – Auto drop Advanced Magazine as G&G call it) 90 BB magazine does automatically drop free upon feeding the last BB and a builtin mag cut off switch/safety disengages the gearbox from dry firing until a fresh magazine is inserted. This is fabulous for a competitive setting (although you will need to buy additional CARS magazines), but if you wish to skirmish with the BAMF then the CARS system can be disabled, and the rifle can be used with standard AEG magazines (these will not auto eject).

With all this clever stuff worked out, I fitted an 11.1V LiPo battery and the 90 BB proprietary MidCap loaded up it was time to chrono the beast; the BAMF with its long 400mm inner barrel was getting a consistent 0.94-Joule/319fps on .20g BBs which is absolutely perfect for virtually every site in the UK. In terms of accuracy and range the BAMF is absolutely spot-on too; switching up to my usual .25 BBs and re-setting the rotary hop I was easily reaching out to the extent of my 30m range, and the BBs were disappearing nicely into the berm suggesting that they could head out a good deal further! At that range, just using the simple iron sights that come as standard I was easily able to hit a dinner-plate size target over and again, so all was good.

I am so pleased that G&G have realised this superb race rifle so well as over the years that I’ve come to know them, the team at G&G have just gone from strength to strength and in many ways I now have a really good reason to own one of their AEGs! I do like the BAMF a lot, and with all the major innovation on show it’s easy to overlook some simple features like the short-throw, 45-degree ambidextrous fire selector and the ultra-wide flared magwell which helps with easier mag insertion for even faster reloads; it’s the little things that add up, and as far as I can see G&G have got all the little things right with the Cobalt Kinetics BAMF TEAM AR15 BAMF Team! Thanks to G&G distributor Nuprol (nuprol.com) for arranging the review model for me and please do check out guay2.com for regular updates on their superb and ever expanding range!