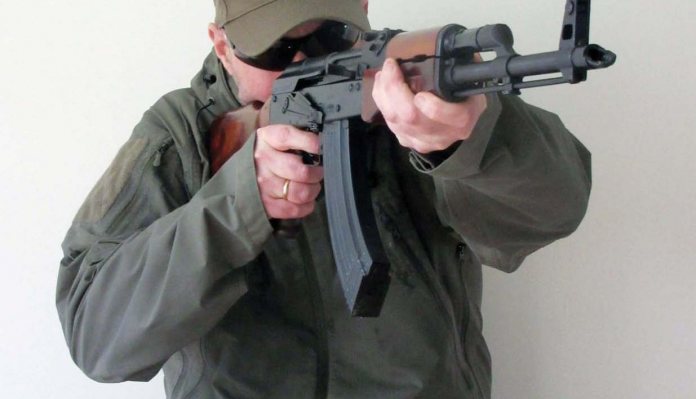 I think it must be fairly obvious to any regular reader that with all the airsoft replicas out there I am most firmly in the ‘Kalashnikov Kamp’! Whether you want a great AEG for the occasional skirmish day, or something that is going to carry you through the most gruelling of MilSim events, then the sheer number of absolutely top-notch AK replicas means that you can find a model that is going to be a perfect companion for you.

Whether you veer towards the ‘classic’, made of metal and good, ‘old skool’ wood, or you want the very latest railed and tricked-up ‘FSB-alike’, then an AK RIF not only fits the bill, but gives you something just a little different from the multitude of ‘M4s’ that we usually see on a skirmish day. Just like the M4’s though, if you buy into an AK you will undoubtedly want another… and possibly even another… AKs fall into two camps ultimately; the older 7.62x39mm M43 models, like the original AK47, AKM, and AKMS, or the more up to date 5.45x39mm models, which started with the AK74. To date, there is no airsoft version of the current issue AK12, which encompasses both cartridges, but I am absolutely certain it’s just a matter of time before someone creates this variant. Suffice to say that amongst the manufacturers you can pick up a fine replica of just about any AK variant you can imagine!

I reported not long ago that NUPROL would be taking on the distribution of the E&L Airsoft brand in the UK in an exclusive agreement, and this has gone very well both for them, and for us as airsofters; in fact, I now own an E&L 74SU ‘tactical’ model myself and I’m chuffed to bits with both its build quality and performance. I’ve continued to follow the E&L online user group and the brand certainly has a very committed following, and the general consensus has been that they are superbly well-made airsoft guns, with great performance out of the box; I can’t disagree here one bit.

To recap, E&L are a Chinese company that have quite quietly been making inroads to the UK market with their fabulous looking AK variants. Although they are well known for their real firearms, namely the Type 56, they don’t take parts from real AKs and convert them to airsoft parts, which of course could be massively legally problematical in the UK, but instead they have modified their plant so the parts they make are only made for airsoft guns and could have no real world application. What they do differently is to make their airsoft guns up to real firearm standards, using real wood and steel, which makes them look and feel incredibly realistic!

Having now had a longer-term experience with the little SU, my greedy eyes have travelled to the rest of the E&L range. I own a classic AKM GBBR, which I love to bits, and which runs like an absolute train in all weathers (unlike the trains!), but it’s pretty much a semi-auto only beast, given the operating system, and although it has superb range and is very accurate, when I go to a skirmish day, where everyone is running HiCap magazines on ‘full chat’, I do feel a tad outgunned. Suffice to say that I’ve been looking for an electric AKM that lives up to the feel and performance of my gasser – enter the E&L AKM Gen II Platinum!

In the real world, though, the AKM (‘Avtomat Kalashnikova Modernizirovanniy’ or ‘Kalashnikov modernised automatic rifle’) was the main service rifle in use with the Russian forces for many years; introduced with the Soviet Army in 1959, it was officially replaced in Soviet frontline service by the AK74 in the late 1970s, but remains in use worldwide.

Compared to the AK47, the AKM featured detail improvements and enhancements that optimised the rifle for mass production; some parts and assemblies were conceived using simplified manufacturing methods.

Notably, the AK47’s milled steel receiver was replaced by a U-shaped steel stamping. As a result of these modifications, the AKM’s weight was reduced, the accuracy during automatic fire was increased and several reliability issues were addressed. The AK47’s chrome-lined barrel was retained, a common feature of Soviet weapons, which helps to resist wear and corrosion, particularly under harsh field conditions and the near-universal Eastern Bloc use of corrosively primed ammunition.

The AKM’s receiver, compared to the AK47, is stamped from a smooth 1.0mm (0.04 in) sheet of steel. To the U-shaped stamped sheet metal receiver housing, a rear stock trunnion and forward barrel trunnion are fastened using rivets. The receiver housing also features a rigid tubular cross-section support that adds structural strength. Guide rails that assist the bolt carrier’s movement, which also incorporates the ejector, are installed inside the receiver through spot welding. As a weight-saving measure, the stamped receiver cover is of thinner gauge metal than that of the AK47. Looks as real as it could!

When the delivery of the latest E&L arrived at the office I was happily surprised at how heavy it seemed, clocking in at nearly 3.5kg/7.7lbs; the real AKM weighs 3.1kg/6.83lbs, but of course the airsoft version is carrying that slight additional weight due to the internals. The other reason for this weight is because the E&L replica is 100% full steel and real wood; not only do E&L have ‘real steel’ plant for the metalwork but they also have a complete woodworking shop, where the wood parts are scrupulously finished to the highest standard by a carpenter’s hand. The wood parts are first boiled in oil to dehydrate them, and then subjected to seven different processes, before final staining and a hand polish; I’m going to say it, but the wood parts are probably better finished than you’d find on a real AK!

Not only are the E&Ls beautifully finished externally, but inside things are equally precise, but this is where the latest ‘Gen II Platinum’ version takes things to a different level! If you look at a ‘Platinum’ E&L AK, what you’ll find is CNC steel gears and 9mm bearings, a one-piece CNC steel cylinder, a super wear-resistant POM piston with silent piston head, super tensile piston and tappet plate, and a hightorque motor; all the wiring throughout is high quality, low resistance silver cord. Basically, everything just oozes quality!

This AKM feels like it’s literally just come out of the Tula factory, and it arrives very lightly oiled, so you even get that ‘factory smell’; E&L go as far as supplying a green plastic oil bottle as part of the deal, which indicates to me that the externals will need to be kept maintained to avoid rusting. Unlike many of the ‘modern’ models that E&L make, the AKM comes without a side optics rail, but the slightly oversized, faux- ‘Bakelite’ pistol grip and superlative wood furniture totally make up for that!

As I already own an E&L, I had no doubt that out-of-the-box performance would be right up there, and I wasn’t disappointed when I got to the range! Using .20g RZR BBs, the AKM delivered a massively consistent chrono reading of 1.1-Joule/345fps, which is absolutely perfect, and spot-on legally for the UK; the AKM even arrived with a certificate of compliance from the factory, and that under the top cover was a sticker confirming that it was fitted with an M100 spring! NUPROL and E&L have worked tirelessly together, to produce AEG’s that are UK/EU compliant, making sure they are CE approved and their models are lower powered than standard, specifically for the UK/EU market and, boy, does this pay off.

In my experience, airsoft AK’s have always been superbly accurate, and it’s one of the reasons why I love them so much; my gasser is good out to about 80m+, so that’s a hard act to beat! With the 120BB steel (again!) mid-cap magazine topped off, it was time to set the hop, and the ‘slide’ adjuster is easily accessed by simply pulling back the charging handle. Like all AKs, the E&L has the lever fire selector with up being safe, mid-point being full auto, and fully down being semi; with semi engaged, the AKM sent BBs to target at 30m with a perfectly flat trajectory, indicating to me that it has the ‘legs’ to clock up a far greater engagement distance. Full auto just increased the number of BBs going downrange without eroding accuracy, which is of course exactly what I was looking for in an AEG model.

The AKM ‘Platinum’ is therefore one hell of a performer; okay, I am biased because I love my existing AKM so much as a model, but even without the ‘real operating system’ of the GBB, this electric version is very, very pleasing indeed. The externals are absolutely perfect (read stunning!), the internals are the very best they can be, and the performance is right up there with the best of them.

I usually finish off any airsoft AK review with the question “would this replace my gasser?” and I have to say that in the case of the AKM ‘Platinum’ it’s a very close call! NUPROL have been working hard with E&L in the background and have managed to reduce the price of the E&L AEG range at source. The first shipment of lower priced rifles has now come into the UK and the AEGs can now be purchased at an even better price than ever! With this in mind, I can certainly see one of these excellent AKMs joining the ‘OPFOR Armoury’ in due course, and with that said, I can only recommend it to you too!

My thanks got to www.nuprol. com for the loan of the test sample, and once they get the distribution rolling expect to see E&L Airsoft models in all good airsoft retailers!