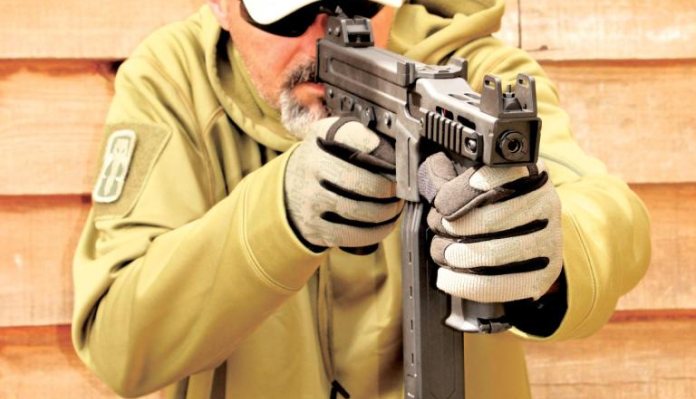 I’m always on the lookout for unusual airsoft replicas and although I like to support and buy from UK retailers, sometimes you need to look just a little further afield. There are perils aplenty should you decide to try and buy something from outside the EU, even if you are registered on the UKARA database as a player, and what looks like a bargain can often end up being less so if you get clobbered for tax and import duty.

Within the EU though things are a little easier, although you will still need to satisfy the authorities that you have a valid legal defence for importing a realistic imitation firearm (RIF) into the UK; once that is in place though there are numerous excellent retailers that you can deal with and one of my favourites is Gunfire in Poland.

Gunfire is a well-established airsoft business and most of the guys there are players themselves so they know what they’re looking for. In their own words: “We’re a group of airsoft enthusiasts who, a few years ago, when hardly anyone has heard of something like airsoft, decided to popularise the hobby in Poland. The beginnings were hard as ever (as) most people thought airsoft to be the same thing as paintball. We, however, pushed forward boldly, continually expanding our product range.”

You can certainly say that they have lived up to their aim, as their sales website is constantly being updated with new models and brands, and the fact that they have been voted ‘Best Airsoft Retailer for Europe’ five times in a row in the popularairsoft.com Players Choice Awards certainly gives them a great deal of credibility, and having dealt with them a few times myself now, I can only attest to their friendliness and professionalism. They always seem to have something new to look at and if you’re interested in Eastern European firearms replicas then you’re going to love their website!

So it was that when I was doing my regular monthly trawl of their new models a couple of months back I came across a particularly interesting sub-machine gun; some of you may have seen the classic Luc Besson movie Leon: The Professional starring Jean Reno and in a couple of scenes a unique SMG is shown, the Spectre M4 (Okay, I’ll admit it, I’m a gun nerd!).

With the threat of home-grown terrorism escalating during the 1970s, many European countries sought out small, easily carried submachine guns for their police and militaries, and the late 70s and early 80s saw some unique personal defence weapons or PDWs come into being such as the H&K MP5K, the Beretta Modello 12, the Jatimatic, and the Spectre M4. The Spectre originated from the Società Italiana Tecnologie Speciali S.p.A. (SITES) plant in Italy. Designed in 1980 by Roberto Teppa and Claudio Gritti production ran in Turin from 1984 until 1997 with the closure of SITES, but production continued in very limited numbers by Greco Sport S.A., a company set up by Gritti, until 2001.

The Spectre was an extremely light and compact weapon weighing in at just 2.9kg (6.63lbs); models with top-folding skeleton stocks were produced, but more commonly than not these were dispensed with giving an overall length of 580mm (22.80in). It was designed explicitly for instant firepower in close combat at short ranges, and the removable forward handgrip helped to give some additional control; the Spectre was available in 9x19mm Parabellum, 9x21mm IMI, .40 S&W and even .45 ACP and the latter must have been a real handful!

One unusual feature of the Spectre was the double-action trigger with decocker; this innovative system allowed the user to safely carry a round in the chamber and fire immediately as the double-action trigger eliminated the need for cocking prior to shooting, which could mean the difference between life and death in a hairy situation. The Spectre also came with a fabulously designed 50 round, four column Casket Magazine which gave a serious amount of firepower, although four column 30 round and traditional two column magazines could also be used, increasing concealability.

Although the Spectre had a relatively short production life it was a well-respected weapon, and in the hands of users like the Swiss Special Forces proved to be devastating. Models were shipped to the USA but this led to its ultimate demise in the main due to the US Federal Assault Weapons Ban that prohibited the import and sale of them on the American market.

The Force Core (FC) SMG, although not called a Spectre by them, is undoubtedly just that; it’s very, very distinctive and nicely replicated. The real Spectre was mainly made of polymer with a stamped steel receiver so the fact that the replica is made entirely from reinforced polymer does it no disservice. The polymer of the FC is extremely sturdy and there are no creaks in evidence, and its matt colour is very appealing. All the parts are well-fitted and prevent any looseness in the overall construction. Metal parts include a side-mounting RIS rail on the front right, iron sights and a singlepoint sling swivel.

Internally it is quite interesting as well; its tiny size suggests that the body conceals an AEP type gearbox, but nothing could be further from the truth. The FC SMG is powered by a full-sized and cleverly installed VIII 7mm bearing gearbox, a model known for its reliability, easy tuning, and upgrade options; in fact all of the internals are nicely reinforced throughout. The battery is located inside the foregrip; you get an old style Ni-MH 8.4v battery and wall charger in the box, but you’d be just as well to ditch the latter. The foregrip is slightly larger than the real thing so you can get a decent LiPo in there without too much bother.

Access to the hop-up adjustment wheel is pretty standard by pulling back the cocking handle on the top of the action to reveal it in the ejection port, but you will need a friend with tiny weeny fingers or a flat-head screwdriver to adjust it as the access is very, very restricted; once set though the hop stays firmly in place, which is a big plus. Other controls are relatively straightforward with a half-moon safety above the trigger on the right-hand side and a two position fire selector on the left rear above the pistol grip. The magazine release button is located inside the trigger guard, which means you can just use your trigger finger to release an empty. The side-mounted 22mm RIS rail can be equipped with accessories such as a tactical flashlight or a laser.

With everything set up, an 11.1 LiPo squeezed into the foregrip, and the unusual Casket Magazine filled with 50 .20g NUPROL BBs, it was time to see what diminutive SMG was capable of… and it certainly didn’t disappoint. On semi-auto, BBs flew nicely downrange at a very respectable and sitefriendly 295fps. Accuracy was unexpectedly good, but range was not brilliant given the incredibly short inner barrel; this is a replica ideal for CQB where engagement distances are short range, and out to 20 metres it was absolutely fine, so even in dense woodland this is going to be a winner. Switching up to full-auto this is a right wee beastie, and you’re going to burn through mags fast; thank goodness everything inside is reinforced, as the FC really does go like a jack-hammer!

All in all this little FC SMG is a bit of a gem – it’s very comfortable and instinctive to use, and given its size, easy to transport; it really is so handy that it is only slightly more difficult to use than a pistol and it offers much greater firepower. Spare magazines for it do seem to be a bit of an issue at the moment, but as the FC seems to originate with AY in China, and also seems to have been re-branded by ECHO1 in the USA, this should not be so much of a problem in the long term.

The Spectre really is a whole lot of fun, and given the exchange rate at the present between the pound and the euro you can pick one up for under £100.00! This seems an awful lot of AEG for the money, and if you’re a new CQB player on a budget then it’s a model you should most definitely have a look at!

For more information on the Force Core SMG and numerous other fabulous replicas please do pay a visit to http://gunfire.pl.