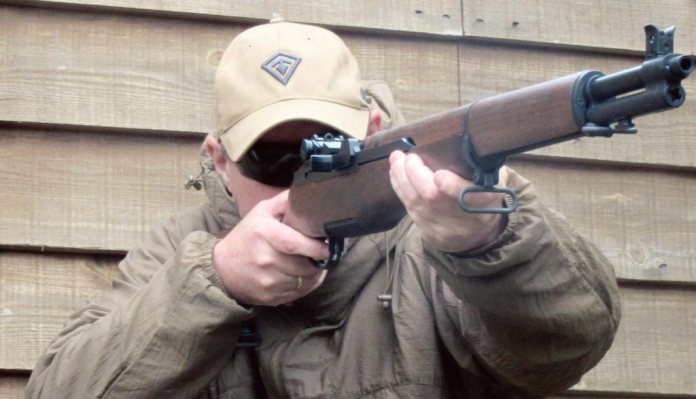 Airsoft isn’t all about shiny modern ARs and workmanlike railed AKs as there are also models that both the historical re-enactor and collector of vintage firearm models can enjoy, and this month Bill Thomas delves into the history of the first issued semi-auto military rifle in the form of the 6mm ICS M1 Garand AEG.

If you are looking on as an outsider to the wonderfully diverse world of airsoft then it must appear that the sport is dominated by the “AR” platform, and to some degree I’d have to (somewhat sadly) admit that there are probably more variants of the modern American rifle out there than anything else!

Over recent years though I’ve watched an upswing in the use of other platforms, particularly that of Comrade Kaslashnikov, in the game, and if you take time to look closely at what is actually available in 6mm replica form there are some absolute gems; for the collector of firearms, albeit in 6mm form like me, there are actually very few military models that do, or have existed in airsoft guise.

Like many “flavours of airsoft” historical periods seem to come and go, and come again in a never-ending cycle, quite often driven these days by a movie, TV series, or video game launch. I’ve seen replicas in airsoft form ranging from pirate, through Napoleonic and cowboy, to WWI, WWII, and the Vietnam War, and you can bet your bottom dollar that if a firearm has existed there’s an airsoft engineer somewhere that has had a crack at building it.

As I still have a toe in the Vietnam Living History world I’m quite regularly asked by re-enactor friends about airsoft replicas from that era, and I’m pleased to say there are some extremely fine examples like the MX177, M16A1, and even a rather splendid Stoner LMG; if asked by someone from the WWII world I’d have to say that this is also true for that period, but to date there’s been one model I’ve been unable to get my hands on due to the fact it’s usually sold out!

Although there are many manufacturers that make Colt M1911A1s Thompson SMGs for the WWII US airsofter or re-enactor, the M1 carbine and the M1 Garand are still both all but impossible to find in electric form; I own a couple of very nice gas M1 carbines, but one is in 8mm form, whilst the other is 6mm but too powerful for most airsoft games in the UK, and I hope that one day someone will address this and create an electric version. To date I have never owned an M1 Garand for the same reason, but thankfully Taiwanese airsoft manufacturers now create a super version of this for all players and collectors to enjoy!

At the back end of the 19th Century the Maxim Gun was creating quite a stir amongst military users around the world, and firearms designers scratched their collective heads on how to apply the auto-loading principle to rifles and pistols. Because of the low power of its small bullet, the pistol was relatively easy, and semi-automatic handguns began to appear quire quickly, but applying Maxim’s principle to a military rifle was much more difficult due to the the power of the cartridge.

The use of the machine gun, and in the latter parts of WWI the sub-machine gun, taught the devastating nature of heavy infantry firepower and, in 1918, US Ordnance began to search for an auto-loading infantry rifle. Over the next 10 years, many inventors submitted designs for testing, but none proved acceptable. If they could stand up to the punishment, they were too heavy, and if they were light enough to be carried easily (a relative term for the “PBI” who had to carry it!), they were necessarily of small calibre.

However, one of the more promising designs was submitted by a young, Canadianborn inventor named John Cantius Garand, who was quickly employed by Springfield Armory in Massachusetts to develop his rifle further. After many stop/starts with his original design, Garand’s improved rifle tapped off the propellant gases of the fired bullet and used it to cycle the rifle. This design eventually beat out all the competition and was adopted as the standard U.S. infantry rifle in 1936.

Mass production of the M1 Garand began at Springfield Armory in 1937, and the first rifles were delivered to the Army in 1938, and in 1940, a second line was opened by the Winchester Repeating Arms Company who were contracted to manufacture the rifle; now fully on a “war footing” Both Springfield and Winchester operated around the clock, producing more than 4,000,000 M1 rifles by the end of the war in 1945!

The United States was the only country to equip its troops with an auto-loading rifle as the standard infantry weapon of WWII, and it gave American troops a tremendous advantage in firepower, leading General George Patton to call the M1 Garand: “The greatest battle implement ever devised.”

But this was not the end of the story at all. Following WWII many M1 Garand rifles were mothballed and put into storage, but when North Korea attacked South Korea in 1950, M1 rifle production was resumed. Although the primary source remained Springfield Armory, two new manufacturers were contracted, International Harvester Corporation and Harrington & Richardson Arms, and it is estimated a further 1,500,000 new M1s were produced in the between 1952 and 1957.

Of course, in the early 1950s, US Ordnance had already begun the development of a new infantry rifle, one that would have a larger capacity magazine and selective fire capability; after much trial and error and no little controversy an updated M1 was adopted in 1957 as the M14 Rifle. The Garand is still used by drill teams and military honour guards to this day though, and it is also widely used by civilians for hunting, target shooting, and has become a prized military collectible, so much so that under a Memorandum of Understanding (MOU) between the U.S. Army and the Civilian Marksmanship Program, M1 Garand sales are now regulated.

Now I’m extremely lucky as during my time living in the USA I actually had chance to shoot a real Garand on the range a couple of times, and let me tell you that this big old .30-06 is actually a joy to shoot, and the frankly the rifle was way ahead of its time. Unlike modern rifles it doesn’t have a detachable box magazine but loads instead with eight round clips. These are inserted into the open action from the top and retained inside the rifle until the last round is fired, at which point the clip ejects with the final fired cartridge case with the muchcommented on “‘ping”, a sound which if I’m pushed I would say would go largely unnoticed in the heat of battle although others would beg to differ I’m sure.

Now while you don’t get the “ping” with the ICS airsoft replica of the M1 Garand, I’m going to tell you that this is one of the few things that isn’t there, as this is a truly stunning replica!

I’m lucky that I get to shoot probably in the region of 60 or so airsoft replicas on the range each and every year, and that’s before I count the models I get to try at demo days and shows, and to my mind the ICS Garand is a standout model, as it’s truly a visual work of art. The linseed-finished woodwork is absolutely lovely, feeling almost “sticky” as new; this rifle looks just like it’s come direct from the Springfield Armory!

At 1102mm long and weighing in a 3600g this is by no means a small rifle, but it still feels well-balanced in airsoft form, and actually is an AEG you could happily carry all day in game. The metalwork is also beautifully finished, and details, there are many. Internally you get a gearbox with 8mm bushings for reliability and durability, along with steel gears, an uprated MIM set, a nylon-fibre piston, and a one-piece cylinder head, all driven along by a top-end ICS Turbo 3000 motor. You also get as standard a MOSFET to eliminate high switch temperatures, a real bonus as the Garand is semi-auto only!

And talking of which, how does this all translate to the range? Using .20g BBs the Garand gave a mean chronograph reading of 1.37-Joule/385fps which was totally consistent and perfectly site friendly if your site of choice makes use of a “semi-only DMR” rule. Setting the trigger safety to fire will send BBs downrange with an extremely satisfying crack, and the long 537mm inner barrel really comes into its stride, and the Garand is quite astonishingly accurate, hitting sandbag targets easily at 30m at the extent of the range. My view is that with a .28g BB this lovely retro-rifle could really have some legs!

Overall the ICS M1 Garand is a truly stunning replica, and I can really see it acting as your main AEG if you want something for a living history impression that will double-date at your local Sunday Skirmish! For the quality of materials, construction and performance I do not view this as an expensive replica as you can have one for around £425 with a pair of unique 42BB mags included, and for this price you are getting a slice of firearms history and a great deal for you money!

My thanks as always go to www. fire-support.co.uk for the loan of the test sample; please do check them out for any, and all of your ICS Airsoft needs and much, much more!