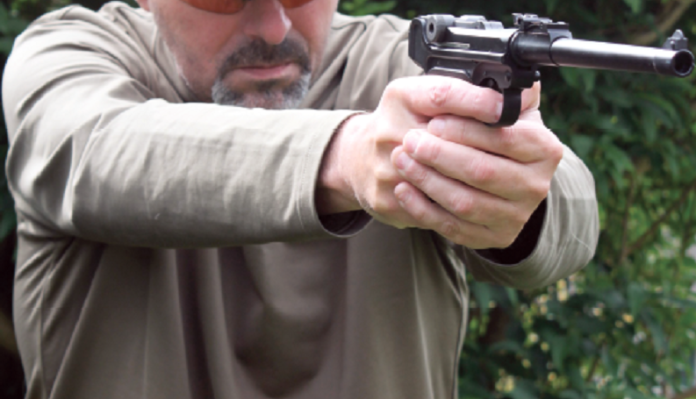 If the AK47 is the best known military firearm in the world today, then in my opinion, the Luger pistol is not far behind! The Luger has seen action with nearly 20 armed forces around the globe, from its initial adoption by the Swiss in 1900, through both World Wars, to its eventual phasing out by the Norwegians in 1987. As a civilian model, the Luger is a much sought after prize, and even today replicas are still made.

Georg Luger was born in Steinach in Tirol in 1849. As an officer in the Austrian Army and with a real love for things mechanical, he became acquainted with small arms designer Ferdinand Mannlicher, the inventor of, among countless other designs, the Austrian Infantry Ordnance Rifle; together, these two talented individuals even produced an automatic rifle! In 1891 Luger held a position with the firm of Ludwig Loewe of Berlin, from where he was sent to exhibit another military rifle in the United States, and this is where he probably first met Hugo Borchardt. Jump forward to 1894 when Luger started exhibiting a new weapon to the United States Naval Ordnance Board; that new design was a semi-automatic pistol named after its creator, Borchardt. During 1893, the ‘Automatic Pistol, Borchardt Patent’ was offered for sale on the commercial market to the world at large. The pistol was of the finest precision workmanship and only the very best materials were used in its construction.

The Borchardt pistol used a toggle lock system, which meant that when the gun fired, a two-piece arm rose and flexed as the gun recoiled, which allowed the breech to unlock and release the empty cartridge case. Deutsche Waffen und Munitionsfabriken (DWM) employed Georg Luger to promote the Borchardt pistol in military and commercial channels. The pistol was tested by the U.S. Navy as early as 1894 and later by the U.S. Army. Although it was accurate and its rate of fire was rapid, the Borchardt pistol was expensive to produce and unwieldy to handle due to its almost vertical grip and distribution of weight. Furthermore, its recoil was unexpectedly powerful. However, Borchardt refused to make any changes to his original design. DWM then appointed Georg Luger to make the requested improvements to the pistol. Luger took the Borchardt design, using the shorter 7.65 x 21mm Parabellum cartridge, which allowed him to incorporate a shorter stroke of the toggle mechanism and a narrower, angular grip; he essentially just re-designed Borchardts’ locking system into much smaller package

The Pistole-Parabellum (Pistol Parabellum) to give the Luger its proper nomenclature, was a semi-automatic self-loading pistol patented by Georg Luger in 1898 and was manufactured by DWM from 1901 onwards. The Parabellum name originates with the Latin saying “Si Vis Pacem, Para Bellum”, which translates to “If you want peace, prepare for war”. The first country to adopt Lugers for military use though was Switzerland, not Austria or Germany; in May of the same year the Model 1900 was adopted by the Swiss, chambered for the 7.65mm Parabellum round.

In 1902, following a request from the German Navy, DWM and Luger developed a new round, the 9x19mm Luger/Parabellum, by shortening and re-necking the case of the 7.65mm Luger round. The Luger Model 1904, in 9mm, was adopted by the German Navy; the Navy model had a 150mm/5.9-inch barrel and a two-position, 100-metres/110- yards or 200-meters/220-yards, rear sight. This version was known as the Pistole 04. In 1908 the German Army (Reichswehr) followed suit by adopting the Pistole 1908, or more simply just the P.08, which had a 100mm/3.9-inch barrel and was chambered in 9x19mm Parabellum. The Lange Pistole 08 (Long Pistol 08) or Artillery Luger was a pistol/carbine design developed for use by German Army artillerymen as essentially an early Personal Defense Weapon. It had a 200mm/7.9- inch barrel, an eight-position tangent rear sight (calibrated to 800-meters/870-yards) and a wooden shoulder stock/holster. It was sometimes used with a 32-round drum magazine, the ‘Trommelmagazin 08’, which was also compatible with the Bergmann MP18. Early issue LP.08s had micrometer adjustable front and rear sights, which required a two-pin tool for adjustment.

The Luger was also available in various commercial carbine versions with yet longer barrels.

Replicas of the Luger pistol are still being produced today. It has been popularised through its use by Germany during World War I and World War II, especially in the movie world, though it was also used by many other countries. As a firearm ‘icon’, the creation of Herr Georg Luger is certainly up there with the best!

I have actually owned a couple of airsoft Lugers over the years, both of them replicas of the 3.9-inch barrel P.08, and for some reason that I can never actually remember, I’ve traded both of them on, as other projects took precedence. NUPROL bring in three models of the Luger with four-, six- and eight-inch barrels in both black and ‘chrome’ and they are all super-looking pistols, so I decided for once to look at the ‘Artillery’ version, as this particular model has the classic shape but with the longest barrel in the family and the tangent rear sight.

Even with the eight-inch barrel, I have to say that the Luger is a joy to have in your hand; we talk a lot these days about ‘balance and ergonomics’, as if these qualities were something new, but this pistol, dating back originally to the late 1890s, has both in spades. The Luger for all its deadly efficiency is a stunning piece of design, almost graceful in its lines, and due to the nature of the magazine placement and the ‘toggle’ nature of its operation, all the weight sits directly above your clenched fist. The angle of the pistol grip is nigh on perfect, so much so that this was copied in the best-selling Ruger .22 rimfire pistol!

Weighing in at 940g/2lbs unloaded, the replica is actually slightly heavier than the real thing, which comes in at 871g/1.92lbs, but other than that all other dimensions are absolutely correct, and the standard of finish throughout is absolutely superlative, with a mix of dark grey and semi-gloss black giving a real feeling of quality. The single stack magazine is also metal and holds 15 rounds; this is slimline and lightweight adding neither much weight nor bulk to the pistol.

Where the Luger really excels though, is in its operation, which is unique. Unlike most semi-automatic pistols, there is no slide clattering back and forth, as the chambering of a BB is achieved by the toggle mechanism rising and falling. This is absolutely superb to see in action, and the mechanism cycles smoothly and efficiently. When cocked, an efficient thumb safety sits to the rear on the right.

Getting down to business, the magazine is easy and straightforward to load with BBs, and also to gas up. With 10 .20g BBs loaded and the magazine filled with NUPROL 4.0 gas it was off to the chrono, where the Luger delivered a very consistent 1 Joule/329fps with very little variation shot after shot. Reloaded with a full magazine the ‘Artillery’ delivered some superb groupings at 10-metres, just as I’d expected given the long barrel and the tangent rear sight; that said, you do need to pace your shots well to achieve this, as you lose the sights every time the toggle rises!

All-in-all, I can tell you that I do have a soft-spot for the Luger. For a pistol design that’s over 100-years old it really is still a corker, and after having this one on the range for the afternoon I remember why one always ends up in my collection at some point. It’s different, its shoots very well indeed, and when you consider that you’ll only pay around 90 quid for one of these, I believe that’s cracking value as well. Militaria shops such as Soldier of Fortune (www. sofmilitary.co.uk) do some great holsters and accessories for Luger pistols, so it’s not hard to get yourself set up well either.

If you’re a bit of a history buff, into WWI and WWII airsoft, or just like something out of the ordinary then I’d really suggest you take a look at the ‘Artillery’ Luger from WE Airsoft Europe. For more details on all the Luger variants.