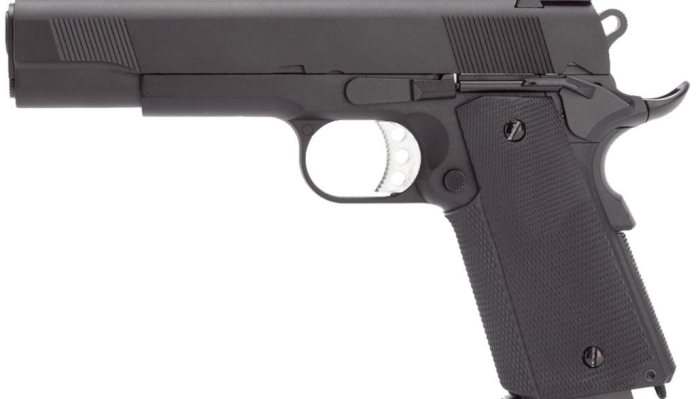 Immediately prior to Christmas 2017, the news was announced that the RAVEN pistol (singular at that point in time) would be hitting retailers almost immediately, and the fact of the matter is that from reports back this initial batch has already pretty much sold through! Let’s face the fact that many of you out there already own a NUPROL DELTA series AEG ‘Primary’ and are over the moon with it, so having the chance to buy a ‘Secondary’ with the same level of attention to detail, performance, and manufacturer support is really a bit of a ‘no brainer’ in my opinion!

I quizzed Ross of NUPROL on the branding and he told me- “The raven is symbolic of mind, thought and wisdom in Norse legend, as the god Odin had two Ravens as his sidekicks. The first was Hugin who represented the power of thought and the active search for information. The other raven, Mugin, represented the mind, and its ability to intuit meaning, rather than hunting for it. Odin would send these two ravens out each day to soar across the lands. At day’s end, they would return to Odin and speak to him of all they had spied upon and learned on their journeys.”

Now before anyone stands up and shouts “but this is just a pistol by another brand with a RAVEN sleeve” please let me dispel this line of thinking utterly. As with the DELTA AEG series, Ross and the team have carried out the same process to bring the new pistols to market; working directly with the factories in the Far East they have scoured the parts that are available and put them together in their own unique way to bring us a new series of pistols that are unique to them. If you look in the box for instance when you receive your new ‘EU18’ you’ll find a set of interchangeable backstraps (you might say here Gen 4 style), a little bag containing spare O-Rings and even a spare nozzle! In one go your maintenance issues are solved from the get-go; there’s even a CO2 compatible spring for the MEU! Ross told me here;

“We include all the spares just because we wanted too. We did not want anyone to have a situation where their nozzle breaks and then are not sure what to do, so it’s in the box. Same goes for the O-rings with leaky mags; we are players ourselves so as good as a product may be we appreciate that maintenance is a key factor.”

This is a bit of a fresh approach, a manufacturer that actually understands “longevity”, and is certainly most refreshing!

To go with the new pistols, and with other existing ‘G-Series’ models by popular demand NUPROL also announced the EU Series Light Bearing Holster, which is designed for the user to be able to keep their NX 2/3/400 torch fitted to a EU17/18/19/23 Pistol while it’s holstered, so that it’s ready to use as soon as you draw your pistol.

The hood clicks into place over the top of the pistol keeping the pistol secured but can be quickly drawn by the press of a button which flips down the spring-loaded hood and lets the pistol be pulled straight out. Each holster comes with 2 hoods, one to fit the EU17/18 and a second for the EU19/23. As standard with all NUPROL holsters it comes with the Paddle mount but is also compatible with their Drop Leg, Shoulder Holster and MOLLE mounts.

With IWA fast approaching I’m keen to see exactly what NUPROL have in store for the rest of 2018, and a ‘little bird’ tells me it could just be an entirely new project!