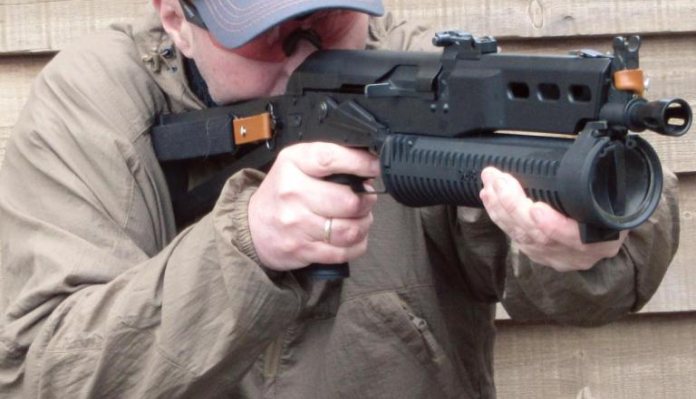 I’m a regular attendee at the annual War & Peace Revival and I have to admit that I spend many happy hours mooching around the ‘modern’ living history displays and deac tents. Regular readers of my reviews may have guessed by now that I have a real love for ‘Soviet’ military firearms, and this definitely extends to my airsoft replica collection.

For some time, I’ve had my eye on a PP-19 Bizon to add, especially for those ‘sneaky’ airsoft roles, but also because it’s quite a unique firearm in the real world; there’s no way that I can get around the fact that my much-loved and muchgamed AKSUs still use a regular AK mag, which, when fitted, makes it tricky to secrete it in my pack, and it’s certainly not the easiest AEG to deploy from concealment either. I’ve tried most of the Bizon models that have been around to date, some of which are ‘okay’ and some of which are downright dogs, but the fact is that even the ‘OK’ models still go for a big chunk of dosh, certainly more than I’m willing to spend on an airsoft AEG that will see only very occasional use and will sit mostly on the display wall!

Unlike some of my airsoft friends, my ‘Modern Russian’ loadouts are pretty paltry affairs in comparison; so, again, the Bizon is not the obvious choice for an AEG that I’ll field on a regular basis, but due to its unique nature it’s still a model that I’ve returned to time and again. I was therefore quite excited when I learnt that NUPROL would be distributing a select number of models from S&T, and that one of them would be a ‘Sportline’ PP-19!

S&T are really one of those seemingly small brands that people have ‘kind of heard of’, because they do unusual things. SMART TEAM INTERNATIONAL INDUSTRIAL LTD, or simply S&T, was founded in 2009, with their headquarters office located in Hong Kong and a subsidiary company in Japan. They are licensed to legally manufacture airguns and airsoft replicas in their factory in China. They also happen to be a group of airsoft enthusiasts themselves; so, as with many Hong Kong-based outfits, they do actually ‘get’ airsoft! As well as manufacturing, sourcing, and distribution, their stated mission is to supply a wide range of quality products with the most competitive pricing for dealers and consumers.

S&T actually make a full range of great looking Spring, AEG and GBB models, both historical and bang up to date; NUPROL had a selection at War & Peace last year and they all looked spot on and, when I got the chance to try the new ‘Sportline’ Bizon, you can bet your bottom dollar that I bit their hands off!

In the early 1990s, the Russian Ministry of Internal Affairs (MVD) made a request for a new, lightweight weapon, primarily intended for counter-terrorist and law enforcement units that would provide fast and accurate fire at close ranges. The Bizon (‘Bison’) was designed during 1993 in Izhevsk, home of the famous IZHMASH state arms factory, by a team of engineers headed by Victor Kalashnikov (yup, the son of the legendary Mikhail Kalashnikov!) and Alexei Dragunov, youngest son of Evgeny Dragunov (creator of the SVD sniper rifle, yup, that Dragunov!) who was also a member of the design team. You might say that IZHMASH brought out their ‘A Team’ for the development of the Bizon and those boys certainly took things in a very unique direction!

The Bizon was heavily based on the AKS-74 rifle and was actually built on shortened AKS-74 receivers, with an AKS-74 pistol grip, trigger unit and folding butt. Later models introduced a somewhat improved shape of pistol grip, with better ergonomics. What made the Bizon unique though, was the combination of a high capacity ‘helical’ magazine with the more conventional appearance and layout of the AKS-74; the large capacity 64-round (9X18mm Makarov) magazine was located directly under the barrel, and served as a forestock, resulting in comfortable firing position and a neat, almost streamlined profile. The controls were similar to those on all Kalashnikov rifles, and therefore familiar for all Russian troops. In keeping with the initial MVD brief though, the Bizon weighed in at just 2.1kg (4.63lbs) thanks to the use of modern, lightweight materials (the magazine was made from a durable glass-reinforced polyamide) and components.

Prototypes were trialed by the Special Equipment Research Institute in 1995 where they outperformed several competitors, and the weapon was accepted into service on December 28, 1996 as the PP- 19. The Bizon was initially issued to armed response units of the Federal Security Service (FSB) and Ministry of Justice but was also used in combat operations against separatists in the volatile North Caucasus region, namely Chechnya and Dagestan, as well as in South Ossetia.

Initially produced to use 9x18mm Makarov ammunition (in both standard and modified forms!), the Bizon later appeared chambered for 9x19mm and even 7.62x25mm ammo; the venerable AKM used a 7.62x39mm M43 cartridge and the thought of something even vaguely similar to that being used in a far shorter firearm makes my shoulder hurt just thinking about it! Subsequent versions appeared in more traditional fettle with cylindrical magazine holding 45 rounds, or with curved box magazine, holding 35 rounds, and it’s said that vintage magazines from PPSh- 41 and PPS-43 were used!

Initially, not an overly popular weapon with the users, and under tactical performance pressure from models such as the PP-19-01 and the SR-3M, the Bizon has been continuously modified over its production life. The current model is the Bizon-2, which has AK-style iron sights, a receiver-mounted side rail adapter for optics and a new slotted flash hider designed to accept a quickdetach suppressor. The Bizon-3 has also been developed with modified sights and a top-folding stock; this models barrel has an adapter for several types of muzzle device including suppressors, muzzle brakes, compensators and flash hiders, which can be selected by the operator depending on the weapon’s tactical employment.

For me, the Bizon ticks all the boxes in relation to the firearm I would want a more ‘covert’ role in an airsoft game due to the fact that it is easily concealable, and that the ‘helical’ magazine makes it far more streamlined and less likely to catch on outer clothing or straps inside a pack. I was pretty excited when the box arrived from Ross, and immediately I was pleased with the lack of weight; the ‘Sportline’ Bizon weighs in at just 4050g, so it’s perfect for carrying all day long.

Let’s look at the phrase ‘Sportline’ for a moment though and think what this actually means in terms of the S&T ‘Avenger’ Bizon. Yes, there is a plastic lower, sight block and side-folding stock, and the gearbox casing feels a little ‘flimsy’ but, overall, it’s a sturdy little AEG. Most of the other parts, including the dust cover, that are supposed to be metal are metal, and the ‘polyamide’ parts are solid ABS plastic. Internally, it’s all pretty standard, if unremarkable; however, let’s not forget that this is a really tried and tested ‘AK’ design and that in many models the V3 gearbox and short-axle motor have historically lasted and given good service for years!

The ‘Sportline’, or ‘Entry Level’, Bizon is essentially a shortened AKS-74 and feels like it, although where S&T have been really clever, is to replicate the ‘helical’ magazine, which, like the real deal, is made of ABS plastic and mounted under the barrel. It mounts by way of two forward lugs and then locks in a similar fashion to a regular AK mag, and is solid as a rock when it’s fitted. The Hi-Cap magazine itself (the blurb says 300 BB capacity but it feels way more than that!) is as unique in airsoft form as it is in the real world, in that you fill it via a hatch in the top, holding back a plunger affair with the hatch, while you pour the BBs in. Releasing this plunger pushes the BBs solidly forward to assist in feeding properly. Winding the magazine is pretty standard, and, once fully wound, it feeds well.

The Bizon is capable of semi and full auto fire, with a typical AK-type safety with the lever on the right side of the receiver. Although plastic, the sturdy, skeletonised buttstock folds to the left side when not needed, but you can’t lock it in this position, as the magazine fouls this; I will say here that sturdy as the stock is, I wouldn’t want to take a tumble on it! Sights are like those found on the AKS- 74U, with hooded front post and sliding rear. There is a rear sling point on the folding stock, but one omission is the slingring on the foresight post, which could make slinging the Bizon a little tricky; again, I wouldn’t want to run a singlepoint sling on this, given the construction.

As a so-called ‘Sportline’, I wasn’t expecting superb performance from the little Bizon out of the box, but oh my, how things have changed! Once upon a time, you’d be ‘fettling’ any entry-level AEG to get it anywhere near full performance, but the fact that the Bizon has a smooth operation and performance came as a bit of a shock! Loaded up with .20g NUPROL RZR BBs and with an 11.1 Stick LiPo fitted, it was time to take the rifle to the chrono, and it delivered a consistent and site-friendly 1.07-Joule/340fps!

Accuracy was again a pleasant surprise, given the short 230mm brass inner barrel, but it was spot-on once the hop was securely set. Shots out to 25m were hitting my sandbags with ease on both semi and full!

All things considered, I think that a Bizon may finally be finding a home with me, specifically for ‘sneaky-beaky’ MilSim work, and the only thing I have changed is the flash-hider; the original is quite unique, but I wanted to use a suppressor with the Bizon, so I switched to a PP-19-01 version. At the time of writing, the 160BB S&T MidCap was not available for testing, but Frank at Fire Support kindly sent me a Silverback version of the same capacity, which worked and fed just fine; these are in stock at £24 a pop, just head to fire-support.co.uk and pop ‘Bizon’ into the search box!

As it would happen, I already had a PP-19 suppressor in hand for some reason (my ‘box of bits’ is a mystery, even to me!) and this fitted perfectly on the S&T, and gives it a real ‘covert’ look, which of course is what I’m after; with the suppressor and MidCap fitted, it’s a proper undercover SMG. Now, I mentioned earlier that the one thing putting me off a Bizon was the price, and this is where the S&T version really becomes attractive, as I’m seeing them in the stores online for as little as £150; now that’s a ‘Sportline’ price for something that is far, far from an ‘entry level’ AEG!

For more information on the S&T Airsoft range and for stockist details, please do pay a visit to nuprol.com.