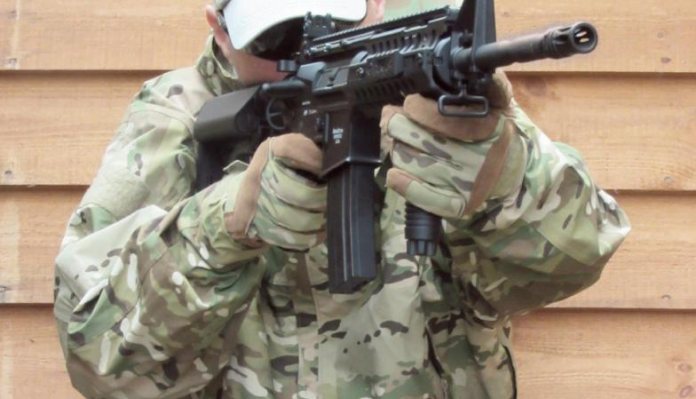 Since 1954, when it was first established as a division of the Fairchild Engine and Airplane Corporation, Armalite has been manufacturing popular AR style sporting rifles and select bolt-action rifles in large calibres such as .338 and .50. The company has a fabulous history including, and probably most famously for employing a young Eugene Stoner; Stoner is credited with designing the original ‘AR’ platform rifle for use by the US military in the Vietnam conflict, and in fact the ‘AR’ designation for these types of rifles stands for Armalite Rifle, not ‘assault rifle’ as most people think.

Their first design, the AR1 developed in 1952, used foam-filled fiberglass furniture and a composite barrel using a steel liner inside an aluminium sleeve. This was little used, but when they were asked to compete in a contest for an aircrew survival rifle their AR5 and AR7 designs from 1956 saw production runs. This was followed by an invitation to compete for the new combat rifle to be issued to US forces, which led to the AR10. The AR10 lost the 1957 contest, but many of its ideas were reused in the smaller and lighter AR15.

Tired of initial poor sales in the firearms market, Fairchild licensed the AR-10 and AR-15 designs to Colt. They sold their interest in Armalite in 1962, and that year Colt hit paydirt when they sold the AR-15 to the US Air Force! Commercial models were then sent to Special Forces in Vietnam, who reported great success with the weapon, especially with the diminutive Vietnamese. This led to it being adopted as the Army’s main combat rifle, as it was adopted in 1964 as the venerable M16.

Armalite had further brushes with success, especially with the AR18, an improved AR15 design. These modest successes were not enough to keep the company going though, and they ceased operations in the early 1980s. Mark Westrom, who re-launched the company as Armalite, Inc., now located in Geneseo, Illinois, purchased the design rights and name in 1996.

In 2015, Armalite introduced 18 new products including AR10 and M15 platforms proving that after trials and tribulations over the years they could still produce modern and effective firearms platform.

Under licence, ActionSportGames (ASG) in Denmark produce a range of 1:1 models bearing the Armalite logo; this is an inclusive range that covers both their Proline and Sportline offerings, so no matter what your budget there’s something for every airsofter out there too look at!

The Next Generation Proline M15 series from ASG has been developed to meet the requirements of experienced players that demand a lot from their RIF, and all the models have been extensively updated. By using enhanced parts, redesigned outer components and highquality internals, the Next Generation Proline series offers quality, accuracy and upgrade possibilities, which means they are good to go right out of the box.

One of the innovative design features of the Next Generation Proline series is the reinforced gearbox packed with enhanced components, all powered by an ULTIMATE basic motor. The entire package is designed to be compatible with ULTIMATE Upgrade parts, ensuring any future upgrade to the RIF will have an exact fit and can be done without special modification to the individual components. The high-performance piston is made of reinforced nylon with the addition of four steel teeth embedded at the peak stress point. The sectional view of the piston is teardrop shaped, adding strength to the areas most vulnerable to mechanical fractures. The piston head itself is an innovative design with large conical shaped air inlets and flared outlets allowing more air to flow through, reducing resistance and increasing rate of fire, while providing optimal compression.

The barrel features an inner diameter of only 6.04mm for optimal compression and performance, whilst the enhanced outer barrel is made from a strong aluminium alloy. The upgraded gearbox shell is made with special compound alloy casting materials, and has been designed with reinforcements at critical stress points, to ensure the box is able to endure the extra stress any potential upgrade will put on it. The combination of taps along the lining and high-strength hex-screws prevents the box from twisting under the stress. 8mm steel double-bushings reduce friction when the gears are under maximum stress, providing smooth running and minimum wear on the gearbox components, and to further ensure long lasting and dependable performance, the gearbox has been fitted with an antireversal latch made from high-density steel.

Built for increased durability, high power and reduced energy consumption, the ULTIMATE basic series motor uses ball bearings and a high density steel pinion gear supported in an aluminium cage to ensure that it will endure the extreme pressures and high rotations in both high-speed or high- torque set ups. The combination of heat resistant enamelled wire and a high durability nylon cover built to withstand wear and high temperature, prevents short-circuits due to excessive heat and carbon dust.

Great care has been taken in designing the receivers, barrel and stock, resulting in components that fit together perfectly, making the individual RIFs sturdy and strong; the solid build quality, along with the POM hop-up and precision barrel, helps ensure accuracy, making all Next Generation Proline models a sure-hit on the range or on the skirmish field.

This ASG M15 S.I.R. (Selective Integrated Rail) Proline model is an absolutely cracking replica of the system developed by A.R.M.S. (Atlantic Research Marketing Systems); The A.R.M.S. Selective Integrated Rail System included more unique and helpful features for the professional user than all other devices combined that were on the market at the time of its introduction. Only the A.R.M.S. S.I.R. System allowed you to have rail sections where you wanted them and not where someone else had decided for you. This modular receiver sleeving system is a universal handguard mounting system that leaves the barrel totally free-floating, while providing a rigid ultra-light platform on which to mount virtually any mission specific accessory.

The ARMALITE M15 S.I.R. has authentic markings fully licensed by Armalite Inc, and it’s a superb base for a project. This solidly constructed Proline AEG, with full metal barrel and receiver, together with a five position collapsible SOPMOD-style stock and front grip made from heavy-duty polymer, really is a durable, dependable and solid replica.

It features a Picatinny style top rail on the upper receiver allowing easy mounting of optics, although it does come as standard with a flip-up rear sight. Pulling the charging handle opens the dust cover, while pulling back and locking the simulated bolt reveals the adjustable hop-up wheel. To release the bolt, press the bolt release catch just like on the real weapon. All-in-all, this is one tidy package indeed and priced around £200 it’s great value for money too!

No matter what your style of play, or indeed your budget, ASG have once again delivered what players want and need, and that’s a solid, well performing and highly accurate AEG, but still built under licence so that you know what you’re getting is as close to the ‘real deal’ as possible. The venerable S.I.R. system now feels a little ‘clunky’ and dated but if you’ve got specific period loadout in mind then it could be the very thing you’re looking for; it’s still a cracking system when it comes to versatility.

You may have noticed that I’ve not yet mentioned power levels and this is for a good reason; as ASG are a respected brand whose products sell worldwide, they set power levels accordingly and the Proline RIF I received for test was definitely on the ‘warm’ side. In the case of the Proline M15, this chrono’d with a .20g BLASTER BB at 1.4-Joule/394fps, so I’d check with your local retailer if you do go the Proline route. Luckily, the M15 features a quick-change spring facility, so this is easily remedied, and it’s probably easiest to just have the retailer change out the spring for you when you buy your ‘Armalite’. That said, this is a super AEG and worthy of a place in any airsofter’s armoury!