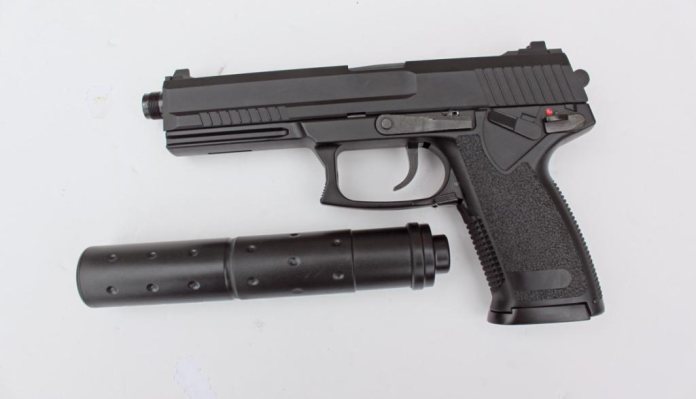 As many of you will know, I was extremely lucky to spend a number of years living in the USA; in fact just a few miles away from MacDill Air Force Base, home of the United States Special Operations Command (USSOCOM or SOCOM). My local gun range was between my home and the base and you always needed to be on best behaviour and top performance as you never knew who was going to be shooting on the lane next to you!

Suffice to say it was my absolute pleasure to shoot every now and again with some very fit, very suntanned gentlemen, many of whom were passing through the base and just wanted to “keep their eye” in. I never asked, and they never told, but it was fairly obvious that these guys were not working in one of the hotels on Clearwater beach, and many of them could quite feasibly have had their hands on the subject of this review, the MK23 SOCOM pistol.

In 1989, USSOCOM began reviewing their equipment to see which gear fitted the needs of their Close Quarters Battle (CQB) role. Most units actually used different firearms, so the logistics of getting spare parts and ammunition for all these weapons was overwhelming. In response, SOCOM decided to standardise small arms among all units, and one area to come under close scrutiny was the pistol. The study of this was part of the Offensive Handgun Weapon System (OHWS) competition. Regular troops had the Beretta M9 in 9mm as their secondary weapon, but SOCOM’s operators do their job ‘up close and personal’ which of course means that pistols are more likely to be used as primary weapons.

So thorough were the requirements and so exhaustive was the testing in the first round of the competition that only Heckler and Koch’s (H&K) submission was left to advance to Phase II! This second round of testing subjected the subjects to the strictest reliability strictures any pistol ever went through; three pistols completed a 30,000-round endurance test and maintained accuracy of 2.5 in (64mm) at 25 meters; only the o-rings needed replacement after 20,000 rounds. The weapons worked in temperatures from -25 degrees Fahrenheit to 140 degrees Fahrenheit while exposed to mud, ice, and sand.

Phase III was the awarding of a production contract to H&K in June 1995. Their pistol was given the military classification of MK23 Mod 0, and 1,950 systems were ordered at $1186 each. All pistols were produced in Germany and the first was delivered to SOCOM on 1st May 1996.

The real Heckler & Koch MK 23, MK 23 MOD 0 is actually a complete system consisting of a semi-automatic pistol, a laser aiming module (LAM), and suppressor. It was adopted by USSOCOM for Special Operations units use throughout the duration of the 1990s, although some are undoubtedly still in service today.

When the Stealth Assassin arrived with me it was immediately recognisable as a replica of a MK23, right down to its huge physical size and the long suppressor that was included as a part of the deal! Nowhere on the box or the gun though was any mention of the manufacturer though so some detective work was definitely in order. The only giveaway to its origin was a small cardboard cover for the included test batch of .20g BBs that had the legend “Y&P, Made in Taiwan”; on further digging I discovered that Y&P are actually one of the oldest airsoft gas gun manufacturers in Taiwan with a range of models derived from HFC and KJ.

With that under control, it was on to look at the pistol itself; one of the bigger handguns, almost as large as a DEAGLE, the Stealth Assassin comes in a simply illustrated box marked “Special Operation Stealth Assassin 1:1 Gas Non- Blowback Airsoft Gun”. The box gives the information that the pistol is 427mm (including the suppressor) in length, weighs in at 1000 grams, has a magazine capacity of 28 BBs, and can be used with .20g to .25g weights of ammunition.

Although the box shows the MK23 replica with a suppressor and LAM, what’s actually in the box is the pistol and magazine, the suppressor, the small pack of .20g BBs mentioned earlier and a rather surprisingly well written English language instruction manual that contains an exploded parts list. It’s not provided with the LAM but TM LAMs come up regularly online fairly cheaply and could probably be fitted with minimum fuss if you want the full operator look.

There are no trade or manufacturing marks whatsoever, not even a ‘Made in Taiwan’ or ‘6mm’ so it really is a ‘stealth’ MK23 in all ways.It is predominantly made of a sturdy, matt black plastic with no obvious mould marks or blemishes; the finish is actually pleasingly crisp and clean. Metal parts include the magazine, trigger, inner barrel, hammer, magazine release, and safety controls.

The suppressor is actually quite a nifty bit of kit in itself; although it adds to the overall look of the pistol, there’s a lot more going on here, as it actually adds an additional 190mm to the inner barrel! I’ll come back to this later.

While the pistol is a non-blowback model, you can cock the gun by pulling the slide or the hammer before firing. You don’t actually need to cock the slide as it’s really just the hammer that needs to be pulled back as this serves to load a BB into the chamber. There are two safety levers; the longer lever which is immediately above the trigger and the ambidextrous shorter lever which is located at the rear part of the pistol. The pistol needs to be made ready to fire with the hammer back before either will engage, but this is a nice feature as you can have the gun made ready with redundant safety features in place.

Once you have that magazine loaded and gassed up, I have to say that the performance of the MK23 came as a little of a shock to me; non-blowback guns are usually a little more powerful than their blowback counterparts due to the fact that no gas is used to move the slide, but the Stealth sent .20g BBs downrange at a healthy mean of 330fps! When the suppressor was attached the chrono reading actually rose to a mean nigh on 380fps, which is going to be a little ‘warm’ for most CQB sites. That said the additional extra length of the inner barrel contained in the suppressor shroud also increased the accuracy which means you could be taking shots from over the minimum engagement distance asked for by most, so I think you’d have to have a quiet chat to your local site operator about using this.

I’d say that the Stealth Assassin is not an out-and-out skirmish gun, but like the real MK23 a precision tool designed to do a very specific job. Whilst it could happily be used without the suppressor in any environment, I would look at it more as a way of taking out sentries in a MilSim environment given the range and accuracy. And here’s the very best bit: John at J-Tac Custom has them available right now for just £59.95, with spare magazines at £21.95 which means you can get a lot of gun for your money if you’re in the market for a new handgun!

For more information please visit www.jtac-custom.co.uk or simply email them info@jtac-custom.co.uk2710–2713 With the suppressor attached the ‘Stealth’ becomes a powerful and accurate bit of kit