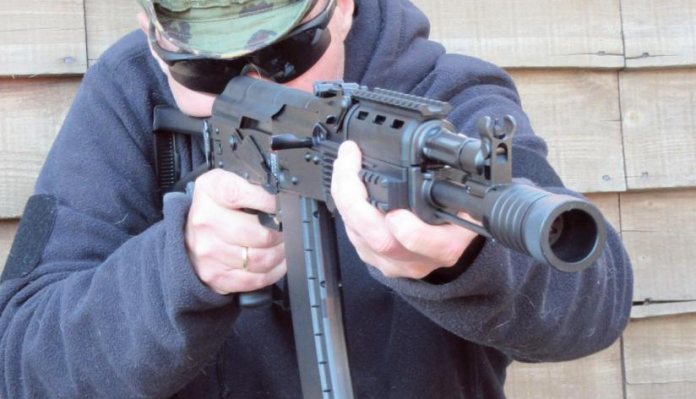 Love them or hate them, Tokyo Marui (TM) are still a name to be reckoned with in the airsoft market, and woe betide any manufacturer out there that doesn’t keep a careful eye on what they’re doing. Although TM are notoriously bad at speaking to airsofters outside their native Japan, many players love them for good reason; somehow, they imbue their AEGs with a little ‘unicorn dust’, performing stupendously out of the box, even if the power level seems low.

TM are one of the ‘original’ airsoft manufacturers from Japan, and they are surrounded by myth, legend and of course hold the title of the originators of ‘hop’. Once all-plastic, their AEGs are now characterised by their high-quality metal parts and realistic look and feel; most parts that are metal on the ‘real-steel’ counterpart are also metal on the replica! Of course, over the years, they’ve had the odd ‘lemon’ but as they offer an absolutely massive number of variants, then that’s bound to happen at some point, even with the most scrupulous quality controls in place, but it is indeed a very rare thing when it comes to their RIFs.

Over the years, I’ve had numerous TM AEGs, and I have to say that they’ve all been excellent; both internally and now externally they are little bits of perfection. It’s strange, though, how ‘TM’s come and go, as although I always love to have one of their models in for review, and enjoy shooting it at the time, they never seem to stick around! In fact, the only ‘TM’ I currently own in my collection is not a complete model, but rather the internals that are fitted into my custom MC51SD!

I was really excited, given my love of ‘Kalashnikov’ variants, when TM released their ‘AK74’ recoil model; but, after being spoilt for so long with full-travel bolt GBBRs, although it was a lovely rifle, it was (very!) sadly underwhelming in terms of the ‘felt recoil’. Don’t get me wrong, the TM ‘74 is an absolutely lovely model to own, and like all TMs, is an absolute tack driver in terms of accuracy, but it felt light on the ‘shoulder bump’; not at all what I’d hoped for…

As always, though, I’m always happy to look at a newer model and see how things have moved on; so, when Fire Support offered me the latest ‘AK-102 Recoil Shock’ to try, I jumped at the opportunity.

Compared to the AK-101 and AK- 103, which are full-sized rifles of similar design, the AK-102, 104, and 105 feature shortened barrels that make them a middle ground between a full rifle and the more compact AKS-74U; the ‘100 Series’ rifles have longer barrels, full length gas pistons, and solid, side-folding polymer stocks, whereas the AKS-74U is shorter, and features a skeleton stock.

The ‘100 Series’ receivers are made of stamped steel. The magazine is lighter, and more durable than older models, being made from reinforced fiberglass. The buttstock is made of a reinforced polymer, making it lighter, more durable, and it is hollow, allowing a field kit to be stored inside it.

The AK-102 uses an adjustable notched rear tangent iron sight calibrated in 100m increments from 100 to 500m. The front sight is a post, adjustable for elevation in the field. Horizontal adjustment is done by the factory or armoury before issue. The AK-102 has a muzzle booster derived from the AKS-74U.

Interestingly, the AK-102 is an export version built by the Izhmash factories in Izhevsk, Russia, and it is chambered to fire 5.56x45mm NATO ammunition for the international market; it is in military use in Malaysia and Thailand, which seem strange ‘end users’ to me!

When the AK-102 arrived from Fire Support, one of the very first things I noted were external details, which immediately made me raise an eyebrow, initially in a good way, but subsequently in a less positive light. As I’ve come to expect with the newer TM AEGs, the finish of the parts, and in particular the metal body, is absolutely impeccable, and by this, I mean totally faultless. Build quality, even in the ‘plastic fantastic’ days was always a positive when it came to TMs, and the 102 shows that this is still something that they hold dear.

Externally, the TM benefits from a full metal receiver, a ‘polymer’ railed handguard, a metal side-folding stock, fully adjustable front and rear sights, the correct AK pistol grip (albeit slightly oversized, as there’s a motor in there!) and the quite unique AKS-74U muzzle booster. The finish of the AK is superb throughout to be honest, and it is absolutely solid as a rock, with not a wobble or a creak apparent anywhere.

However, you may have noticed that I mentioned ‘metal side-folding stock’ in the paragraph above, and this is where sadly TM have let themselves down. Bearing in mind that they make a side-folding ‘polymer’ stock for their ‘AK74MN’, I can’t see exactly why they haven’t carried this over to the 102, which would have made the latter absolutely ‘pitch perfect’. The metal ‘74U’ style folder is absolutely fine and solid, but it’s wrong, and this spoils things a little.

Back to positives and the 102 comes with a single 480BB ‘AK 74 Polymer’ Hi-Cap magazine; unlike previous ‘recoil’ models, the magazine does not appear to be bespoke to the Recoil AK, although you will need TM ‘AK74’ magazines. If you fancy fitting an optic to your TM though, then one additional feature that comes as standard is an AK sight mount on the left-hand side of the receiver; you’ll need to buy the correct sight rail to clamp to this though, and I have to say that the ‘74U’ style stock does still close over the mount. Of course, if you fit an optic to said mount, then the stock won’t close!

Internally, TM AEGs are superlative, and the parts used are absolutely first rate; the ‘recoil engine’ has now been around for a little while and uses an EG Hyper 1000S motor and a new EBB system. There is a completely new design Version 8 gearbox, which gives strength and durability, as well as performance, whilst being compatible with previous gearbox parts. Even though this new metal gearbox design has been beefed up, it really is a completely new design and may need some getting used to when accessing or modifying the internals if you’re used to existing TM models. Powered by a battery hidden under the top section of the foregrip, the package as a whole is neat to the point of perfection, although you will struggle to fit anything other than the recommended 8.4V battery; I managed to sneak in my smallest 7.4V LiPo ‘PEQ’ battery and this has worked well so far.

I’ve always found that TM AEGs perform amazingly, and to this day I still have no idea how they manage to get the range and accuracy that they do! I ran the ‘recoil’ through the chrono on .20g RZR BBs and recorded a massively consistent and site friendly 0.95-Joule/320fps. Using just the iron sights, which are indeed easily adjustable, I was easily able to hit targets and group pretty tightly at the limit of the 30m range!

Now, I don’t know exactly what refinements TM have made to the 102, but the system does deliver a stronger recoil than their ‘AK74’ and indeed other EBBs I’ve had in the past. Is it up to the level of a GBBR? Probably not, although with each ‘generation’, TM seem to coax just a little more from their internals! The real plus of the TM system v a GBBR though, is that even when it’s warm, firing a GBB rifle will eventually have cool-down effects that will affect your FPS, rate of fire and range; with the TM, you get all the benefits of the gasser, without the cooldown, which makes it a year-round rifle.

Now, although the ‘AK-102’ seems to be a bit of a ‘halfway house’ in design, given that folding stock, the ‘mid-length AK’ is all the rage at the moment, given the number of ‘modern Russian’ military builds going on. TM offers this in one tidy package, in the form of the 102, and I suspect that many of you will buy it and swap out the stock with a ‘Zenitco’ version anyway. The 102 is fundamentally a great little rifle, and priced at £388 it’s cheaper than the ‘AK74’, and the apparent move forward with the ‘recoil shock system’ is a very positive one indeed.

Featuring an up-to-the-minute design, a great feel, absolutely first-rate parts and build-quality, and excellent performance out of the box, this is an absolutely cracking bit of kit and if you’re in the market for something other than an ‘Recoil M4’, then I’d really suggest you take a good long look at this super little AK from Tokyo Marui!

Thanks as always to www.fire-support. co.uk for supplying the test/review sample. Please do visit their website to check out this model and the comprehensive range of Tokyo Marui models they offer.