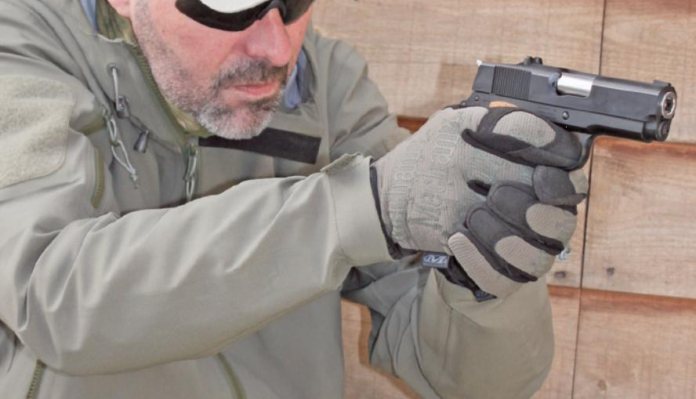 If you’re new to airsoft then Tokyo Marui might not be the first manufacturer to spring to mind, but believe me when I say it’s a name that you’ll soon come to see as airsoft!

Tokyo Marui, or TM as they tend to be known, was really one of the originators, if not the originator, when it comes to airsoft replicas. As the range, initially for sale in Japan, grew TM became an international benchmark for replicas.

I have to admit that I’m a huge fan of the Colt 1911 series, and over the years have owned a few different models of .45 from different manufacturers, but there was always one replica that eluded me, namely the compact Detonics.

During the 1980s I regularly tuned in to a cop show called Miami Vice with the main characters Crockett and Tubbs. Sonny Crockett, played in the series by actor Don Johnson, used numerous primary handguns like the SIG220 and the Bren Ten, but throughout all of the three series his trusty, ankle holster mounted backup was the diminutive Detonics Combatmaster.

Now, contrary to popular opinion, the Detonics was a completely new design and not a cut-down version of a full-size handgun. The idea of the Detonics Combat Master originated with an engineer called Pat Yates at EXCOA. By the mid-1970s, Mike Maes, a manager with EXCOA, and the shooter Sid Woodcock formalised collaborative work and Detonics as a company was born. If you’re interested in more of this there is an excellent reference book available: ‘Combat Master – Sid Woodcock and Detonics’ by Allen J Chin.

In the Combatmaster we have a compact pistol that is unique, and TM do a great job in nailing it! Weighing in at 634g, it’s not exactly a heavyweight, and what weight there is comes pretty much from the magazine and the metal blocks attached to the inner side of the faux wood grips. As with many Marui pistols the frame and slide are reproduced in a tough ABS.

That said, the finish is absolutely impeccable, even down to the DETONICS .45 legend on the left-hand side of the slide. It feels very, very solid in the hand and there are some lovely finishing touches like the silvered outer barrel, hammer, and trigger; the 18 round magazine of the replica is also silvered so the protruding floor plate mirrors what’s above it.

If you’re used to a regular 1911, the controls of the Detonics are pretty much identical. The rear safety catch is placed on the left-hand side of the frame, and the hammer can be dropped to ‘Condition1’ with this applied. The magazine release is also located on the left, just behind the trigger.

For testing I ran the pistol on NUPROL1 gas and made use of NUPROL .20g BBs. Tokyo Marui quote the stock power as being 250fps with this weight of BB, and a string of 10 shots gave an average through the chrono of 253fps so they aren’t far off. It really is deceptive though as this little beauty goes off with a real crack!

The trigger is light and responsive and as there’s so little weight to the ABS slide it cycles really well; you can get shots away as quick as you can pull the trigger and although there is a hop-up system in place I didn’t need to make any adjustment. Even though the barrel is obviously short (the whole pistol is only 178mm long after all) it sends BBs out nice and flat; at 10 metres this is as accurate as I could wish for.

Aftermarket grips are easily attachable, but again bear in mind that most of the weight of the pistol is created by the metal blocks attached to the standard grips. I’ve changed mine out for real wood and although the pistol has become even lighter it somehow ‘feels’ better.

Overall the little Detonics is superbly built, functions perfectly, and is grininducingly fun to shoot. If you want a little handgun to tuck away sneakily in your kit somewhere then this is one worth some very serious consideration.

The Combatmaster is available in three versions: all black, black frame/silver slide, and silver frame/black slide. The single colour version comes in at £130, with the others at £133; spare 18 round magazines are available and cost £25.50.

Most airsoft retailers worth their salt will stock TM, but mine came from Fire Support. For more information on the Combatmaster GBB pistol and other excellent replicas from Tokyo Marui please visit them at www.fire-support.co.uk.