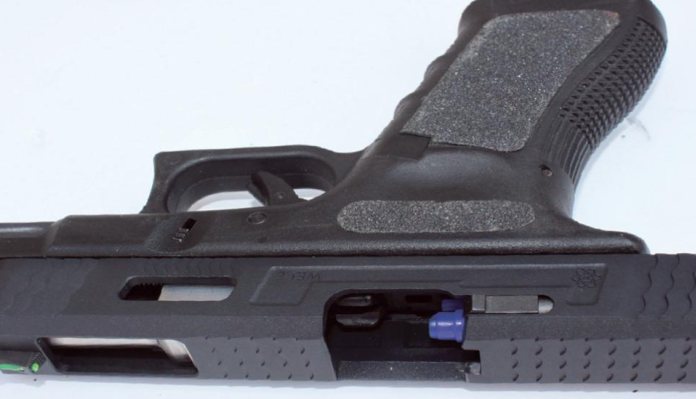 I’m just going to come out and say this: I’m a fan of pistols from WE Airsoft Europe and have been for some considerable time! I own a number of their handgun models and each and every one has been a joy to own, functioning flawlessly and giving great service. I own models from their 1911, Browning and Luger series in relation to historical models, but when it comes time to bring things up to date it’s their F226 and recently rebranded EU (the old G series) models that get my attention.

Between the F226 and the EU17 you pretty much have both US and UK ‘SF’ themed loadouts covered for skirmish purposes, right up to and including the very latest EU17 Gen4 which is the current issue sidearm for the entire British Army! I’ve had an older Gen3 17 in my collection for some considerable time and it has always, from right out of the box, been an excellent pistol. Even as a totally stock model I’ve been in situations where the 17 has outranged other brands pistols that have had extensive custom work done on them, much to the owners horror in most cases.

When I got the nod from my friend Ross Tucker, the enthusiastic and committed Marketing Manager at WEAE, that something pretty special was in the pipeline for the EU series I immediately got his assurance that something would be heading my way as soon as it landed in the UK warehouse. Having worked with the existing models for a good while I will admit that he had me scratching my head as to what would be forthcoming.

So, a little time passed until I got another call from him inviting me to the WEAE offices just outside London. Driving up I will admit that the excitement did indeed start to build, and I was not to be disappointed when Ross introduced me to the EFORCE EU19 Custom.

There’s quite a big trend at the moment for performance pistols and pistol parts out in the real world, led by companies like Salient Arms International, with some big names in the shooter world getting behind them. These tricked-up handguns feature ported slides, fibre optic front and rear sights and striking ‘gold’ and ‘chrome’ finish barrel assemblies, and up until now getting something airsoft to look even close meant a donor pistol and an expensive, aftermarket slide and barrel kit imported undoubtedly from the Far East.

When I was handed the box and opened it up it was immediately apparent that someone at WEAE had been doing their homework rather seriously, as the handgun nestling in the packing was an EU19 on acid! Ported slide? Tick. Gold coloured barrel assembly? Tick again. Fibre optic front and rear sights? Yes! And so the list went on; the grip comes pre-stippled and fitted with a silver magwell extender as standard, and the magazine itself has an oversized floorplate for ease of loading. The trigger is simply a work of art, looking more like a competition trigger than anything. Even the rear of the slide has a skull motif rather than just a flat plate!

So far so good, the EFORCE EU19 certainly looked the part, but how would it perform? In a word, staggeringly! Taking the pistol to the range proved it to be a beauty to work with, especially with the new holsters from WEAE’s ever-expanding NUPROL range. Ross sent me away with a nicely achieved roto-retention holster, twin magazine holder and a drop leg platform to test alongside the pistol.

I’m not normally a drop leg fan, preferring the tried and tested ‘practical pistol’ belt setup, but I have to admit that the NUPROL panel being fully modular is easy to live with and works very well indeed. I’ll return to this in more detail with a dedicated review at a later date.

I charged up the magazine with NUPROL 4.0 gas, loaded up with .20g BBs and got to work. The EU19 chronoed in at a solid 332fps and certainly went off with a crack. Whether it was my imagination I can’t tell you but as I blazed away it felt like the cycling of the slide actually got faster! Accuracy wise at 10 metres the EU19 was absolutely spot on. Moving up to a .30g BB I did obviously see a drop in the FPS, but the trajectory of the BB was flatter and the strikes on target solid; if you’re looking for a pistol out of the box that would let you compete in the Standard section of a competitive shoot then you really, really need to take a look at the EFORCE EU19 Custom!

As I mentioned, I already own a standard, stock EU17 and many is the time I’ve thought that it would be great to trick this up and make it a bit more of a race gun. Sadly though, although kits have been available for other brands there’s never really been a good one for the EU17.

Until now that is! The other thing I was presented with during my visit was a rather fetching box that when opened revealed the same type of slide as the EU19, the same sights, and a very nice chrome barrel assembly. Included in the kit are slide, outer barrel, hammer spring, spring guide spacer, and a new hammer frame, in fact all you need to transform your old EU17 into something completely new. The kit also comes pre-installed with a blue nozzle rated for CO2 magazine use. You will need to use your existing EU17 as a donor pistol, but the kit installs straightforwardly with a minimum of tools.

Having put everything together I was interested to see if apart from making my old 17 look exceedingly pretty the new kit had any bearing on performance. Once again using NUPROL 4.0 gas and .20g BBs in a brand new magazine, to keep things consistent I ran the new pistol through the chrono. Pre slide change I’d always got a pretty average 280fps; with the new slide on that shot up to a very respectable 320fps and the slide once again seemed to cycle faster!

These great kits retail for £54.99 so they are certainly not going to break the bank; if, like me you’re able to see a dramatic improvement in your old pistol then I think you’ll agree this is money well spent. The EU17 is now going to head off to Action Air UK (www.actionairuk. com) for some fine-tuning, as I reckon Mark there can probably coax a few more fps out of it, and I’ll be having him stipple the grips while it’s with him!

WE Airsoft Europe have once again proved they have their finger firmly on the pulse of new directions in the airsoft community. Practical style competitions are being spoken about more and more often and WEAE have placed themselves firmly ahead of the field in this respect.

The EFORCE EU19 Custom is well priced at £159.99. You can have it in Black/Silver Barrel, Black/Black, Black/Gold,Tan/Black, Tan/ Silver or Tan/Gold; whichever you choose they are all very, very attractive and no doubt shoot every bit as well as the model I had in for test. Slide kits are currently available for the EU17, EU18, EU34, and EU35 with more planned. WE Airsoft Europe are also looking to other models in their range to overhaul, and there are some more pretty exciting things which they shared with me in confidence that are on the way. Keep your eyes peeled here in coming months as I’ll be ticking off the new additions as they arrive!