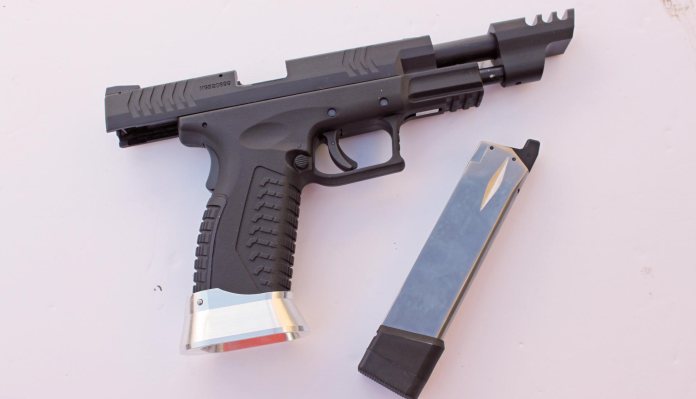 For many non-airsofters the lure of replica firearms is sometimes a difficult one to get their head round, and in fact many people will view airsoft as just an extension of the Cowboys and Indians games that we would play as children. That said, right now there are on-going developments within the airsoft community that are exciting ‘real steel’ competition shooters every bit as much as airsofters.

This uptake and recognition of airsoft pistols as being valid tools for competition purposes has led to the joining of forces between airsofters and shooting clubs, and AIPSC is certainly one of the areas where individuals without a valid skirmishing defence can own airsoft pistols quite legally; if you look at the world of real practical shooting many of the pistols used are custom-built and brightly coloured so having a two-tone airsoft pistol isn’t going to bother people too much in this particular discipline.

With that established I would be the first to note that practical shooters often spend an awful lot of money on their replica handguns as slides are ported and lightened, trigger pulls made crisper, and operation tightened-up. I love the look of these wonderful creations and dabble a bit in AIPSC myself, but I tend to just use my own pistols ‘as they are’, but then again I’m no regular competition winner!

WE Airsoft Europe have noted the practical trend and are once again leading the market forward with the introduction of their IPSC-ready XDM. This is an offthe- shelf pistol replica that has all the required features to let you go out and start competing without breaking the bank!

Going back to 2001, Springfield Armory pretty much stunned the shooting world by unleashing their first generation X-Treme Duty (XD) pistols onto the market. The polymer framed, striker-fired XDs came loaded with features that set them apart from the competition. The striker status indicator and loaded chamber indicator meant you could see at a glance, or a touch, if there was a chambered round and if the striker was cocked. Three separate safeties guarded against accidental discharges and provided extra peace of mind. The Ultra Safety Assurance (USA) Action Trigger System prevented unintentional rearward movement of the trigger. The grip safety kept the pistol from firing unless the shooter had a firm grip on it, and it even used the same grip angle as the famed .45 calibre 1911!

Fast forward to 2007 and Springfield Armory took the next step forward in the evolution of the XD series by introducing the XDM; this built upon the already solid reputation of the original XD by adding a match grade trigger and barrel, hence the additional ‘M’ in the nomenclature.

With multiple interchangeable back straps, the XDM could be perfectly tailored to fit your hand. It shared the same grip angle as the standard XD and the 1911, the XDM pointed effortlessly and naturally. Aggressive mega-lock frame texturing and major grasp slide serrations kept the XDM in your hand and operational under any conditions. Very quickly shooters worldwide adopted the XDM and Springfield had yet another success on their hands!

So WE Airsoft Europe have taken a well-reputed pistol as their base and have then added to it with a great set of features and a fabulous finish. As with the real deal, the XDM replica has a polymer frame and a serrated metal slide; the finish of both materials is very good indeed. Weighing in at 950g, it’s a good solid handful, but the ergonomics are excellent and the grip slim enough even for smaller hands. The backstrap is not interchangeable, but everything else is right and the deep thumb grooving on either side along with texturing of the grip overall means it sits solidly in your grasp.

This XDM is fully equipped with safety features; there are working trigger and backstrap/grip safeties along with an additional lockout safety which is actuated by moving the silver serial number bar in front of the trigger guard to the rearmost position. I really like this feature as you can fully deactivate the pistol whilst in transit.

The XDM also benefits from a hop up feature. This is located inside the slide alongside the rear of the inner barrel and allows you to really fine tune performance if you are using different weights of BBs. You do however need to remove the slide from the frame to make adjustments.

Getting down to the IPSC nitty gritty though, there are a number of great features that come as standard on the replica that usually you need to add as quite expensive aftermarket parts. At the business-end the XDM has a compensator fitted; whilst this does little to the shooting performance in airsoft guise per se it does help to give the pistol a super balance, and allows space to fit a longer inner barrel should you wish to upgrade power and accuracy at a later date.

There is also an attractive flared magwell which helps locate the magazine for swift reloads, and the 24 round magazine is fitted with a rubber ‘bumper’ foot; you’re going to need to ‘box dump’ magazines sometimes when running a course of fire and this will certainly help to protect the gas valve. The magazine release is fully ambidextrous, and one feature that I particularly like is that inserting a fresh magazine releases the slide forward automatically. AIPSC is all about accuracy and speed, and all these carefully thought out little features that will help to shave those all-important seconds off your time!