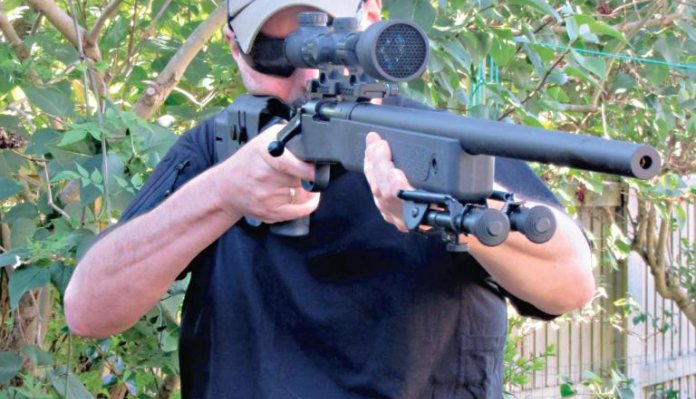 Airsoft is not all about electric ‘AR’rifles and carbines with magazines holding hundreds of BBs to be sprayed indiscriminately. So this month Bill Thomas looks at a bolt action rifle package that is ideal for any fledgling airsoft sniper, or for use on the range where you can shoot for the bullseye at your leisure!

Specna Arms have really been rolling out the new CORE AEG models in the past couple of years, and what a collection they have to offer! The new AEGs have been attracting a huge amount of attention both in print and online and in my opinion 100% rightly so. They offer great performance and a whole host of excellent features, that just a few short years ago you would have been paying top dollar for!

However, nestling inside their huge family of AEGs is a couple of not-so-humble spring rifles that also offer both out-of-the-box grunt and exceptional value for money, namely the SA-S03 CORE and SA-S02 CORE bolt-action sniper rifles. So when I was given the opportunity to have a look at the new SA-S02 CORE and to put it through its paces on the range, it was most definitely an opportunity I wasn’t going to pass up.

In terms of looks, the SA-S02 CORE (and indeed it’s more military looking sibling the S03) closely resembles the seasoned real-world M40 rifle design. The S02 emulates the A3 variant and the S03 the A5.

The M40 sniper rifle has been in service with the United States Marine Corps (USMC) since 1966 and earned its spurs during the Vietnam War. The original version was a ‘militarised’example of the highly successful Remington model 700 sporting rifle with short action (SA). It featured a traditional wooden stock, integrated non-removable magazine and a Redfield 3-9X40 telescopic sight.

During the 1970s, the M40 rifle was upgraded to the A1 configuration, which featured a new McMillan stock, made from polymer, and a Unertl 10X scope. The A3 was the next step in evolution and it was adopted in 2001. This version used the same Remington model 700 SA but with different barrels and improved McMillan stocks. In 2009, the M40A3 was superseded by yet another version, the A5. These rifles were either bespoke builds or upgraded from A3 donors with a new polymer stock and detachable magazine system developed by Badger Ordnance. They also included Schmidt & Bender optics, and a forward rail mount for an AN/PVS-22 night vision unit.

What you get with the SA-S03 CORE model from Specna Arms is the more military A5 looking rifle. It comes with additional rails and a muzzle brake (the real deal uses a Surefire one which is compatible with a suppressor). However, I wanted to keep things fairly low-key, so I decided that the S02 model was more suitable for my needs. Both rifles feature the same internal setup, so it’s really a question of the look and feel you want to achieve that will dictate which one you go for. The basic S02 comes in just under €100, with the S03 at €123.

To keep everything ‘in house’with Specna Arms, I decided upon a plain black rifle package, (both models are available in tan, OD, or multicam furniture) which comes with a Harris-style bipod, 3-9x40 scope and mounts. Each rifle comes with 3 x 20BB magazines, so you’re all set. The package sells for around €140 so is a good bargain!

The rifle consists of two main elements, the stock and the barrelled action. This makes shipping straightforward, and the box is smaller than you might expect. The assembly requires only three hex screws to put everything together and it only took me all of 15 minutes to marry everything up. On top is a standard Picatinny mounting rail, making it very easy to fit the scope that’s included in the package.

I was pleasantly surprised with the standard of the optic provided, as it’s clear as a bell, quite unlike some of the ‘thrown in’ optics you get with a package deal! The S02 also features a short section of rail for the bipod but has two double-sided swivels for the attachment of a quick-detach (QD) tactical sling. If you prefer you can mount the bipod to the swivel stud which brings it closer to the stock.

The furniture itself is made from metal and ‘Ncore’ reinforced polymer, which makes the construction very durable while adding a nice matt finish to the stock. In addition to this, the metal elements feature a ‘Nano’ Coating finish that prevents scratches. These parts include the entire external barrel, chamber, trigger, charging handle, RIS accessory rails and all assembly parts such as the screws. The receiver features laserengraved Specna Arms markings.

The stock is constructed of solid polymer and includes a comfortable rubber recoil pad. The length of pull (LOP) can be increased using inserts and the addition of a heightadjustable cheek piece means the user can alter everything to fit them perfectly. A neat two-position lever safety is located next to the bolt and can be operated with your thumb.

Internally both the S02 and S03 (apart from the Hop-Up chamber and the polymer magazine) are fully-compatible with the ever-popular TM VSR-10. This enables easy power tuning and means that sourcing spare and upgrade parts will never be an issue! The adjustment slide for the Hop-Up chamber is located on the stock, which enables very simple and quick adjustments on the go.

Overall this bolt-action rifle is solid as a rock once you get all the parts together, and I have to say that it looks the business too! Initial power testing on a .20-grain BB gave me a very consistent average of 1.65 Joule/423fps, which is brilliant straight out of the box! Range from new was good out to 50m, using a .30-grain BB. Of course, once the rifle has had a couple hundred more BBs through it, I’m expecting it to reach out even further!

The scope is a delight to use, and the bipod is nice and sturdy when you’re shooting prone, so from me, the entire package gets a big thumbs up.

We’ve now had numerous discussions within my airsoft group and there is general agreement that what Specna Arms are providing in their AEG range is absolutely fabulous value. Right now, I have to say that this carries over entirely to their spring-powered distance rifles! Although, as always, time and further use will tell, my initial thoughts on the SA-S02 CORE are all positive. At the price offered this is a super package, and the only thing that I have personally changed is the mount and optics. I have moved it up to a NP 3-9X50 IR (still want to use this in night games!) with a ‘killflash’ and levelled tri-point mount, as I like things to be as tight as possible to the bore. Other than that, the S02 is good to go, and I’m really looking forward to using it at longer distances as the summer progresses!

My sincere thanks go to the guys from gunfire.com for arranging the SA-S02 CORE package for testing. Please do visit the busy Gunfire website for details of the entire Specna Arms range and much, much more!