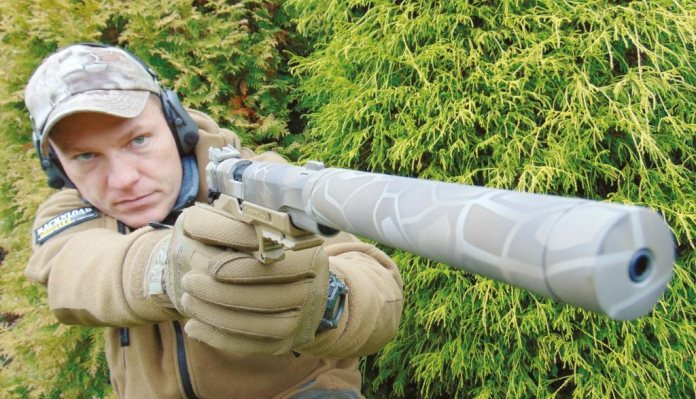 Ok, so the look of these pistols has never really blown my skirt up and subsequently I never really took much notice of them! But, I was recently thrown one to take and try and I thought, OK let’s take it out and set a few steels up and see how it rolls? I had set four different size steel gongs up at 25 yards and subjected myself to some ‘speed steel fun’. Needless to say that after the first mag that I put through it I had a very big smile on my face! Why oh why has it taken me so long to have a play with one of these German Sport Guns (GSG) 1911 A1 .22 rimfire clones?

No less & no more

300 or so rounds later I was thinking that I needed one of these 1911s in my life! Once home from the range, I quickly found a second hand one for sale on the interweb and bagged a bargain for £150! But, before I tell you about my GSG, let me just tell you about them in general.

Right, let’s get the annoying bit out of the way, as to what makes this pistol UK legal? The law states that to be a Section 1 ‘large firearm’ it must have a barrel of no less than 12” and an overall length of no less than 24”. With necessity being the mother of invention we tricky Brits worked out that this could be accomplished by adding a permanently fixed butt extension (coat hanger) to any handgun’s grip to make the magic 24” that includes the 12” barrel. Yes, this does make LBPs look a bit odd, but you get used to it, but it still gives a pistol-like firearm in terms of handling and shootability!

So, the GSG is a semi-automatic .22 Long Rifle calibre pistol that is based on the famous Colt 1911 A1. Now, for those who don’t know, even though it’s an LBP or Long Barrel Pistol, it loads and operates just like its big brother. Let’s talk about the magazines then. It comes with a single, 10-round mag, which is definitely not enough! Suffice to say; you are going to need a couple more minimum, if you want to have some fast reloading fun, or for that matter compete in practical-style shooting competitions!

Steel in construction and pretty damn durable with plastic followers, I can safely say that I have never had any issues with the magazines. Load them straight into the mag well in the pistol grip and there they are held in place nice and tightly with no rattles, as my shake test proved! To eject the mag, just press the button top/left of the grip. Pull the steel slide back and release and it will chamber the first round and set the hammer at full cock, all you then do is flip up the safety catch at the rear left and right of the grip so that the pistol is in Condition 1 (cocked & locked) and you’re ready to go.

The trigger is single action, just like the real thing and GSG has even retained the grip safety. This is a press-in plate at the rear of the grip that is disengaged as you make your firing hand grip, and the hammer will not fall until it’s fully depressed. Don’t worry; it all happens naturally without you even having to think about it! Also good is that after the last round has fired the slide automatically locks open, ready to be tripped once a full mag has been inserted.

As far as ‘controls’ go, the safety is ambidextrous and locks the trigger, hammer and slide, pretty standard like on most semi-auto pistols. The slide release is on the left hand side of the gun and is easy to operate. Again, and like the real thing, all of these controls can be upgraded to offer better functionality and if you like a bit more bling too. For example, the GSG comes with an ambidextrous safety catch, lightened/ bobbed Commander-style hammer and an upswept grip safety as standard; all of which would be upgrades on a real 1911. The rear sight too is more combat-style, with a larger rear block.

In testing, I was using Fiocchi standard velocity ammo and it ran with no issues at all. CCI Minimags were a little bit temperamental for some reason, with a couple of stovepipes and failures to feed. Now, these GSG 1911’s are not amazingly accurate, especially with the open iron sights but for me who was shooting steel gongs, they were good enough. If you want decent scores on paper though it might be worth getting an optic of some sort and a frame mount to provide the interface, they are quite common for many handguns these days. Favourite would be some form of compact red dot sight like Vortex’s small reflex or SHIELD’s Mini Sight. In the old days of real Practical Pistol, optics like them and similar were the top choice for the Open Division (anything goes) competition guns!

Stripping the 1911 is easy enough! Check the gun is empty and clear and unscrew the dummy moderator/barrel shroud and then simply push the slide back slightly so that the slide catch aligns with a small cut-out on the left side. Push out the axis pin located above the trigger, undo a screw that’s in the same place and pull out the slide locking lever. Move to the front and depress the plunger and rotate the locking plate under the barrel at the front of the slide a quarter of a turn and pull it out and then just pull the slide forward. The slide will then come off the frame along with the barrel and the spring! This then makes for easy cleaning. Reassembly is just a matter of reversing the process, though a couple of bits can be a bit fiddly!

So, let me tell you about the bargain that I picked up! £150 I paid for this little beauty but it was looking a little tired and I wanted something special, so it was CERAKOTE time! I contacted Mark Dunford from High Calibre Coatings to see if he could work his magic on the 1911 and he most certainly did with this Kryptek Nomad camo effect! In case you are wondering, this is how he does it –
1. Degrease and clean all parts
2. Blast with aluminium oxide 100 grit to key the surface
3. From this point on gloves need to be worn!
4. High pressure clean off to remove all grit and dust
5. Pre heat to check all parts free of grease or oil
6. If cleaning of grease, allow to cool
7. Hang parts and prep Cerakote colours
8. Apply three colour base coat to parts
9. Flash off Cerakote in oven for +/- 15 min until touch dry
10. Allow to cool
11. Apply Kryptek stencil
12. Apply 4th colour flash off in oven
13. Remove more parts of stencil apply more colour and so on
14. When all colours are applied flash off again, remove stencil
15. Add extra colour to finish pattern
16. Cure off in the oven for 1- 2 hours, dependant on material /temperature ?
17. Check, reassemble, test, if all parts are available

After I sent the parts off, a few days later they arrived back so then it was a quick rebuild and the 1911 was officially PIMPED! Whilst I was waiting for them to come back, I ordered a set of Recover Tactical polymer grips from Brownells in tan. These really are great and totally transform the look and handling of your pistol, certainly when compared to the standard, brown plastic grip plates. Also there’s and integral Picatinny rail in front of the trigger guard for lights and lasers if that’s your thing! Not cheap at around £40 - £50 but oh, they do look good!

The only gripe is the fact that you have to get your Dremmel out and carve out a bit of the inside of the grip on either side to go over where the ‘coat hanger’ attaches to the bottom of the handle. You can get them in black, OD green and tan. I really do think that this colour camo effect looks great against the tan ones though. Will I do anything else to it? Maybe, as I may go for an optic or just upgrade the sights, but for now I’m pretty happy with how it looks and shoots! Safe shooting! - Rack.