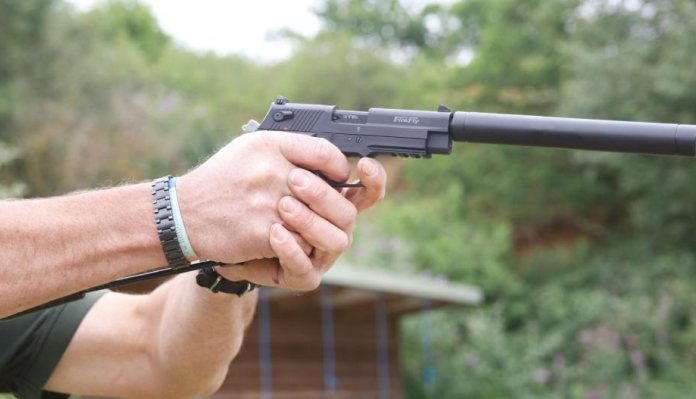 I have been waiting for this particular long barrelled pistol (LBP) for some time, as it represents a quantum leap forward for the marque, as it’s significantly different from most of the single-action (SA) Colt 1911 A1 derivatives. But first, a double history lesson! If you don’t know what an LBP is, I shall explain. After the handgun ban, the new law decreed that the shortest Section 1 firearm you could own was restricted by several factors. If it was a self-loading pistol, it could only be chambered in 22 Long Rifle, a long barrelled revolver (LBR) however, could be in either 22 or centrefires like 357 Magnum etc. Secondly it had to conform to minimum length criteria; the barrel could not be shorter than 12” and the overall length 24” or more and the term ‘Large Firearm’ entered our vocabulary.

Despite making for a very un-handgun likr gun; to my pre-ban eyes, LBPs still offered a working pistol. And I’m glad to say that many shooters took them up and in so doing kept the sport of handgun shooting alive. On test, is the German Sport Gun (GSG) FireFly, so on to history lesson part II. One of SIG SAUER’s most famous modern pistol was the P226, this full-sized, alloy-framed, double stack (15+1) capacity 9mm proved immensely popular. So much so, that they decided to make a 22 Long Rifle version for cross training, or for the pleasure of owning a rimfire copy.

Called the Mosquito, it was simply a scaled down (10% smaller) version of the 226, with all the controls, though they also added an ambidextrous, slide-mounted safety catch. But it was not made by SIG SAUER but by GSG. Good news, as Edgar Brothers Ltd. imports the various GSG .22 rimfire rifles and Colt 1911 LBP, the latter having proved very popular and reliable in competition. So, this new model is going to cause a lot of excitement amongst the community. Not the least of which was Team Red Flag, captain (Eddie Putwain) who writes for me on all matters of practical/action shooting. He has also managed to get sponsorship from Edgars and now his crew all have FireFlys. Eddie has penned a few words on what they think of the pistol from a competitive view point at the end of this article.

The original 226 is a nice piece, with a well-shaped grip and well positioned controls and the FireFly is no different. However, the grip frame is now polymer and shows an integral Picatinny rail underneath, with an integral alloy mounting block for the mandatory butt extension (coat hanger). The slide is alloy and not steel and the 12” barrel is fixed to a metal housing moulded into the frame. Typically, it’s threaded and has a full-length dummy moderator, to cover its skinny tube. From the box, it comes with 1 x 10-round magazine, two recoil springs, which allow you to balance light and heavy loads, two extra front sight blades and a tool. A dummy plastic 22 LR cartridge is also included, which is good for dry practice. An integral locking system is also incorporated. At just over £500, it’s a lot of gun for the money, spare mags are available at £36 each.

Controls, looking from the left side consist of a slide release catch rear/right, a hammer de-cocking lever (above the mag button) a stripping catch (forward of the trigger) and a magazine release button rear/ left of the trigger guard. Sights consists of a fixed/replaceable blade up front, the rear U-notch is windage-adjustable with a screwdriver and all have green inserts for fast line up.

The FireFly offers both double action (D/A) and single-action (S/A) trigger operation, both of which are only relevant to the first shot, as once fired, it reverts to S/A functioning. The magazine fills easily, as it has a side button to aid the operation and fits securely into the grip. Once in, pull back and release the slide and the first round is chambered and the hammer cocked. If you opt for a D/A first shot, press down on the de-cocking lever and release it and the hammer will fall but not fire. From here, you must trigger cock the first shot, which is not as accurate. Conversely you can opt for S/A, load and chamber as before, then push the slide-mounted safety down, which will block the hammer until it’s flipped up to fire. In this SAFE mode, the trigger is still fully functional. However, with the mag removed, the hammer does not function.

After the last round has fired, the slide will automatically lock open; from here, dump the empty and reload, then press down on the slide release to chamber the first round. I found the trigger pull in both D/A and S/A quite heavy at around 12 and 7lbs accordingly. When drawing from the holster, you must consider the first shot; in D/A mode, there’s no safety to operate but the heavy pull does little for accuracy. In S/A, you have the advantage of the lighter break, but the position of the safety catch does not make it instinctive to operate.

As I said, there’s another safety system, (integral safety lock) that totally disables the gun, regardless of whether a mag is fitted or the slide safety OFF. At the rear of the mag well, is a slot-headed plunger, with the supplied tool press down and rotate it 90⁰. In locked position the slot runs parallel with the bore, and when unlocked, it points across.

Though the FireFly proved reliable with all types of ammo, including sub-sonics, its shorter barrel leans towards standard and/ or high-velocity fodder to aid reliability. However, the chances are you are going to have to zero, so proceed as follows: REAR – with a small screwdriver, you can adjust for windage by the slot headed screw on the right side of the block. One full rotation clockwise moves the point of impact approximately 3” to the left at 25 yards, with anti-clockwise moving it right. GSG say to be careful, as the sight unit is plastic and you mustn’t force it.

FRONT - the sight clips in on the inside of the slide and is a bit stiff to disengage, a small screwdriver helps. The gun came with the tallest blade fitted and was shooting about 6” low at 15m, the two spares are short and shorter so will raise the point of impact accordingly. GSG say the shortest will raise it by 7.5” at 25m. Zeroing is best accomplished from a supported position, as handguns are probably the hardest firearm to shoot accurately. And even when sorted, you need constant practice to master the trigger, sight alignment and release.

I was genuinely impressed with the FireFly’s reliability, which is often an issue with any semi-automatic rimfire firearm, certainly those with shorter barrels. From Remington and Winchester 40 and 42-grain sub-sonics, through 40-grain SK and GECO standard velocity, to CCI and Mag Tech high speed fodder it did not miss a beat, except for the occasional duff round, which is unavoidable. Over a two day period I put around 700-rounds through it without cleaning and it was fine. The biggest problem was my bad shooting, as my body has forgotten how to use a handgun pretty much, though I’m improving!

Strip down is easy, remove the moddy and with the slide closed rotate the takedown lever 180⁰ towards the muzzle. Pull the slide back and lift it up so it disengages with the rails and lift it forward over the barrel; note that as it clears the spring and guide rod will come out too. That’s as far as you need to go for cleaning, though and even after 700-rounds the mech was far from dirty. Re-assemble in reverse order, ensuring the base of the guide rod enters the socket under the barrel and the spring sits into the nose of the forend cap. I did find that the stripping catch very firm to rotate. The difference in recoil springs is about ¼”, with the longer one offering a bit more resistance. I ran the gun on the standard unit that comes fitted with no problems.

One thing I think is missing is a spare mag, as from the box one is not enough, I know you can buy spares but it would be a nice feature. On that point, the magazines fall free when ejected and even though the rear of the well incorporates the alloy block for the coat hanger I found changes fast and instinctive. The base is a wide plastic pad, but I’m not sure how it would stand up to dropping on to a hard surface. Chances are most competition shooters will fit a bump pad, which will also aid the reload. Overall, I like the FireFly and reckon it’s one to watch!