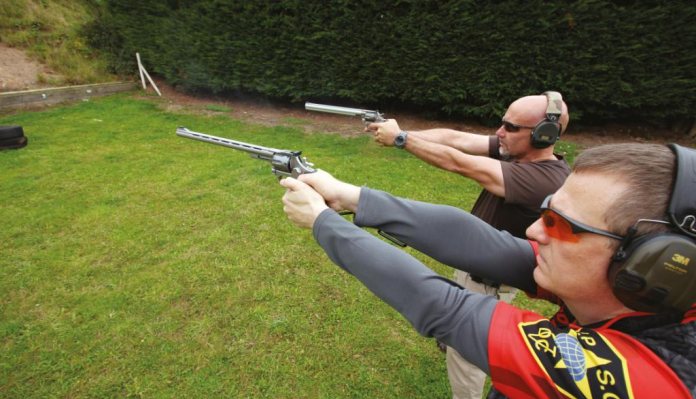 LBRs are available in rimfire and fullbore calibres; however, I’m discussing the latter. These are typically available in 38 Special/357 Magnum and 44 Special/Magnum. The Specials use an identical but shorter case to the Magnum. To be honest, 38 Special is the best bet, as it’s more controllable and potentially accurate and will do the job required.

The two most common makes are the Brazilian Taurus M66 and the ALFA Pro from the Czech Republic. Both have been built to conform to the UK’s 12/24” (Large Firearm) law with a 12” barrel and fixed grip extension (brace) to make the minimum 24” required length! The first obvious difference when you pick up a fullbore LBR is it’s considerably heavier than it’s LBP (Long Barrelled Pistol) cousin, which is only available in 22 Long Rifle!

A point of consideration – it’s worth checking with your club for their rules on jacketed bullets and appropriate loads. It‘s not improbable that the range safety certificate does not allow the use of full patch ammo. So, you will need to buy lead bulleted loads or get into reloading. Financially, the 38 Special is starting to look the best bet! Don’t be put off by reloading, talk to club members who are loading for their own pistols and under-levers for advice. Back to the plot!

On first inspection, both guns are well built, but take slightly different forms, the most noticeable are the barrels. The M66’s is slimmer with a ventilated top rib, with a short lug that protects the ejector rod, the ALFA uses a ‘full-lug’ as it extends for the length of the tube. It also has a removable wood forend, which is a result of the original being offered in carbine format too. This puts more weight up front and adds to stability in terms of recoil control, the downside is it’s a deal heavier! The grip on the Taurus is dimpled rubber, and I found it small and slippery, and I don’t have big hands. The ALFA’s is textured walnut and more substantial and comfortable, being target-like, so fits the hand better.

The Taurus features an unusual, but useful, 7-round capacity in the 38/357 version, the Alfa is a traditional 6-shooter. The brace at the end of the grip takes two different forms; the M66s is made of steel rod and shaped a bit like an off-set fish slice. The Alpha’s is a simple, solid square bar, which was used in the carbine variant to attach the wooden butt.

Once you get used to the M66’s brace, it does give a stable platform and good wrist support, however, it’s oriented to the right-handed shooter only! This can make life challenging in comps with offhand stages. You can have this altered, but only by a Section 5 gunsmith, and that’s another couple of bob. The ALFA’s bar is straight out the back, so ambidextrous, which is simpler and less hassle!

Both guns use modern double-action mechanisms and offer the options of single (S/A) and double-action (D/A) operation. In S/A, you thumb-cock the hammer and press the trigger for each shot, which is more accurate due to its lighter release, but slower. In D/A, the trigger does all the work, as squeezing it brings the hammer back and releases it – faster but less accurate due to the movement and more pressure required from your finger. However, triggers can be honed and there are a number of techniques that will produce better performance.

Sights are of good quality, with adjustable windage and elevation on the rear and sturdy blade up front. Controls are the same, just designed slightly differently. Behind the rear left shield is the cylinder release catch; push it forward and flip the cylinder out to the left. An ejector rod protrudes from the front, which is pumped to push the ejector star rearwards to remove the cases.

Loading ammo singly is simple but a bit slow for action shooting. Speedloaders are essential, these consist of a plastic drum that holds the ammo en bloc with a release mechanism. This is offered up to the cylinder and the bullets aligned with the chambers, then the mechanism released so that the rounds fall in is the way to go. For this, the muzzle needs to be pointing down. However, you must not let the barrel wander out of the shooting box/safe angle, which is equally true on the unload. Open the cylinder, flip the gun up to 90° and pump the ejector rod and Mr gravity does the rest!

Drills are different for an LBR, particularly as you can’t use the normal 0/90 ‘fumble zone’ for loading and unloading an LBP. Why? Loading and unloading is done with the barrel up and down as I’ve explained. However, any revolver is rendered instantly safe as soon as the cylinder is opened, but that’s still no excuse to wave it around and out of the safety arcs! So, practice to get it right. An LBP is slightly different as the magazine has to be removed and the action locked open to show safe. Due to the build, it’s possible to do all this from the horizontal position.

One unpleasant aspect of any revolver is the mandatory cylinder/barrel gap, with firing gasses coming out sideways; called spitting. So, any two-handed grip needs to be hand-on-hand and not forward on the barrel. Equally’ do not wrap your supporting hand’s thumb over the top, as it could impede hammer movement.

Stance and sight acquisition is the same as the LBP, but don’t forget that you need to obtain a good consistent degree of ‘positive resistance’, locking fists against each other. Strong hand as high as you can on the grip punching out, with the weak hand ‘drawing in! Your arms should be tired after pistol shooting; they are doing the job of the rifle stock. Also, being a fullbore gun, you now have considerably more recoil to contend with too.

Both of these guns are well up for LBR practical disciplines. At the end of the day price and handling will be your deciding factors. The M66 is a bit lighter but the most expensive at £968.99. The ALFA is a bit heavier but cheaper at £787 (stainless) and £729 (blued), plus offers accessories - Adjustable Palm Shelf Target Grips at £88.33 and Weaver Scope Rail for £65.00. Speedloaders cost – HKS £11 and JET £19