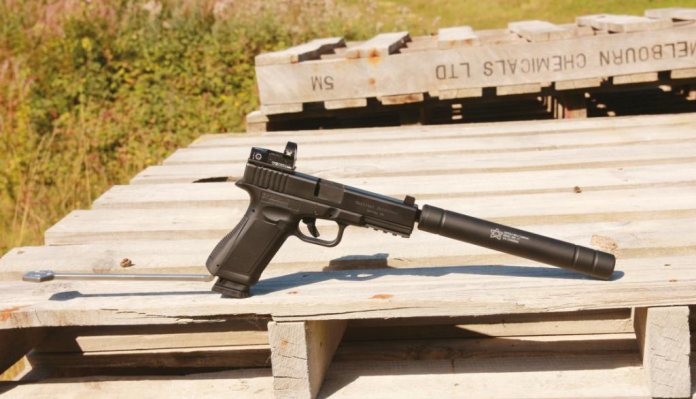 First of all Suffolk Rifle Co’s SRC17 LBP is not a Glock. Yes it looks like one but the dedicated 22 Long Rifle slide is made by Tactical Solutions as is the magazine and the frame is aluminium alloy and not polymer as the original.

From post handgun ban Britain the growth of pistol-like handguns started small with the legal requirement of a 12” barrel and 24” overall length conforming to a new Section 1 directive of a Large Firearm. However, it’s the 22 rimfire semi-autos that have taken off to become the preferred equipment today. The SRC17 adds to this choice that has mainly been filled by Colt 1911-types and others.

Without doubt the Glock-like lines of the SRC17 will endear it to many shooters old and new. I shot Glocks for many years pre-ban and loved the ‘drastic plastic’! It’s an unusual design as it has no manual safety like a 1911, with a trigger safety blade there to stop accidental operation only. Nor does it need one as it offers a sort of semi-double action (D/A) feel as it trips the striker, which makes for a rather long and mushy pull.

Real Glocks show a polymer grip frame with tiny, L-shaped steel rail sections the slide runs on. On first inspection it looks under engineered but in practice it works well. However the alloy frame of the SRC17 is aluminium with proper and larger integral rails. Like the modern Glock there’s an integral Picatinny rail in front of the trigger for lights and lasers.

Another change is to the steel slide as the main spring sits in a removable alloy bushing that fits into the nose of the slide. On the Glock the nose section is formed integral to retain the recoil spring and guide rod. The trigger mech etc. looks identical and I would guess these bits are bought-in.

Typically the barrel is 12.1” with a dummy moderator/shroud, which is the fashion! The muzzle is threaded ½ x 28 UNEF so you can fit a real moddy if you wish! Plus the mandatory extension rail (coat hanger or wrist brace) is at the rear to make up the mandatory 24.1” overall length. Regardless of the legal requirements; this class of handgun offers a lot of fun shooting and though I would not want one, I am gladdened that so many people do, and to a degree this sort of kit has both saved and resurrected handgun-type shooting and competition in the UK!

Controls are pretty basic, most notable is the fact the pistol does not use an external, drop hammer like a Colt 1911-type, being striker-fired instead! The mag catch is located on the left of the grip at the trigger guard junction and is a large, square, cross-bolt that is operated by the firing hand thumb. This control is quite large and is all too easily operated by accident, or in a holster that covers the button. It could do with being a bit shorter to avoid hiccups, or use a stronger spring! Directly above this is the manual bolt release catch, which automatically holds open after the last round; simple and easy.

The only other control is the stripping catch, which is a tiny ambi, pull-down plate about 1.5” forward of the slide release – more of that later. The trigger though offering a long and mushy pull that stacks up a bit towards the end is surprisingly light at around 4-5 lbs; certainly compared to my centrefire Glocks. Truth is the design is not known for their good triggers and it’s something you learn to live with! Though there are a number of after-market options available.

One original characteristic that the SRC17 retains is that rattley feel as the slide does move about a bit. I remember seeing my first Glock 17 (9mm) in 1984 and thinking what a pile of junk and being very surprised when it shot as well as it did and did not come apart! I am not sure what it is about them, but they just work and shoot beyond expectations. I would stick my neck out and say it’s probably the finest modern battle pistol ever made; not pretty but tough and reliable!

The wrist brace is a solid piece of stainless steel with a wide end that’s threaded so you could if you want add weight to improve balance; maybe not! You can also opt for aluminium instead. The front and back straps of the grip frame are heavily checked with the sides being textured. The slide has vertical retracting groves at the rear. Sights are basic with the standard Glock, polymer U-notch with white outline at the rear in a transverse dovetail for windage adjustment, up front is a low blade with a white dot (non-adjustable). They are adequate but a number of companies offers better, such as Trijicon.

This gun came with a high blade up front (to clear the moddy) and Suffolk Rifle fitted a Vortex Venom 3 MOA compact red dot at the rear on a universal base. I’m not a fan of red dots but on a pistol like this they make a lot of sense and would improve accuracy.

Feed is from a polymer magazine with a capacity of 10-rounds, which rather belies one of the Glocks original USPs of a high payload; the original Glock 17 held 17 rounds of 9mm! I was told a 15-shot is imminent and a 25-rounder is in development too. The sides of the mag are slotted and the follower has external, pull-down tabs which facilitates filling. The odd thing is the magazine protrudes out of the grip by ¾” and looks a bit messy!

Long barrel and coat hanger aside and perhaps because I was a Glock shooter I started warming to the SRC17 and it brought back fond and familiar memories. There’s also the possibility of a properly moderated version with a shorter barrel and fixed can to make up the 12”requirement.

As usual I assembled a good cross section of ammo, standard, match, high and ultra high velocity (HV) and even 22 subs just to see if it could handle this low powered loading. Some LBPs do and some don’t and that’s the way it is! On Suffolk Rifle’s website they state: “The only ammunition that we support is CCI Mini-Mag. You may use other ammunition but expect varied results. Like all rimfire pistols, low powered .22 will not cycle the slide so you should concentrate on high power, high velocity ammo.”

The gun was quite fussy about what it shot and did not like Winchester’s sub-sonic or their match-grade Xpert either. Nor did it like Remington’s Wildcat (ultra HV) and their HV, with these loads it stove-piped (case ejects and is caught by the slide as it goes forward) a lot. It was OK with the Mini-Mag and Winchester Laser (HV), but what it really liked was Fiocchi’s HV, which it ran very well, equally and surprisingly some old Mag Tech (CBC) standard round nose. But, and as with any rimfire semi-auto firearm, you just have to find the right load and you’re sorted! Plus I have always found that a running-in period can be required to get rid of the high spots.

Accuracy was good enough; off the bench at 25 yards you can expect 2-3” groups. On speed reloads where you palm the magazine into the grip then slide it off to make the weak hand grip, I found I was wiping off the lower plate so the spring popped out. Probably me being over aggressive on my reloading drills! But that’s what you get for 20-years off shooting Practical Pistol!

Taking the SRC17 down is a little different but very simple. Remove the magazine and dummy can and fire the action. Pull the slide back about ½” and hold it there while at the same time pull down on the stripping catch and hold it. Then just pull the slide/barrel forward and off the frame. Next and under control lift up the rear of the spring/guide rod assembly and remove it rearwards, the front bushing can be pulled back about ½” the lifted out too (note its position with the angled wings facing towards the muzzle. Finally with the slide base up (sights down) pull the barrel forward ¼” and lift the rear chamber section up then slide the whole thing rearwards. Reassemble in reverse order ensuring the spring/guide rod sits in the lower, semi-circular cut-out at the front of the chamber section. Re-engage the slide with the rails and push rearwards and you will see the stripping catch move up and down as it re engages and locks the barrel in place.