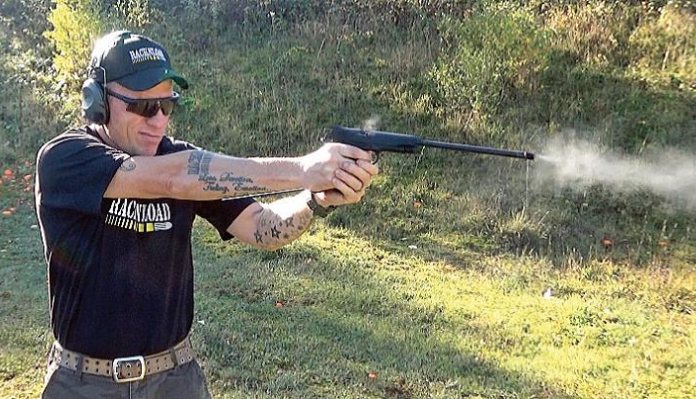 By far the most popular LBP .22lr here in the UK has to be the GSG 1911. I’ve owned one myself and they are great fun and, not only that, there is so much that you can do with a 1911 as far as customisation goes; if, of course, you are that way inclined! Not only that, but they do come in a variety of different colours to suit most tastes. But the GSGs are a little weighty for what they are and to be fair, there has never really been anything else out there for the 1911 fan, apart from the Tunnel Target Sports 1911s, which I personally haven’t seen much of in recent times. However, there is a new kid on the block! From Oceania Defence, I bring you the Colt Gold Cup Trophy from Walther! The first thing to strike me, when I handled one, is how lightweight it is and that can only mean one thing; felt recoil will bring a big smile to your face! Why this gun then and not a GSG for example? Nothing against GSG but this pistol is a little bit more refined and with that, a little more expensive, as to be expected.

Let me take you on a tour of the Gold Cup then and see what’s so good and maybe not so good about it, if anything. The ‘coat hanger’ then; well, it is pretty minimalistic, as it is just a plain bar, rather than like the GSG’s, where they have a bulb-like weight on the end; so, already, weight has been saved here, even if it is just a few ounces. Yes, unfortunately we have to put up with this bar sticking out of the rear of the gun, as per UK law but to be fair, it isn’t that noticeable when holding the pistol.

The grips are much better in my opinion than normal 1911 pistol grips, as these ones are wrapped around the front too, rather than just panels on either side. They are rubberised and offer plenty of grip but also look loads better and fatten up the pistol grip too; so, if you have bigger than average hands, then I think you will find it more comfortable in the hand. The grip safety or ‘beavertail’ grip safety works just like on a conventional 1911, as you would expect, as well as the usual frame mounted safety catch on the slide, although on the Trophy it is not ambidextrous and is just located on the left-hand side.

All other controls, such as the mag release, are in the usual 1911 locations! The trigger is single action, as you would expect, as this is a 1911 after all. As you can see, it is ‘skeletonised’, with holes in it and not only does it look great, but it shaves a little bit more weight off the gun. It broke crisply on my trigger pull scale at just over five-pounds.

Setting your sights The sights are good, with the rear being fully adjustable for windage and elevation, with the front being a dovetailed adjustable type. Tools are provided with the firearm to adjust the rear sight and a hex key can be used to adjust the front sight. The sights on the pistol are plain black and feature no dots or illumination, which is a bit of a shame. I think maybe a white dot on them would make target acquisition faster; for me, at least! Otherwise, the sights work very well.

Apparently, the aluminium slide is less prone to wear, unlike the GSG’s and is actually lighter in weight too but to be honest, the main weight of the pistol comes from the extra long UK legal barrel and the heavy zinc alloy frame. The diagonal slide serrations are limited to the rear of the slide, as per the traditional 1911 look, but are very tactile and easy to engage, even with sweaty hands. On the left-hand side is ‘COLT GOLD CUP TROPHY’ that has been laser engraved.

The barrel is 300mm long and has a barrel twist rate of 1 in 13 3/4-inches and has six grooves. It is externally threaded to take a barrel shroud but this is an optional extra. There is also the option of having an integrally suppressed barrel too, which is basically a ported barrel with a barrel shroud. I have used one of Oceania Defence’s Walther PPQs that had this type of suppression and I can tell you that it is really quite effective, although a little dirty when you remove the shroud for cleaning!

The magazines hold twelve rounds and are steel in construction with a load assist button that you can pull down to aid loading. This button needs a bit of grip on it, as I found it a little slippy when loading, especially if you are loading them up with waxy ammo.

Down range, this thing performed really well. I ran some high velocity CCI Mini-Mags through it, as well as some lowvelocity SK standards and, after around 300 rounds, I could not report any issues at all; it ran 100%! Accuracy-wise, the gun was on the money, I was nailing a six-inch steel gong at 25-yards with almost every single shot (notice I said almost, this is me shooting don’t forget!) Handling of the gun felt nice and operation and loading were a joy. Felt recoil is definitely more noticeable than when shooting a GSG, what with the Trophy being quite a bit lighter. Ejection of spent brass was positive, with cases being thrown up and far to the right, so hopefully no need to worry about hot brass going down your T-shirt!

Overall, I think the pistol will do really well, especially for those that fancy a 1911 but one that’s a bit different to a GSG. The Trophy is well built and pretty damn accurate, even with me behind the trigger. My only gripe with this pistol is that it doesn’t come with a barrel shroud as standard and I really think it should, as it would look so much better with one.