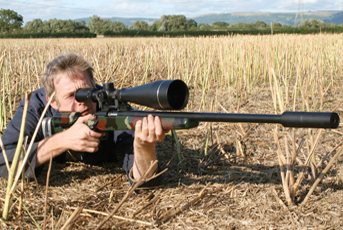 There is a finite size of cartridge or case capacity that a .20 calibre barrel can cope with, in other words there gets to a point where you just cannot burn a higher powder charge without causing pressure problems. My own creation the .20 Satan based on the 6mm Swiss Match and Lapua 6.5mm x47 case is as large as you want to go but the .20 BR (Bench Rest) cartridge is a good alternative.

The .20 BR is based on the excellent 6mm BR case either Norma or Lapua in make. I use Lapua and the brass quality is why the conversion to .20 calibre is worth it. I love wildcatting but unless you have a good parent case often the outcome can be a disappointment. Not so here, a few simple manipulations and attention to neck sizes and chamber dimensions and you will have yourself a superb vermin cartridge.

As with all wildcats you can specify the chamber dimensions of your barrel which thus determines the size of your cartridge measurements, in particular the neck diameter. If you do not want to neck turn your brass then I would specify a 0.237” neck as a loaded round has an outside neck diameter of 0.235”, thus allowing a thousandth of an inch clearance either side. Alternatively you could go to a 0.235 or even a 0.232” and then turn the neck to create perfectly fitting rounds, it’s up to you.

If you have a 0.237” neck proceed as follows. Lightly lube the 6mm BR brass with Imperial sizing wax (Royal case and die lube also good) and run it through the .22 BR, full-length reloading die with the expander ball removed. I then trim to 1.535” minimal length with a Wilson case trimmer and then further reduce the neck dimensions by running the brass through a .20 BR full die, making sure that before-hand it is deburred and lubed.

I then expand or uniform the neck internally using a 0.204 or 0.2035” expander mandrel in a Sinclair tool and then check for overall length and uniformity. Usually I will slightly neck turn at this stage just to remove any imperfections that have come to the surface when resizing, literally a light tickle as they say. That’s it… ready to befire formed prior to load development.

There are definitely two ways to look at the .20 BR, people either want it to shoot lighter bullets fast, which necessitates slower twist rate rifling, 1 in 12 to stabilise the bullets and not cause too much pressure from the heightened velocities. Or if you are like me and enjoy ultra long range varminting, then the Berger bullets of 50 and 55-grain will require a faster 1 in 9 minimum twist , 1 in 8.5 or better still 1 in 8. With the heavier bullets is where you see the greatest potential for the .20 BR round as the load density and powder used is better suited to this task.

Light bullets usually consist of 30 to 45-grains that can be pushed from 3800 to 4400 fps dependent on powder and barrel length used and are really used for vermin control where you want rapid expansion. This has the benfit of not only lethal and humane results but make the 20 very safe as the bullets can be very frangible. Some expand better than others and terminal velocity plays a big part here, some of the Bergers have a tougher jacket and expand less rapidly than say the Blitz King!

Only Berger make bullets of 50 and 55-grains and it is their large ballistic coeficients that really is what us varminters savour as this translates into excellent down range potential. I have used larger specialised designs and other lighter projectiles from Lawrence and Unmissig but these are hard to source, and I’ve even played with lathe turned bullets! (See table overleaf)

I have shot many .20 BR rifles over the years in varying cofigurations and barrel twists. All provided me with cofidence for correct shot placement primarily due to the flat trajectory, velocity and good ballistic coeficient (BC) the .204 bullets give you. Crows and rabbits are humanely dispatched and foxes that seem out of range regret their bravado when a 4000 fps 40-grain V-Max is sent on its way!

You also have a huge rotational force from the gyroscopic spin of the bullet but be careful not to push these small pills too fast otherwise they can and will, literally come apart in flight and not reach their target.

Especially with the heavy weight bullets the .20 BR really starts to make sense as a long range vermin tool. It is relatively easy to form the cases, is frugal on powder considering the benfits reaped from the pure ballistics. The only real down side is throat erosion in the barrel can be greater than larger slower centrfire vermin rounds. My tip is to do your minimal load development to get a good accurate load for your rifle and then do not get the barrel too hot from repeated firings. Getting a magazine to feed a short stubby BR case is a fiddle but can be done! For me the .20 BR is a very practical long range cartridge especially with the faster twist barrel.

Be very careful when reloading as dependent on chamber dimensions, bullet seating depth and barrel dimensions make a huge difference in velocity and pressure.  Start 3-grains below maximum and work up and then you can determine the limit for your rifle and then start to enjoy some laser flat ballistics and unerring accuracy. GM