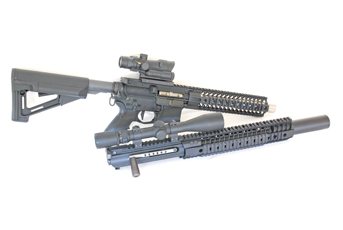 I have tested 300 Whisper moderated rifles based on AR15 chassis from Bradley Arms and North West Custom Parts (NWCP) before. The latter was a fully moderated build! They shot well enough given the right ammo, but I found both far too expensive for what is a highly specific calibre.

The 300 Whisper was built as sub-sonic sniper round with a possible effective ceiling of around 150-yards. It works with the right ammo but for we sports shooters it’s really only good for short range foxing or equally close distance small deer (with the correct bullet weight, type and velocity). To make it near as quiet as a 22 sub-sonic, which is possible you need to be firing big, slow-moving (200-grain plus) bullets at around the required 1000 fps. The problem here is finding something that will expand reliably at these slower speeds. As if it don’t mushroom even if a soft tip etc then there’s no guarantee of a quick and humane kill! To be frank I’m not a fan, as I can see little point in it!

However that’s not to say it does not have an appeal, as it’s all the rage in the US at the moment with the introduction of the 300 AAC Blackout, which is identical and interchangeable with the original 300 Whisper. American ammunition companies offer it in a number of options with light and heavy bullets. Trouble is for true sub-sonic effect you need the aforementioned heavy pill that will require a tight, normally 1-7” rifling twist to stabilise it. Lighter weights can produce around 2300 fps, which are more suited to general hunting do not shoot well with this spin rate and don’t moderate so efficiently either. So you have to make the call!

Wayne Titterton of NWCP is a definite Whisper fan and soon after his fully moderated AR he was talking about doing a more budget, single shot gun. Well £2k + for a short range and highly specific AR15 is a bit of a sticking point. He has certainly achieved this goal with the AAC Handi Rifle, which will not break the bank at sub £500 and should attract those who have always fancied a Whisper but not the price tag.

The gun is based on the Harrington & Richardson Topper, single, break-barrel shotgun, which over the years has morphed into rifle-types and other smooth bore calibres. Now offered by AAC the Handi Rifle lives up to its name as it’s tiny! With its 16.5” barrel it pushes the tape to just 29.5” overall. Equally the black, synthetic furniture is compact, with the length of pull (LOP) being a minute 12”. OK I’m a big, long armed bugger, but the recoil pad came up 3.5” short for me! There are QD sling studs front and rear too.

The mid-weight barrel is cut for 1-7” twist rifling to suit the heavy sub-sonics and threaded 5/8” x 24 TPI for a moddy. No sights are fitted though a Picatinny rail is screwed onto the barrel re-enforce for scope mounting. All metal work is finished in a black/grey phosphate-type flat finish. The action is simple with an external hammer with rising connecter plate providing a modicum of safety. This only rises when the trigger is pressed so connecting the hammer face with the tail of the firing pin. Opening is by a press-down lever to the right of the hammer, as the barrel opens and comes to rest it operates an extract-only claw at 6 o’clock, so the case needs to be removed by hand.

Getting the Handi Rifle ready for shooting revealed a number of areas that need to be addressed. First and most important is the position of the scope as if the eyepiece bell sits over the hammer you can’t cock it or will have problems cocking it. This then requires high or reach-forward mounts, a problem that could be easily solved with a 90° hammer spur extension like Marlin offers on all their lever-actions! I opted for a Warne R.A.M.P. base with integral rings for my Leupold 4.5-14x50 LRT.

The mandatory high and or more forward positioning of the scope causes you to crank your neck forwards and breaks your stock weld to a degree. This also throws out your shooting arm/hand too. I’m not being picky for the sake of it, but that short butt does not do us long armed shooters any favours! The option of a longer LOP and higher comb would greatly improve handling.

Up front I fitted a .30” cal (7.7mm) aimZonic Plus, muzzle-mounted moddy. This proved ideal as importers Alan Rhone simply cut me the correct 5/8” x 24 thread adaptor, as opposed to having to source a rather specific moderator. Ammo went to Hornady’s 110-grain V-MAX in 300 Whisper and Remington 125-grain BTHP 300 AAC Blackout. Based on a necked-up 223 Rem the shoulder is vestigial and the bullet really dwarfs the case.

I was not expecting a lot from these two lighter bullets given the rifling twist, so cast around for a suitable alternative for reloading. Hodgdon recommends a 220-grain Sierra Hollow Point Boat Tail (Match King), which I did not have, instead substituted at the same weight their Round Nose Soft Point Game King, pushed by 9-grains (maximum) of Hodgdon Lil’Gun. I use these in my 30-06 as a big game thumper, so putting this massive pill into that tiny case looked odd.

Trigger pull was much better than expected with a reasonably crisp, but film 4-5 lb break. As I surmised neither the 110 V-MAX nor 125 BTHP shot consistently with spotty groups at 100-yards that ranged from 1 – 4” depending, so indicating weight/rifling twist incompatibility. Switching to the 220-grain reload the Handi Rifle settled down to shooting about an inch, not bad. Over the chrono it was averaging 1003 fps, which translates to 507 ft/lbs, so not even small deer legal. However very quiet and much like firing a large 22 sub-sonic with a dull thud of a report.

Putting the 110-grain V-MAX over the chrono showed an average speed of 2385 fps and a corresponding energy of 1389 ft/ lbs, so eminently small deer legal. The 125-grain Remington though not an expanding bullet puts out 2215 fps/1372 ft/ lbs, so not a problem finding an expander in that weight either. However, both would need a twist rate to suit. The aimZonic Plus handled all loads easily and even the supersonics moderated well!

Bit of a dilemma really, you can get a well moderated and compact centrefire with the heavy bullet loading that is only good for foxes (short range at that). Or go with a lighter, noisier and faster pill to shoot small deer and foxes, but there are plenty of normal guns that can do that and a whole lot more besides. The 300 Whisper or AAC Blackout remains what it is - a short range sniper round with limited application for our sporting market!

The rifle, well utilitarian but it works, with an acceptable trigger too, and accurate enough with the right bullets. The manual extraction of the fired case makes a follow up shot if required slow, also, with gloves on, good luck on getting the empty out. Generally it needs a more normal length butt and a hammer spur. The big attraction is it offers those interested in 300 Whisper a cheap and accurate entry level option.