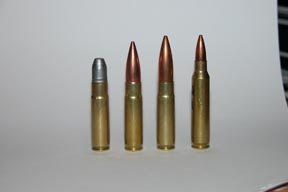 Though I rate and use the Southern Gun Co (SGC) AR15 Speedmaster rifles, it’s also nice to see what else is out there, as there are a few smiths who are also building some interesting examples of the black rifle. One such person is Mark Bradley, who is a PR, Service and High Power shooter and like yours truly - an AR15 nut… A few years ago he got his RFD and started offering his own ARs. Nothing particularly ground breaking just straight-pulls in the usual formats, with all the good ‘go faster’ bits and side cocking actions.

Being a one man band Mark is always pushed in terms of having a spare rifle for gun testing. But he finally came through with a most interesting and unusual adaptation that will suit Gallery/short range users, as this little M4 carbine is chambered in the rather exotic 300 Whisper. In this case and in my opinion it’s the calibre that’s really interesting, though as ever it proves the build versatility of the generic AR15 in that you can adapt the action for almost any cartridge.

The rifle follows the M4 Carbine build with a collapsing stock in this case from MagPul Industries Corp, and a 4-way forend that fully floats the heavy 13” stainless barrel. The upper receiver is a flat-top with an integral, fold-down, left hand cocking handle and a right hand conversion too. Mark told me he’s not a fan of ambi cocking ARs and feels the right side lever is enough, however if you want that facility just ask. Up front is the standard AR A-frame front sight and if you want to go ‘all-iron’ then D-handles are available.

Without doubt the M4 layout is by far the most popular these days, though in 223 Rem the short 14 ½” barrels do lose you a bit of velocity. However, the speed and capacity potential of the design does lend itself to other disciplines where maximum range is perhaps not so important, if you can find the right calibre.

A few years ago SGC offered their lever-action Speedmasters in both 9mm Parabellum and also 30 Carbine (LA9 and LA30). Both cartridges use a near identical case head, so allowing the use of the standard 223 bolt face and this is what Mark has done with his rifle, only he has picked the 300 Whisper.

The 300 Whisper was designed by J.D. Jones as a true sub-sonic sniper round that would be effective up to 200 yards +. It could use most weights of standard .30” cal bullets that could be driven at below the speed of sound, so making a true silenced weapon. The base case used the 221 Fireball, but these days you can also use 222 or 223 Rem brass, which from our point of view is easier to get. I have to say the round does look a bit odd with the tiny case and big bullet on top.

Being based around a 223 the Whisper can be used in a standard AR15 platform, with just an upper receiver change being required. So if you appreciate what the AR has to offer, you can turn it into a Gallery rifle easily, as the ballistics of the Whisper fit into the criteria required. This strikes me as a good idea and also a lot easier to achieve than the SGC LA system and I always wonder why they never offered straight pull 30 Carbine gun for that purpose?

For short range PR/Service use say 100 – 300 yards the Whisper would probably make a useful alternative to either the 223 Rem or 308 Win. For Gallery events it might be better than the standard 38 Spl, 357 Magnum etc; especially at longer ranges. But in its sub-sonic form it does offer an exceptionally low signature as I discovered and it could be useful as a fox cartridge, given you can get the bullets to expand reliably…

These figures are from the Sierra manual who used a 10”, Thompson Center Contender pistol to gather the data. Mark supplied a good selection of reloads for me to use and that perhaps is the only down side to this calibre, as you are going to have to reload for it. If you are into reloading, this is fine, but if not then it might put you off. As can be seen the 300 Whisper case has to have the neck enlarged considerably to accept the new diameter bullet. Though a good combination I would say that this gun is very much for the dedicated enthusiast, who is prepared to put the effort in…

The rifle came supplied with an Aim Point red dot scope and a rather nice NV monocular in a special QD mount. The chances are the former would be used for most Gallery work and the latter as part of a night shooting set up, as Mark also supplied an ASE UTRA Compact moderator as well as the standard AR muzzle brake. But I wanted to see what the Whisper could do so I put my 3-9x50 Leupold Custom Shop on top. The trigger was good, showing a crisp, single stage break of about 2 lbs and I was looking forward to see what this combo might offer…

The standard 223, AR15 magazine will take the Whisper cartridge without modification, which is useful, and it will load to the same capacity too. Powder charges are modest, as in most cases weights are around 10-20 grains given what you are trying to achieve using propellants like Alliant 2400, Vit N110 and H 110. Plus the marginal bottleneck case form offers good primary extraction and the straight-pull action is smooth and easy.

Ammo went to three loads - 158-grain lead truncated cone (T/C), 144-grain FMJ and 240-grain Sierra boat tail hollow point Match Kings (SMK), these last being the sub-sonic recipe. First up the SMKs with the moderator fitted. The lack of recognisable noise was amazing; the firing signature was like the action of a 22 semi-auto with its mechanical slap noise. That’s all you heard apart from the ‘smack’ as the bullet hit down range. The lead and FMJ were similar though a bit louder.

With the moddy off the Whisper feels a bit jumpy, as you are after all throwing some heavy bullets through a light rifle. Accuracy was acceptable but not amazing, the best load was by far the 144 FMJ, which at 100 yards came in around 1.75”. The sub-sonic printed about 2” and the lead… well I found it strung up the target, despite the good trigger and supported position.

My gut feeling is that the barrel is too short and maybe more bullet weights need to be brought into the equation and rifling twist needs careful consideration too. The best performance was with the lightest 144-grainers, so maybe something between 110-130-grains might show some improvement. However sub-sonic use aside and in fairness - at 50 yards the rifle should be capable of an inch and even out at 300 a good shot should be able to keep it all inside 6”. Though I would imagine at the latter distance wind would be a highly critical factor.

If you are considering the 300 Whisper and I reckon for gallery/short range PR type work it’s a nice little round; one important aspect is the cartridge overall length (COL). The lead bullet load’s COL was only 1.830” as compared to the standard length of 2.245” with the jacketed loads. In this light/short rifle firing without the moderator fitted caused a lot of feed problems, as the ammunition is literally thrown front to back in the magazine. However, fitting the moddy added extra weight, which stopped this happening. For range use I’d want a heavy 16” barrel just to put the weight up. No problems with feed with the other two loads though.

If you own an AR15 then a 300 Whisper conversion does offer a lot more diverse uses, but be prepared to reload for it, as you have no other option…