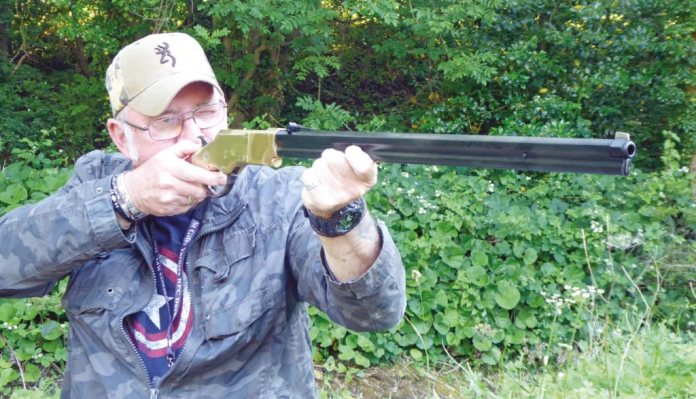 The earliest lever-action repeaters were the brainchild of Walter Hunt (1796- 1859) who also invented the safety pin. At the beginning of the American/Mexico war of 1846, Hunt theorised that if he made a weapon that was an improvement on what was already in use by the American forces, then its superiority would shorten the conflict and save lives.

Hunt’s invention, the Volition rifle, used a hollow lead bullet with a powder charge in its base, known as ‘rocket ball ’, ammunition, which was ignited by a separate primer. It is unlikely that any guns were made, other than the patent model, before Hunt began his association with Lewis Jennings, and the pair set about improving the Volition. Jennings was subsequently connected with Horace Smith, of Smith & Wesson fame, and the Smith-Jennings repeater was born, still utilising the Hunt rocket ball ammunition. Ammunition proved to be the weak point in its development and by 1852 Hunt and Jennings have disappeared from the scene.

The partnership of Horace Smith and Daniel Wesson set about designing a self-contained cartridge, based on the French Flobert ammunition, and a magazine firearm to use it. They were subsequently granted patents for a lever- action repeating pistol and copper-cased cartridges. The pistol was put into production, and the rocket ball ammunition retained. The partnership lasted for little more than a year, when lack of finance, due to poor sales, forced them to reorganise, with new financial backers, as the Volcanic Repeating Arms Company. The name ‘Volcanic’ had been given to their repeating pistol in a magazine article. One of the new stockholders was Oliver Fisher Winchester, a successful shirt manufacturer from New Haven, Connecticut.

By 1857, Volcanic was declared insolvent and Winchester was assigned the assets by the court. He quickly reorganised again as the New Haven Arms Company and retained the name ‘Volcanic’ for marketing their products. The weak link in the chain was the old, unreliable ammunition design and, by early 1861, bankruptcy was staring them in the face. Fortunately, their shop superintendent, Benjamin Tyler Henry, had been assigned the job of coming up with better ammunition, while improving the mechanism of the guns. In October 1860, he had been granted a patent for the improved firearm using a .44 rimfire, self-contained, metallic cartridge. The Henry rifle would be the saviour of the New Haven Arms Company and prove the foundation for the Winchester Repeating Arms Company, which was formed a few years later. It had been a long and arduous road from Hunt’s first attempts at a repeater to the birth of the successful lever-action rifle, a creation peculiar to the North American continent.

I’m not sure what it is about this Henry, with its quirky loading style, that attracts me. Maybe it’s just that, its odd magazine system; or perhaps the clean lines or the minds that came up with a combined barrel and magazine tube when separate parts would have been easier and cheaper to produce. Uberti have done a great job in recreating this firearms icon, with today’s machinery obviously making the task a little easier than it was 160 years ago.

At 9¼lbs, the Henry is quite a heavy rifle, over one pound heavier than a Winchester 1873, with the same barrel length and calibre. The 24¼” barrel and magazine assembly have a deep black finish and good sharp edges. The hammer and lever are case coloured with the receiver and crescent butt plate being brass. The receiver has a protective plastic film on both sides on delivery and needs a polish when this is removed. There is the option of having an all-steel version, the frame with case colours, or left in te white, and both versions can have white or black barrels. This example has a nice piece of walnut with the standard Uberti gloss fi nish and the edges stand slightly proud at the junctions with the receiver.

The authentic rear ladder sight is marked up to 800 yards, optimistic for this calibre and even more so with the original .44 rimfire cartridge. The base is dovetailed into the barrel fl at, making lateral adjustment possible. The front sight is a fixed, white metal blade on a collar around the muzzle. This version has a swivel stud on the bottom tang, which locates with a spur on the lever to lock it in place, an arrangement not found on the steel-framed models. There is no trigger block safety, this feature was first introduced on the Model 1873. The toggle-link mechanism on these brassframed rifles is considered to be weaker than later models, such as Winchester’s 1892 or 1894, a consideration when choosing the calibres available. There are no magnum chamberings available for the Henry; it’s only available in .44-40 WCF and .45 Colt. The steel-framed Model 1873, which shares this mechanism, is available in .357 Magnum but not .44 Magnum. The last of the toggle links, the model 1876, is a heavier action, but back in the day was not considered strong enough the handle the .45-70 Government cartridge.

Loading the Henry is a little different to the more normal lever-actions that have a gate on the right side of the frame. The magazine, integral with the barrel, has a coil spring inside and a slot running the full length of its underside. At the breech end of the spring is a brass follower with external lug, which rides in the slot. Turn the rifle upside down, so that the slot is uppermost. Grasp the lug and push it as far as it will go towards the muzzle. This will compress the spring. When it’s as far as it will go, turn it to your left and let go. A small screw on the outside of the magazine tube prevents it from returning. A word of warning here: the corners of the slot can be extremely sharp. I usually take a small file and round these off on my own rifles. A consequence of this feed system is the fact that there’s no forend, so watch out as you’ll be holding hot steel soon enough.

Next, with the barrel just above horizontal, slide the ammo, base-first into the magazine. Do not hold the barrel vertical and drop the cartridges in, as if the primers are not seated fully you run the risk of it detonating, as the base of the round above slams into the tip of the bullet below! Here, it’s best to use flat-nosed bullets. When full, carefully push the button slightly towards the muzzle, turn it to the right until it lines up with the slot, and GENTLY lower it into place. There have been a couple of instances where the button has been allowed to go under the pressure of the spring resulting in a discharge in the magazine, probably down to a primer being proud of the case. You are now ready. Each full operation of the lever allows the next cartridge to enter the lifter and the follower will move rearwards. Be aware of this when you are shooting, so that your hand does not obstruct it, not too bad when plinking but could be costly in a stage against the clock.

As near as it gets

It is obviously not possible to get a completely authentic copy of the Henry, as the original used a .44 rimfire cartridge. Of the two chamberings available, the .44-40 WCF is as close as you can get. The .45 Colt was never chambered in the rifle in its day, being introduced in long guns to satisfy the demands of Cowboy Action Shooters (CAS) stateside, who wanted a rifle/pistol combination in the same calibre and whose favourite revolver cartridge was the .45.

A lot of my lever-action rifle shooting is done on a 25-metre indoor range, so I need to load ammunition that is within the range limits. For the .44-40, I use a 200-grain RNFP lead bullet over 7-grains of Unique powder. To take it outdoors to 100 yards, I will bump this up to 8.5 or 9-grains of the same. Recoil with either load is very manageable with the lighter one being quite accurate at the shorter range. For the distances encountered at CAS shoots, this one will probably do the job adequately. The heavier load results in slightly cleaner cases, as obturation is improved.

For CAS shooters wanting something a bit more manageable, there is an 18” trapper version, which comes in at 1 ¼ lbs lighter, but still has a magazine capacity of nine. Re-enactors wishing to portray a particular impression may be interested in the ‘military’ option, which has rings on the left side of the butt and the barrel to take a sling.

Finally, I know there are going to be more than a few out there saying £1200? Wow, that’s a lot of money! Well, let me tell you, this is a lot of gun, guaranteed to make you new friends on the range. Also, bear in mind that the American Henry company also makes this model, and the recommended price on theirs is around £2300.00. I have been around these Uberti Henry rifles for a long time and there is no way that anyone can make a version that is twice as good.