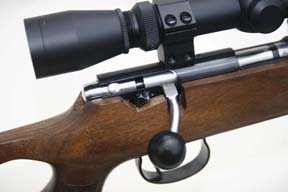 In my youth Anschütz was the name in 22 Rimfire rifles and the one most of us aspired to. With their legendary build quality, accuracy, and fantastic trigger, they were quite some guns, however so was the price. Then a couple of years ago they came up with a sporting version of their Model 64 target rifle that brought this legendary performance within easier reach. Called the 1417 G Classic carbine and chambered in 22LR, with its stout little 14” threaded barrel it made for a compact, reliable and most accurate vermin tool. With the advent of Hornady’s 17HMR cartridge, Anschütz then offered the Model 54-based 1717DB. This full size, heavy barrelled gun was a most capable shooter with best recorded groups going to ¼”. However, at just under £1000 it was far too expensive for most of us and the flag-type safety catch was less than practical in the field.

Moving fractionally down market their 1517DB strikes a good compromise between price and ability. Based on the Model 64 target action it shows a medium/heavy 18” barrel and is available with a standard stock or a walnut thumbhole version, which is a real beauty. The rifle comes with QD sling swivels and studs, so there’s no problem in fitting a bipod. The RRP is £750, not cheap, but certainly affordable if you are looking for something a bit special. I found several retailers selling it between £630 and £650. This puts it firmly in the ballpark alongside guns like Ruger’s M77/17 All-Weather.

The level of detail is immediately apparent even from the butt pad. This is made from several different materials. There are two rubber grip sections at the toe and heel so it doesn’t slip if you stand it up in a corner. The majority of the rest of the pad is stippled but is not grippy, so it goes in and out of the shoulder without snagging - a build feature found more on sporting shotguns.

Moving forward the stock is a simple piece of walnut with the grain well aligned for strength. The cheek-piece is quite large and provides plenty of options for a comfortable head position. There is a definite cast to the woodwork, which helps bring the rifle naturally in line with the shooter’s eye. The length of pull is 13.75” but feels shorter with the vertical pistol grip allowing a more natural hand position.

I have quite large hands and find only the most skeletal of thumbhole grips will suit me. However, the 1517’s fit was snug but surprisingly comfortable, which allowed good trigger control. The wood is chequered to improve grip in a skip-a-line pattern, which is a little different from that found on the 22 Rimfire model. Typically the action drops straight into the stock with no attempt at bedding. With Rimfires in general this is the way it’s done and seems not to affect accuracy at all - well certainly not in this case.

In function the trigger unit is a peach; single stage, fully adjustable and crisp with a ribbed medium width blade. The weight can be adjusted from 2 - 4.4 lbs, but comes factory-set at 2.5 lbs. The safety consists of a rolling lever, rear right of the action that pushes forward to FIRE and reverses for SAFE. Sensibly it allows bolt operation even when set to SAFE.

As with most Rimfires, bolt locking is basic; the squared section of the operating handle engages with a slot in the receiver. Up front is a non-rotating head with twin extractors with a gas escape groove in the bolt face. The mechanism can be dismantled in the field without tools, though why you would want to is a mystery to me! The bolt lever is long offering a smooth and easy movement. This is aided by a synthetic ball end knob, which makes it easy to palm it open or closed, and not too cold to the touch either.

The receiver shows both a dovetail and threaded holes for scope mounting. The chances are you will go with the former (as I did), as it doesn’t require bases, just rings with suitable ½” claw mounts. The action cycles smoothly, which I attribute to the bolt being supported for two thirds of its length at any time of its travel. This means that it aligns and locks up consistently providing a good foundation for accuracy.

In 17HMR the magazine capacity is only four rounds, so a spare or two is essential. This to my mind is on the low side, certainly in comparison with guns like the Ruger 77/17, which offers nine as standard. The mag is steel with a plastic base and a stainless follower, and it sits flush to the underside of the stock. The release catch is situated in front of the trigger, and it must be kept depressed constantly during removal or the magazine will not slide freely from the well. Nitpicking perhaps, but on such a classy rifle as this the feed system does appear a little basic.

Now to the heart of the matter - the barrel. This 18” Olympic match grade unit shows eight lands and a 1-9” rifling twist. It has a medium/heavy profile tapering from 0.86” to 0.752” at the muzzle. Threaded ½” x 20 UNF for a moderator, this section is counter bored so forms a hollow tube at the muzzle. It’s certainly different, as all other Rimfires maintain the rifling and simply thread the exterior barrel wall. Apart from giving the muzzle crown the ultimate in protection, I can’t see why Anschütz have taken this route. The rifle arrived boxed with its test target, fired at 55 yards, so I was confident that the 1517 would not disapoint.

As always with my 17HMRs I set up for a 100 yard zero. Ammo went to three brands and two bullet weights – Hornady 20-grain XTP and 17-grain V-MAX, CCI 20-grain hollow point and Federal 17-grain, which also appears to be a V-MAX.

Of the two 20-grain loadings the CCI was the most accurate but a little slower than the Hornady. With the 17-grainers there was little to choose from with perhaps a slight edge going to Hornady from an accuracy point of view.

All in all the CCI 20-grain shot the most consistently, turning in a succession of groups from ½” - ¾”, with the larger being put down to the odd breath of wind on an otherwise still day. Taking into account the small average group size - the largest being only 7/8” across all types of ammunition tested - this Anschütz would appear to be a seriously accurate little tool.

Unfortunately, out and out accuracy - while being an important ingredient - is not the be all and end all for a hunting rifle. Cutting to the chase, I have two complaints about this little gun. Firstly the magazine; the first round often hung up on the back of the chamber. Altering the angle of the follower so that it fed properly on the first round causes problems with the last cartridge stove-piping (flicking up) and jamming the action. Eventually I solved the issue but there is a fine balance on setting the feed angle. Now having found the right angle for the follower, it performs flawlessly. May be when I receive the spare magazine I’ve ordered, I will discover that it was just a one off. On that front, at £45 each, spare magazines are not cheap and not the sort of thing you would want to lose.

Number two on the list is the bolt. There is no doubt that the safety catch on the Model 64 is more practical for a scoped hunting rifle than the Mauser-style flag of the Model 54. However there should - in my opinion - be a third position that locks the bolt and sear. In the field it is all too easy to knock open the action and lose the chambered round… ironically this is due to the mechanism being so smooth and slick. The ability to lock the action would alleviate this problem.

Short of these two issues the only thing I may do (more for peace of mind than practical difference) would be to bed the action. In fairness, the performance out of the box means that the only possible benefit would be to stop long term point of impact shift due to wood movement. In truth this should probably come under the banner of custom work rather than factory supplied.

OK, so what did I think? Well it’s a great little rifle! My comments as to the feed might just be that particular magazine and though I feel strongly about a third safety position, you might not. With that in mind the 1517DB is a slick and accurate shooter and that thumbhole stock is to die for. Add to this the fact that the gun comes factory threaded for a moderator, and the compactness of the over all package, and you have a winner.

So if you’re looking for a 17HMR rifle what else is available around the price point and ability of the Anschütz 1517DB? The new Savage 93R17BTVS offers a thumbhole laminate stock, a heavy stainless barrel and their new AccuTrigger. Ruger’s 77/17 series is good with the heavy barrelled All-Weather being the best bet and its standard 9-round capacity is well worth a second look. The Sako Quad offers the HMR option as well as the other Rimfire calibres in a switch barrel design. CZ’s 452 is available in a Varmint format in this calibre and we also have the largely unknown Weihrauch HW60J and the Marlin Model 917VSF.

The Savage and the Marlin are similar guns, but the new 93R17BTVS with its laminate thumbhole stock and AccuTrigger system really does make it a whole lot more shootable, and for that matter attractive, at around £500. The 917VSF (£400 ballpark) shows a grey laminate stock and stainless barrelled action. Not quite as pretty but still a good shooter with the added advantage of both four and seven round magazines.

The Ruger needs little introduction and continues to be a good contender in the upper middle 17HMR bracket. Their All-Weather (£600) has a grey laminate stock and Target Grey metal finish with a slightly heavier barrel than the standard 77/17. It suffers a little from a heavy trigger, which can be easily replaced, though it adds to the cost. The barrel change system is fast and easy, and with the amount of after market tubes available you can really make the gun shoot. Although saying that, the Editor’s All-Weather will hold ½”- ¾” at 100 yards all day, and the only thing he has done to it is put in a new trigger and had the barrel cut to 20 ½”.

Another flexible option is the Sako with its interchangeable barrel/calibre options. Having had some experience of the Quad, I can honestly say that I would buy one soley on its accuracy and trigger alone, never mind the additional flexibility of calibre changes. It’s just a great performer and close to the consistency of the Anschütz. For a single calibre only, this one comes in at £550.

The CZ 452 was my first 17HMR and I believe still represents the best value, costing in the region of £350 with plenty of upgrade options currently available. As for the Weihrauch HW60 J, you can pick these up for around the £500 mark and its build quality is very close to the Anschütz. My only reservations are that the trigger is not quite as good, the barrel is too long and the gun is noticeably heavier than the rest of the field. Having said this, it is still well worth a look if your taste is more traditional.