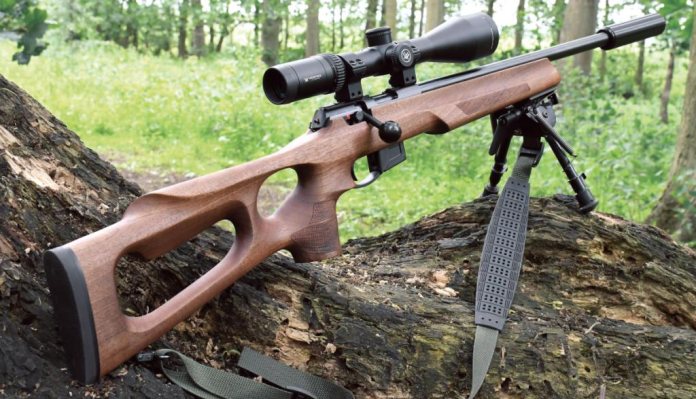 The new 1671 is available in 18- or 20-inch barrel formats with either conventional sporting furniture in Walnut, or the Thumbhole version seen here. This barrel is 19.2mm in diameter throughout its whole 18-inch/457mm length. The ½-inch UNF threaded muzzle shows a recessed crown, a feature generally only seen on Anschutz rimfires. This is an assured way to protect that critical last surface of the barrel that will ever contact the bullet from any mechanical damage but be sure to wipe it clean so no moisture or other nasties might cause corrosion long term.

A deeply blued sheen coats the steel and has resisted corrosion when used in light rain that we have so commonly seen this spring with aplomb. Well matched Blue colouration continues the matt action itself with 11mm dovetails machined into the upper surface of the steel receiver, just a 37mm gap for the ejection port to interrupt 70mm to the rear and 40mm in front for scope mounts. It’s worth noting the bolt handle emerges from the shaft/receiver/ dovetails mid-point along their length so I’d always make sure the cap screws on your scope mounts are positioned to the left side avoiding potential clashes between bolt handle and rear mount. This is not mandatory and will depend a little on your exact mount design but why risk contact with a rear mount will sit behind the bolt handle, unlike the rear mounted handle on something like the Tikka T1x.

This bolt shows symmetrical three lugs, one of which is the handle itself and this is a step ahead of most rimfires where two is generous, just one being regularly encountered in man designs. These are all at the root of the handle’s 38mm extension before a 25mm polymer ball caps it. Delightfully simple, ergonomically positioned with the ball just above the trigger’s position and with plentiful extraction force available from twin claws and ejection at any bolt speed. The cycle length is 40mm to encompass the 34.2mm O.A.L. of a 17 HMR cartridge with a 50-degree lift.

Typical of Annie is that the bolt operation is flawlessly smooth with no snags regardless of cyclical speed and careless bolt handling, all rounds, either V-Max or flatter nosed hollow points flowed smoothly from the 5-round magazine. A thrust bearing is now incorporated to aid this efficiency when the longitudinal forces are applied as the bolt cocks as it opens. This, and the “QPQ” coating might not be individually noticeable but they certainly aid what is already a well-balanced mechanical action to be one of the smoothest on the market. That magazine is one of only two slightly odd factors of the 1761, it is of steel construction and will provide a lifetime of service yet carries a polymer baseplate clipped to is that contains no ammunition volume. I can see Anschutz may have added this to physically and visually blend the magazine into the similarly polymer bottom `metal` of the trigger guard but, they say it improves handling which I agree, yet why not have it full of ammo if you are occupying the space anyway?

Loading the single column is straightforward with simple engagement, sliding up into the rifle with a push button detent within the trigger guard to release and reload. The mag doesn’t spring free but given the size, is certainly not difficult to draw out with fingers, it shows detailed precision shape and feed lips totally integrated to the underside of the bolt for reliability and longevity.

Anschutz triggers are of a high standard and here, adjustable, well weighted at 815g single stage pull and adjustable if you want to twiddle. I had no such desires on this gloriously predictable unit with excellent reach onto the vertically grooved 8mm wide blade within a guard more than large enough for gloved fingers. The safety catch emerges from the stock to the upper right side of the receiver, its serrated lever operable without any noise. Forward for fire and rear for safe, the bolt doesn’t lock but the straight handle seems to have made it subtly less easily caught and I certainly never had any accidental openings or loss of live rounds in the grass when slung on my shoulder. Lastly, a left side bolt release catch and rear cocked action indicator complete the mechanics of this rifle.

I like small pointable rimfires that are ambidextrous so the right-hand thumbhole stocked Annie would not be my first choice, yet as a standalone rifle, this stock is superb for those desiring of such. It begins with a heavy beavertail forend showing finger grooves and modest chequering to stiffly support the front of the rifle without any chance of compromise on the free-floating tube. Its lightly oiled finish on the straight grain and did show water spots after trips out in the rain so I think Anschutz (or you with patience) will need to add durability into deepening the oiled finish or going for a synthetic coating because it will soon spoil the glamourous appearance of a premium rifle.

Balance point of the gun is directly below the front of the receiver, in line with the front of the inserted magazine which for the further generosity of the stock’s dimensions, is a delightful reflection on the proportions and machining. All timber is beautifully smooth from new and water marks feel tactile with a `furry` blemish. `Angled curves` fit the human form well with a deep thumbhole adjacent to the modest right-hand palm swell grip. This sports an index finger groove for support, yet these are modest in size so never interfere with trigger operation, even in gloves.

Upper and lower beams flow toward the butt of the gun with a defined rollover Monte-Carlo cheekpiece showing on the upper comb, just enough meat is left on the under sloping lower for adequate hand/fist/ bag support when precision shooting prone. The big weight saving that allows this thumbhole to retain the central balance is with a large amount of material removed between the upper and lower giving Anschutz their charismatic familial looks before a solid 50mm or Walnut reinforce the mounting point for a 13.5mm solid rubber recoil pad and spacer. Best of all is the 14.5-inch/370mm length of pull which seriously benefits the Annie from the toy gun feel of some rimfires, making the gun feel like a centrefire in all but bolt operation and calibre. Modest chequering is shown on the grip with twin sling/bipod studs on the butt and forend.

A scant 6.5lb/3kg weight before the addition of a scope belied the looks of the gun to which I added Sportsmatch mounts, adjustable parallax 4-16x50 Vortex Viper scope and a Harris bipod supporting the rifle.

Ammunition went to Hornady with 17gr V-Max and 20gr XTP fuel. Preference here was for the 17gr pills where I often find 20s to hold a slight edge for accuracy. The lighter bullets averaged 2503fps (237ft-lbs) to the XTP’s 2240fps (223ft-lbs) with superior on paper accuracy that averaged 30mm at 100-metres from the start. The heavier XTP’s added another 5mm to that group size for five shots but this was within the first 100 rounds down the barrel. A good clean saw plentiful fragments of copper on the patches and further chronograph and target tests have shown the repeatable precision to improve with defined 4/5 shot clusters without excessively windy conditions. Extreme spread for a five round string has also lowered from nearly 75-feet-per-second down to 34fps with notable improvements then showing at 150-metres with body shots on rabbits, dialled for range, now acceptable in wind free conditions to 186-metres using the more expansive V-Max ammo.

If time and money motivated me, I might batch some 17 HMR ammo by rim thickness, because I know it always helped back in my serious 22 rimfire shooting days. Critically, gun handling was of major interest, because that longer stock and plentiful dovetail space for scope mounting allowed a more refined position using the rifle, much more like a centrefire and never feeling as if I was pouring over the rimfire like so many 13.5-inch rimfires feel to do. This is often exacerbated by limited scope mounting space on the intrinsically short dovetails of rimfire actions. This compounds a short gun in the shoulder, further spoiled by feeling like your neck is far too long, having to crane rearward, especially when prone. Optic manufacturers seem to love to brag of long eye relief for recoil protection on heavy recoiling rifles yet ignore the diminutive proportions of the fundamentally shorter rimfire actions of the world. I’m pleased to heartily recommend the Annie to taller shooters wanting that refined, fitted feel!

Connected factors include the grip filling your hand without having spare fingers floating in space, the trigger blade sits in the centre of the pad on your index finger bent at 90-degrees, a beefy forend will certainly fill your hand making the gun intuitively point and easily controlled like a trap shotgun, as well as maintaining sure gun mount in your shoulder when operating the delightfully slick bolt on the fly. Consider this when you are well supported and prone, the longer 15-inch/380mm of forend measured from the trigger blade offers gratuitous stability from quad sticks splayed widely making aiming of shots (far beyond the capability of the ammunition) easily balanced. Then when prone, that length gives excellent longitudinal stability for loading the bipod, no stock flex and supported with a fist or rear bag and bipod rested with a recoil pad that grips, but never feels spongey in the shoulder. If only all rimfire stocks were this good.