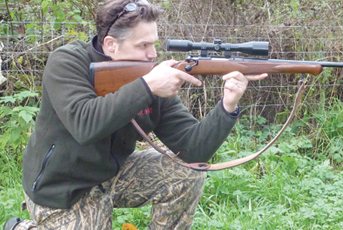 Famed for their rimfire target rifles, Anschütz have delivered on accuracy and repeatability for decades. During this time their sporting firearms have also gained an enviable reputation in the field.

It was then with great interest that I went looking for their latest action, a dedicated 223 Remington offering in the 1770 D.

I researched, and then searched high and low for an example finally acquiring one in the Isle of Wight of all places. So cash in hand and guided by the most helpful Jai (owner of Arnold Heal gun shop), who incidentally gave me ferry times, travelling advice and almost slipped into the role of tour operator, I made a day of it.

Well it’s an Anschütz ....the stock was a well finished Bavarian-style with a hogs back butt and Schnable forend, but beyond that the wood was nothing to write home about. The metal work and blued finish were good and the overall impression was of a well put together package. In truth as a dedicated 223 I was expecting it to be a little more diminutive and when Jai handed me the bolt to slide into the action, I was surprised to see the size of it.

Similar if not slightly larger than a standard Sauer 202 bolt. Having said this, the action wall is quite thin giving overall a more compact feel to it. The most notable first impression was the smoothness of the bolt! I have to say that the 1770 D has the slickest I’ve used so far and that’s having used most commercially available actions at one time or another including the Hyem straight pull (reputedly one of the smoothest).

From the pointy end back it sports a 22”, cold hammer-forged 1 in 9 twist barrel with a recessed target crown. The tube is a medium target weight according to Anschütz, I would say it’s similar to the recent fad of ‘walking varminters’ from the US, light enough to carry and heavy enough shoot straight when you get there. The 1 in 9 twist rate is a great choice for stabilizing longer bullets and pushing the rifle into the small deer/game realm from a UK/European perspective.

Interestingly though I am told Anschütz do not recommend after market threading of their barrels on the grounds that the hammer forging process introduces stresses which may be altered by the removal of metal. This goes a long way to explaining why my 17HMR Anschütz is threaded in the factory and counter bored deep back beyond the back of the thread. The idea - to leave solid metal to the outside diameter of the barrel at the point where the bullet leaves the muzzle.

Looking at the chamber end of the barrel it gets interesting… There is no recoil lug and the barrel is pressed into the action and pinned in place; to be honest I didn’t see this coming in a centrefire. This is made possible by the lugs engaging in the barrel itself and the action merely being a supportive tube in which the bolt slides.

However, when I say there is no recoil lug that is not strictly true, as it’s embedded in the stock and instead there is a deep slot machined out of the barrel wall just beneath the chamber into which it fits. In my rifle it was only bearing on a tiny (pin head) portion of the available bearing surface and showed evidence of lateral movement during firing, effects of which I will come to later. Now, I’m sure Anschütz decision to cut away a deep slot in the chamber wall is safe, but I personally think it is a step too far in the interests of rationalising production. To be frank; the lack of chamber wall thickness at its thinnest point does not sit well with me!

The bolt rotates 60° to get into battery and uses six locking lugs although the two corresponding with the upper right side of the breach are reduced to accommodate the unusual extractor spring setup. The ejection port is a small slot in the right side of the receiver with chamfered edges though small it worked very well with the plunger-type ejector/extractor.

The bolt is slick as mentioned, and has a nice knob on the end of the handle. Top side of the action is dove tailed for classic 11mm rimfire mounts as well as drilled and tapped for fixed bases. Having said this the front mount position of the screw in bases is far too far back for what yet again looked like production convenience so as not to interfere with the barrel insertion.

Moving to the rear of the metal work on the right side there is the 2-position safety catch, it’s reassuringly stiff to operate and allows unloading when it’s applied. The opposite side is the bolt release which is depressed along with the trigger to remove the bolt. On the underside of the action is a round steel pillar that is bolted to the tail of the action acting as a secondary recoil lug, it also receives the rear action screw.

I am very fussy with regard to triggers, and have to say that what looked like the Anschütz match 5094D is excellent, bettered only by the Jewell in my experience. From the factory it is set to 2.5 lbs (will go up to 4lbs) and is beautifully crisp, exhibiting a little after you have broken the shot. It is adjustable for engagement and weight though quite honestly was set up perfectly for field use.

The Magazine is a three shot (five shot available) single stack unit with a plastic base plate. It sits proud of the blued metal floor plate, while less than elegant is functional. Bolted to the floor plate is a solid trigger guard with the mag release just in front. The centre feed was functional with pointed ammunition but the sides of the diminutive feed ramp scarred the cases. I made up some hand loads with flat base hollow points and these would not feed at all from the magazine they merely hit the back of the barrel face below the chamber.

This is a difficulty with a triple opposed locking lugs and a central feed, as there is very little ramp to lift the case towards the bore centre as it is feeds. The case pick up should be with the edge of the bolt face and the lugs either side. In this way the round is closer to the axis of the bore in the first place. You still get the 60° bolt lift and enough feed ramp to lift the case towards the centre the chamber.

I used two factory loads - 55 and 70-grains, along with two of my own reloads - a 60grain Sierra flat base hollow point varminter and a 65-grain Sierra SPBT Game King. The 55-grain target loads came in at around 1 ½” @ 100yards with 70-grain at just under the inch. The two home loads were about the same as each other at ¾” centre-to-centre. What I found interesting was the groups all displayed a slight lateral shift. Remember what I said about my thoughts on the bedding system. Even with the action bolts cranked down the rifle was moving side to side in the stock. Not by much but it was enough to affect the accuracy potential to a noticeable degree!

I am a big Anschütz fan, so when they bring out their first completely new rifle in years I want to be bedazzeled not bemused. There are stunning elements in the 1770, the trigger for one, the barrel another and that super fast slick action, but for goodness sake at least make the bedding lug a shallow V shape to eliminate lateral movement so all the good bits can work together.

So frustrated, I bedded the rifle and smoothed the feed ramp and it now shoots 3/8” groups with the 65-grain Game King home load and ½” with the 70-grain factory load @ 120yards. Come on Anschütz it took a lowly enthusiast a day to bring together the parts that you spent years developing. Get it right, your fans expect more! If only they would answer my emails!