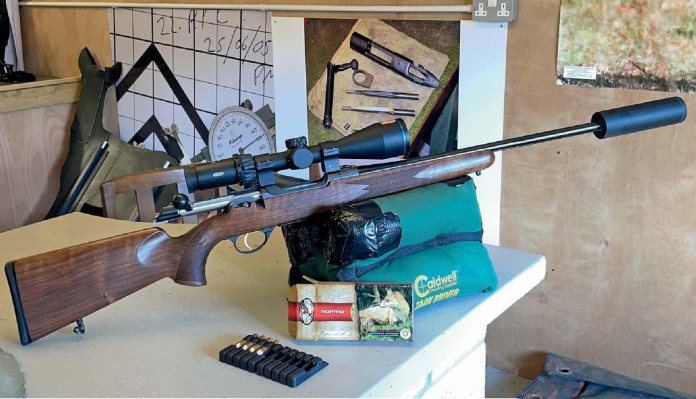 Anschutz are perhaps most famous for their 22 LR Match and rimfire hunting rifles. However, they also offer their 1771 series of small calibres models: 17/22 Hornet and 222/223 Remington, but have never really ventured into the full bore, centrefire realm. All this recently changed with the introduction of their new 1782, a rather mundane name for a full sized, fullbore hunter that shows the typical build quality we have come to expect from them.

On first inspection the 1782 is like the curate egg, good in parts. Calibre choice is small, but sensible and will cater for most, but not all European and UK tastes, with 243/308 Winchester, 6.5 Creedmoor, 6.5x55 Swedish, 30-06, 8x57IS, 9.3x62 and 300 Win Mag. They have also incorporated, integral, Picatinny bases on the receiver bridges, which is good. But, as it’s long-action only, they are spaced quite far apart, meaning very little forward/back adjustment for setting eye relief, depending on the length of the rings you fit.

6.5x55 Swedish, 30-06, 8x57IS and 9.3x62 are also 20.5 and 22.8” only, the latter in all cases being the better choice, the 23.6” option would be near ideal here, but is not offered. This fascination with short tubes for the more powerful numbers baffles me, as it does not do them justice, and it’s not just Anschutz, and seems to be something all manufacturers are doing. 308 Win has these two, plus an 18.5” option, and works in this calibre, which is very barrel length tolerant.

Anschutz has been generous with their stock choices. Currently there are four, all of good quality, oil-finished walnut, with fine, chequering. You get the Thumbhole with skeleton butt, the German with hog’s back and Schnabel forend, the Classic Pro with height-adjustable comb and the Classic (RH palm swell and straight comb), very much a standard layout. All come with QD sling studs and a slim, rubber recoil pad.

The Classic, on test showed quite a short length of pull (LOP) at 13.5”. I do not know if the others are the same, but I would assume so, as Anschutz does not indicate any form of butt extension system. Not ideal for someone like me with long arms, but I suppose and like the long action only receiver, one size will fit all, even if a tad cramped for some!

As no fan of wood stocks, which always seem to me to favour looks over substance, the 1782 has an aluminium bedding block; (aluminiumaction carrier) inset in the action void, so you get that, all-essential, solid and consistent action/ stock interface. The bottom metal supports a 3-round magazine (dependent on calibre) with an ambidextrous, paddle-type (fast release) mag catch at the front of the trigger guard. Being long-action only, all magazines are the same and adjust for cartridge overall length (COL) with a plastic filler block in the rear.

The bolt is a big chunk of metal and fluted on top. Hard chrome plated to resist corrosion, it runs smoothly and reliably and uses a swept back handle with round ball end. With a plunger-type ejector, one notable feature is the actual size of the extractor claw, which is big!

Unsurprisingly, the trigger is a gem, as Anschutz knows a thing or two about this subject. Called the 5082 D, it’s an adjustable, single-stage build and comes factory-set at a pleasing 1100 grams and is adjustable from 400 - 1550 grams. It’s possible to reconfigure it to two-stage operation and also the blade can be moved forward in the guard, which to a degree offers a better finger position, given the short LOP.

Safety-wise, the catch is located rear/ right of the action and shows a 2-position, rolling lever, that pulls back for SAFE (bolt locked) and reverse to FIRE. It’s well positioned and easy to operate. Overall, a well presented rifle, albeit a tad on the heavy side, a MEGA lockable carry case is also included along with QD sling swivels for the sling studs in the stock. Price; well expect to pay the thick end of £2K.

Importers, RUAG Ammotec UK Ltd, supplied a Classic 1782 in 243 Winchester along with some 76-grain Norma Tip Strike ammo, which is more varmint orientated. For deer work I favour something heavier and my pet reload is a 100-grain Nosler Partition that runs just shy of 2987 fps/1992 ft/lbs. from my 22” Blaser R8. With the shorter 20.5” tube I was expecting some velocity drop with both loads from the Anschutz.

On handling, a number of aspects of the design become apparent: 1 - the weight is around 1.5lbs more than a comparable hunter, even before you put a scope on. However, this does make it very recoil-friendly in 243 and I would imagine in some of the other calibres too, never a bad thing. 2 - There’s little eye relief movement available, due to the spacing of the receiver bridges, unless you have a scope with a long body tube or use slim rings.

3 - the trigger is superb, and I found the 1100 gram factory setting to be ideal, along with the crisp and short single- stage pull and the ability to adjust the blade position. 4 - feed and bolt operation is smooth and slick and the mag is easy to fill and ejects positively. 5 - LOP is too short for people of my stature and some form of spacer system would have been appreciated. Saying that, it means it’s one size fits all and you get on with it. 6 - in 243 and some other calibres, the 20.5” barrel is just too short (308 excepting), I’d pick the 22.8” every time. 7 - the action can’t be single-loaded, just by throwing a round in and closing a bolt, as it must be dropped into the chamber.

Fitted up with a Meopta scope, Harris BRS bipod and a moody testing began, with some interesting results. The mag snaps in and out nicely and the ambi, release catch is to be appreciated, as was the smooth and easy bolt and practical safety system.

First up, Norma’s 76-grain Tip Strike, with a ballistic coefficient of 0.332, it shot 0.5 MOA at 100m, which I thought good, recoil was negligible, and it was very easy to maintain the rifle on target. Equally, the feed and ejection stroke was smooth and easy. Ballistics were a bit down, Norma quotes 3445 fps/2003 ft/lbs. from a 24’ barrel, but reality showed 3169 fps/1682 ft/lbs., with the 20.5” tube, so technically not large deer legal, but then again, it’s a varmint round and I would not recommend it for deer.

My Nosler, 100-grain reload produced a pathetic 2578 fps/1484 ft/lbs. seriously down on what it does in my 22” R8, illustrating the issue with this calibre in shorter tubes. This one also came in around the inch, the Blaser regularly prints 0.7” and easily exceeds 1700 ft/lbs. In mitigation, not all makes of rifle like the same ammo, or perform well with it. I have no doubt rounds around the 85 -100-grain mark would easily make 1700 ft/lbs. in the 22.8” barrel option.

The Anschutz 1782 leaves me in two minds, ONE; it’s well-built, reliable and easy to shoot, with a great trigger and action that offers good accuracy potential. TWO; barrel length choice in some calibres will let it down, the long action only receiver makes financial sense, but would benefit from a scope rail, which would give greater mounting flexibility. Equally, the LOP is a bit short and with no adjusting system it forces compromises and for a hunting rifle it’s quite heavy.

Price-wise it sits in its own bracket, the opposition is Sauer’s 100 and 110, Mauser’s M12 and Benelli’s Lupo, all well sub-£2000, even the Lupo. None-theless, it’s a quality build and design, that might be right up your street, so well worth consideration.