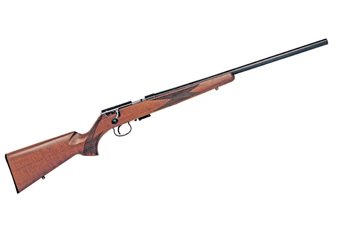 Despite my age I’m very much a person who subscribes to the benefits of modern firearms design and technology – good synthetic stocks, bedding, decent trigger etc all serve to make a more accurate rifle. However, I have and will always admire classic looks and practicality and the test gun sums that up to me in spades.

The Anschütz 1416 D KL Classic certainly lives up to its name as it’s undeniably plain and traditional but the build just oozes quality. The stock is walnut with a straight comb and no cheek piece in a lacquer finish, at the rear is a black plastic plate. The pistol grip is full and deep showing a more upright angle, chequering is in the usual places and there’s a man-sized length of pull (LOP) of 14.17”. A useful feature as standard, QD sling studs fore and aft, better than the usual German sub-1” fixed swivels.

The 1416 D KL uses Anschütz’s Match 64 action and is of tubular design. On top is an 11mm dovetail, which is also drilled and tapped for scope bases, which are not included. From the box this model comes with basic yet functional iron sights. At the back, set in a transverse dovetail is a fold-down, U-notch plate that’s adjustable for limited windage and elevation. Up front a height-adjustable pin on a ramp with a removable steel protector. The barrel is long at 22” for a 22 Rimfire and of medium weight with a 16mm diameter and counter-bored at the muzzle.

The barrel is not threaded for a moderator and if you want that facility then you are going to have to remove the front sight and cut the tube back to suit. Alternately you could opt for the 1416 D HB Classic, which offer a heavier 19mm, bare-backed barrel; everything else is identical. Though still un-threaded from the box. The finish is again traditional showing deep and even blueing.

The controls consist of an angled and swept back bolt handle with a large ball end, this engages down into the receiver to lock the action. With this model Anschütz has increased the locking area by 15%. Behind this to the right is the safety, which pulls back for SAFE and reverse for FIRE. On the left is a small, push-down tag that allows bolt removal. The overly small mag catch is behind the 5-shot, single column box and pushes forward to disengage; 10-shot clips are also available! Anschutz offer this gun in both right and left hand options.

The trigger is a single stage unit and adjustable from 1000 to 2000 grams (2.1 to 4.3 lbs), it comes factory set at a pleasing 1200 grams (2.6 lbs) and breaks as clean as a glass rod with just a touch of the finger and no creep. This is one of the areas you gain from as Anschütz’s metier is Match riﬂes.

The 1416 is not a small riﬂe but weighs 5.95 lbs (un-scoped) and even with a scope on still feels handy measuring 41.5” muzzle to butt, and offers that solid and smooth build we have come to expect from Anschütz. It’s a plain Jane but beautiful in its simplicity. Importers RUAG supplied a set of 1” HMS rings that go straight on to the dovetail; to this I fitted my tried and tested Kahles 3-10x56 CT scope. Though saying that, I was also going to shoot the riﬂe with the irons too!

The riﬂe comes up easily and you soon appreciate that big, mid-angled pistol grip with the straight, medium-height comb setting your head up for a near ideal sight position. The chequering is not massively aggressive but provides enough hold where it’s needed. Two things that I did not like were the stiffness of the safety catch and mag release, which is small with very little to push against! Annoying, as these controls were very much at odds with the smoothness of the bolt operation and general feel. On that point the bolt can be cycled with the safety ON, which is good for unloading.

For testing I used Winchester and CCI Sub-sonics, as though un-moderated these still give decent noise reduction over higher velocity fodder. The magazine fills easily enough and the riﬂe fed 100% reliably, though I did find that the CCI ammo was harder to chamber than the Winchester, facts most noticeable as I rolled the handle down to lock the action.

Accuracy was impressive; at 50-yards the Winchester shot a ½” group, with the CCI not far behind! It was a cold day and I shot wearing gloves, which exacerbated the smallness of the magazine release catch. The best way is to place your finger on the underside of the stock and push it forward until it contacts the catch. The empty mag ejects cleanly. The safety is a tad firm too, so tended to be less instinctive in use as you have to put a bit of effort into its operation. However, at the end of the range session it was starting to feel slightly better, and I’d say a few hundred rounds would sort it!

The iron sights proved practical, though the large rear U-notch plate does tend to restrict vision around the target a little. But point of aim performance up to 35-40-yards can be expected. Truth is most will not bother, especially as the majority will want to fit a moderator. Overall I have few complaints as it’s accurate, reliable and rather classic. The UK importers should really offer this riﬂe threaded, as it would doubtless sell better.