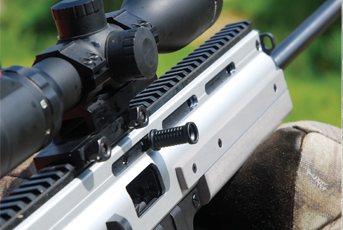 The influx of what I like to call rimfire, military look-a-likes has thrown up some good, bad and mediocre guns and I think apart from the Beretta ARX160 I have shot them all. Probably the worst was the ISSC Mk22 Modern Sporting Rifle (MSR)! Looking like the FN SCAR it uses the same bolt system and build as the German Sport Gun GSG5 and in use started off OK but swiftly became a regular jamamatic. My test was a short term affair but I have heard various tales of woe from owners. Suffice to say it has become a bit of a pariah in the rimfire, semi-auto world!

So imagine my surprise when I found out that Anschütz, yes
that’s right the kings of rimfires,
were apparently offering their own 22 semi-auto look-a-like for what they describe as dynamic shooting. This covers everything from 50m precision to IPSC (Practical-type) events using iron or optical sights. Called the MSR RX 22 TM it did not set off any alarm bells until I Goggled it, when I saw what looked like the ISSC Mk22. Apparently it’s a joint development by Anschütz, GSG and ESC Ulm to develop and produce an accurate semi-automatic rifle with excellent shooting performance that is suitable for many roles, we are told!

My first thoughts were why would Anschütz go this route, after all they have a serious reputation to uphold and the ISSC Mk22 had proved to have a bad one? However, they had this to say: “We use the results and experience of IPSC shooters in the development and optimisation of innovative sports rifles. We have exposed the MSR RX 22TM to the same extensive tests as our hunting, biathlon and target rifles to provide our customers with a sophisticated product.”
Also this from Anschutz on the subject of bolt carriers cracking as highlighted in last month’s Return Fire column: “I am not 100% certain that the screw had been loctitied with the ISSC version however you will see from this that ours has been. We will also put in the box with our version that the customer should read the safety manual and refrain from removing the breech screw otherwise all warranty will be invalidated.”

A call to the new Anschütz distributors (RUAG Ammotec UK Ltd) saw a model soon landing on my desk. With little enthusiasm I opened the box and saw that if nothing else the cosmetics and some of the build had changed.

Three things hit you right away, the heavy, 16.5” match-type barrel (no tubes and liners here). The brushed aluminium upper body shows grey wooden furniture that consists of a plain forend with accessory rail underneath and a skeletonised, hunchback, fixed wooden butt. However the lower receiver is identical to the ISSC gun, made of polymer it has an M16 A2-type pistol grip and ambidextrous safety catch and mag release button. Also the same is the full-length Picatinny rail on top and the 3-position left and right mountable cocking handle. Fold-down, adjustable iron sights come as standard. Feed is from an ISSC 10-shot magazine with external follower lugs to aid loading. The larger 22-shot clip is also available.

There are two models and four options, though all share the same solid barrel – the Precision (silver body) and the Precision Black (black body) both show the grey wood stocks. Next the Blackhawk (black finish) and Desert with a desert tan finish. These last two are like the ISSC Mk 22 with the side-folding, length-adjustable stock and hinged comb. Up front the forend shows three more Picatinny rails at 3, 6 and 9 o’clock, instead of the 6 o’clock accessory rail of the Precision.

Visually the Precision model does get away from the ‘black rifle’ look, which is aided by the butt and rather different forend build with its accessory rail. The length of pull (LOP) at 13” comes up quite short, though it’s still comfortable to shoot. Though not included Anschütz offer a number of aftermarket accessories such as different butt plates (hook or rubber) with a length-adjustable extension that can be adapted to the individual shooter. Equally there are target, aperture sights along with an 11mm dovetail adaptor. This could well sell the gun to the precision crowd. We are told the single-stage trigger is adjustable from 3.5-5.5 lbs though comes factory-set at 4lbs.

The Precision models do not have a folding butt, though it looks like it as it attaches via the standard hinge, though is locked in position. Also the holding catch, which doubles as a case deflector is still in place. At 33.5” long and 7lbs (un- scoped) the Anschütz comes up as a solid feeling and surprisingly handy package. Certainly when compared to the original ISSC.

My initial concern was reliability, as I was fully expecting the same lack of it that the ISSC Mk22 had exhibited. RUAG supplied 500-rounds of RWS, 40-grain Rifle Match 22 Long Rifle, to this I added Lapua Standard Club, MagTech high Velocity, Winchester Expert (match-type) along with CCI and Remington sub-sonics. On top I fitted a Deben Eclipse 30 1.5-6x42 IR scope in a Leapers one-piece mount.

All I was initially looking for were the types and number of stoppages, so proceeded to run box after box through the Anschütz. After 100-rounds in and nothing, I switched to the Winchester Expert, again there were no dramas, up to 150 now and I had a stove pipe – bolt closed with empty case jammed half in/ half out. Not an uncommon occurrence on any semi and it was easily cleared and did not happen again. Up to 200, I switched to the MagTech HV, sweet as a nut, this is a dirty round so was expecting it to up the crud build up and cause problems – but still nothing.

At 300 I switched to the subs and got my first real problems, both the CCI and Remy showed failures to chamber on the initial load. I thought dirt build up and switched back to the RWS, Winchester and MagTech and the gun run as sweet as it did before. Guess it didn’t like sub-sonics, which can be the make or break on many semi-autos rimfires. I then moved on to the Lapua Standard Club and the RX22 was not that keen with first round failures to chamber and the occasional hiccup.

Given the three brands it liked I reckon it did 350-rounds with just one stoppage. I left it there to get cold and sticky, then returned to it later in the day. Probably ran other 100-rounds through it with no problems before I stopped shooting. Guess it’s reliable with the right ammo!

Off a bag at 50-yards both the RWS and Winchester were keeping things sub-3/4”, so accurate enough. A better shot and a finer reticule would doubtless improve on that!

I have to admit I was very pleasantly surprised at the reliability and shootability of the RX 22. Compared to the original ISSC it seems to me that whatever input Anschütz had into the re-design worked. However, certain aspects remain the same. The trigger offers a long take up, though the release is OK but not as crisp as I would have liked. The cocking handle can be set up for both left and right handed shooters with the small case deflector aiding the former.

Stripping remains the same, which is a pain as the trigger mech housing (TMH) is retained by two cross pins with screw heads. This means you need two slot head drivers to do the job, better would have been sprung push pins. After that, four screws need to be removed just to take the butt off and then it gets complicated. The culmination is splitting the bolt carrier to fully access to bolt. Like the Walther-made Colt Tactical series and the H&Ks, the process is just too damn long winded and most won’t bother.

However, in fairness when I dropped the TMH out the bolt looked quite clean given it had about 450-rounds through it and a blast of gun cleaner seems to get most of the crud out. In this condition you can access the bolt with a brush to remove debris and lubricate and also the TMH to a greater degree too.

In use the L/H safety is a bit awkward to operate with the firing hand thumb and much like the SIG522 it’s quicker to flip the R/H paddle instead. There’s an automatic last round hold open and the magazine drops clear of the well when the release button is pressed. There’s no magazine safety and live round extraction does not always happen. Also no manual bolt catch apart from pulling back on the cocking handle and releasing it.

So far the Anschütz really impressed me and should not be judged by the problems of its parents, as it’s obvious things have changed for the better. Longevity and reliability is the next big test for the MSR RX 22 TM, as if it can prove it can stay the course it could be well worth the effort!