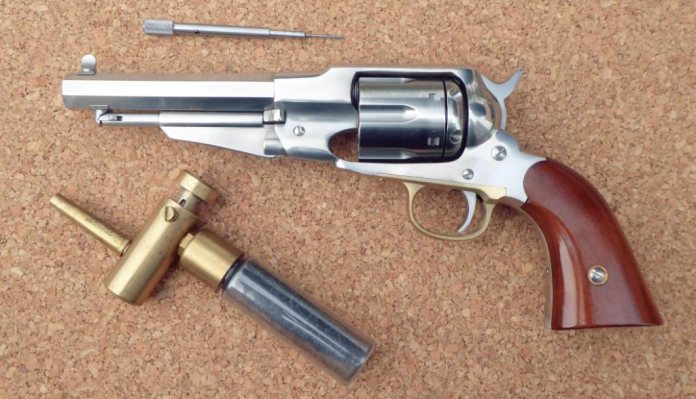 When I reviewed the Anvil revolver a few years ago, I liked it so much I bought one. That pistol is still performing well and is a joy to shoot. Recently, Anvil sent me their latest creation, the Renegade, and I have to say they just keep on turning out great work.

If my original pistol has one minor drawback, it was the tiny firing pin and spring that could be lost if you are not careful when removing the cylinder. Thankfully, that has not yet happened to me, as I am extra cautious when dismantling the gun. The new model overcomes this, by having an elongated firing pin fixed to the hammer, very much like those on the original 19th Century Remington NMA revolvers that were converted from percussion to metallic cartridges. Removing and replacing the cylinder is now just as easy as on a cartridge version of this pistol. The new pin looks rather delicate at first glance, but this type proved its worth in the nineteenth century, so I see no reason why it should not do so today.

The donor revolver for this conversion is the Uberti stainless steel model of their Remington New Model Army with which many readers will be familiar. The finish on the Uberti is very good, with only minor imperfections in the wood to metal fit of the grip panels. All metal edges are welldefined, and the operation is as expected from this company.

Sights are very basic, as were the originals, being a channel in the top strap for the rear and a hollow ground post dovetailed into the barrel at the front, but the sight picture is quite good. Shooting offhand, this pistol printed a couple of inches low for me, although others may find it different, but the front sight is high enough that, had this been my gun, I could have shaved a touch off the sight, to bring up the point of impact. However, I see this pistol being primarily used in CAS competitions, where bullseye accuracy is not deemed paramount.

The Remington has a nice, wide, flat trigger and I have seen these with after-market chequering, which is a relatively inexpensive but worthwhile improvement. Trigger pull is very good out of the box, breaking cleanly with no creep. The gun is proofed for five grains of Herco powder, but I used the 4.3-grain charge thrown by my Anvil powder dispenser and this proved to be very satisfactory, with mild recoil. The catch and latch arrangement for holding the loading lever in place, is well cut and does its job well. The lever can be used to load the balls on the revolver, but as the cylinder needs to be removed to insert the primers, I suspect many users will opt to load off the gun, leaving sole purpose on the Renegade to keep the cylinder arbour in place until the cylinder needs to be removed for cleaning. The Uberti Remington NMA is a well put together bit of kit, but craftsmanship and quality are not the sole preserve of major manufacturers.

During the 19th Century, percussion revolvers from all manufacturers, with very few exceptions, were fitted with a plain cylinder, some with decorative roll marks, and it was not until the metallic cartridge era that fluted cylinders gained prominence. The Remington NMA, and its modern reproductions, was no exception, but Derek Buchanan of Anvil has chosen to fit his new Renegade revolver with a fluted cylinder, and I have to say it looks superb.

Because the cylinders on these revolvers are proofed for black powder only, it is necessary to manufacture new cylinders to take the increased pressure of smokeless propellants. This new cylinder with its revolving, removeable back plate, are the only major new parts fitted to the revolver, and I challenge anyone to tell that these parts were not made and fitted at the Uberti factory, such is the quality of the workmanship. As will be seen from the photographs, the test gun came with two extra cylinders and each one locked up extremely tightly. The finish is exemplary and the fit to the Uberti frame is superb.

The removeable back plate mates to the cylinder via a pin (on the cylinder) and a hole (in the back plate) arrangement and the fit is so precise that if you use too much pressure you will invariably get it that onethousandth of an inch out of line and it won’t go on. Gently does it. This arrangement ensures that the back plate and cylinder turn as one. The plate has six holes which line up with the rear of the chambers, allowing the extended firing pin, the other ‘new’ bit on the gun, to strike the 209 shotgun primers, which sit in recessed cups.

Turning to the front of the cylinder, you will notice that the rear portion of each chamber is narrower than the front. This rear space is just the right size to accommodate the charge of powder thrown from Anvil’s clever little powder dispenser, with the ball taking up the front portion. Unlike black powder revolvers, no separate lubrication is needed; Anvil recommend that the balls are pre-lubed with Alox liquid.

The principal difference between the renegade and my ‘Classic’ Anvil conversion is that, whereas my revolver can be fully loaded without taking the cylinder from the gun, this new one requires cylinder removal to seat the primers. This is because the original models (still available), have a loading gate, much like breech loading single actions, fitted to the rear plate, which allows primers to be seated with the cylinder in place. The back plate is separate from the cylinder but does not turn with it; because the Renegade has a back plate which revolves with the cylinder, it needs to be removed for primer placement.

As mentioned above, I believe that many shooters will choose to load the cylinder completely while off the gun and this is the method I chose. This does require the purchase or manufacture of a separate loading stand, but I feel it is worth the cost or effort. The fact that the cylinder is much faster to take out and put back than my gun means that loading powder and ball on the stand is just as quick as doing it on the gun. Remember to remove the spent primers before loading the powder and ball in case there is one stuck, which will need to be pushed out from the front of the cylinder. Then, it’s just a case of six squeezes of the powder dispenser lever, drop six balls on to the cylinder, ram home, put your primers in, replace the back plate and put the cylinder back in the gun. I did not run a watch over it but from firing the last shot to placing a fully loaded cylinder back in the gun should take no more than ninety seconds once you get into the swing of it. Incidentally, for those who have only loaded a black powder revolver with percussion caps, these 209 shotgun primers will be a revelation, particularly on those cooler days. Spent primers will often drop out by tapping the cylinder on a bench but the stubborn ones can be removed using the small rod supplied. On my own revolver, this rod sits in a tube on the side of the barrel when not in use but here it comes separate. The rod is not stainless steel.

The extra cylinders supplied with the test gun could be pre-loaded, giving me eighteen consecutive shots very quickly. This is okay at a bench but I’m not sure whether BWSS rules would allow the changing of loaded cylinders while walking down a range, even though dropping one would be unlikely to cause a problem, as the primers are protected by the back plate. But how cool would it be to put eighteen shots on to the paper as you walk towards it, Clint Eastwood style?

The new renegade is available with 5½-inch or 8-inch barrel and with open (as here) or target sights. Spare cylinders are available, and Anvil is now offering to convert customers’ own black powder guns to the new system. Check out the website (anvilconversions.co.uk) for full details of their services and prices. Once again, Anvil has given me a lot of pleasure with one of their products and, if I did not already own one, I would shell out for the Renegade in a crack.