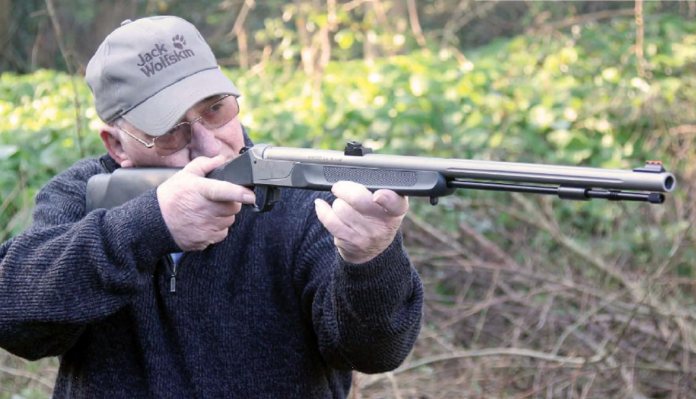 In-line muzzle-loaders have been around for some time, with the Spanish company of Ardesa being one of the main players in the field. Love them or hate them, muzzle loading firearms can provide some of the most challenging and rewarding shooting you will experience.

Compared to centrefire rifles, the amount of loading data available is sparse to say the least, usually comprising of a ‘recommended’ powder charge for each calibre with a typical projectile. The process of blending a particular make of powder, in the correct weight, with the most suitable projectile, and matching the combination with your particular gun, is one which requires time, patience and not a little skill. But once you hit that magic permutation the results will be well worth the effort.

The use of muzzle-loading firearms is limited in this country to target shooting, the governing body for those of a competitive nature being the Muzzle Loaders Association of Great Britain (MLAGB). Check out their website at www.mlagb.com for details. On the other side of the Atlantic, these guns can be used for hunting and the Pursuit rifle is aimed squarely at those hunters who like the challenge of black powder but who prefer modern design and materials and its light weight and weather-resistant construction make it ideal for a day in the field. Of course, many shooters like the idea of a muzzle-loader just for a bit of fun and here again the Ardesa proves to be an excellent choice. If you are a bit of a history buff, then you will doubtless choose something with a lot of walnut and blued steel for your front-stuffing fun gun, but the simplicity of construction and ease of maintenance makes this rifle a great choice for the casual black powder rifle shooter.

The mention of a ‘.50-calibre’ rifle may deter those whose first thoughts conjure up the modern Barrett rifles or those massive Sharps buffalo rifles of the 19th Century, with their inherent weight and punishing recoil. These rifles are meant for extreme range accuracy or knockdown power, whereas the Pursuit is a relatively short-range piece, designed to take medium game out to 200-yards or so. With the correct projectiles, lead bullets in a plastic sabot, American hunters will find the rifle a very capable performer at these ranges. I have not been able to source these sabots on sale in this country (the only retailer I found is ‘out of stock’) so the UK shooter is left to choose between the very limited number of lead balls and bullets that are on sale or, for those who wish to delve a little deeper into the dark side, casting their own. Going down this route will obviously involve more time, effort and expense, but is probably the only way to wring the very best out of this type of rifle without the sabots. You could of course opt to import the bullets and sabots from the USA. Whatever you choose to load, you will not find the Ardesa severe on your shoulder; it really is the proverbial pussy cat to shoot.

Operating much in the manner of a single barrel shotgun, the design of this rifle could not be much simpler. Whereas the shotgun will generally have the opening lever on the top tang, the Ardesa uses a button set into the front of the trigger guard. Opening the gun presents you with the ‘Accelerator’ breech plug, which is screwed into the barrel. This plug should be easily removed with finger pressure but a tool is supplied if it does get stubborn. Removal of the plug makes barrel cleaning the simplest of chores. It also has the benefit of allowing you to remove a ball or bullet easily on those very rare occasions when you forget to put the powder in! Instead of the usual percussion nipple, the plug has a central hole to take the standard 209 shotgun primers, and those who have struggled on cold days with normal percussion caps will appreciate the ease of use with these larger primers.

The black composite stock and forend are nicely finished and proportioned, the stock having a slightly raised comb and chequering on the pistol grip. The stock is hollow (possible storage?), making it very light, and is topped off with a reasonably soft rubber buttpad, which goes a long way to taming the recoil. The forend, also chequered, is wider at the bottom than the top, affording a very comfortable hold. Sling swivel studs are fitted for those who may need them.

The lightweight alloy receiver and Chromalloy steel barrel have a CeraKote finish that the catalogue describes as “…fifty times more corrosion resistant than stainless steel…”. The barrel, 26-inches long and with a 1 in 28-inch twist rifling, is tapered and is lightly fluted forward of the forend. The rifling ends around 8mm from the muzzle. A previous version of this model that I reviewed had a ported barrel, but this has disappeared from the current offering. The Pursuit G4 comes equipped with an excellent set of metal Williams sights with fibre optic inserts, two green dots on the rear and a red one at the front. The rear sight is adjustable for windage and elevation with graduation marks on the sight wing. The barrel is also drilled and tapped for the fitting of a scope. There is a cross bolt safety behind the trigger guard.

The rifle comes equipped with a solid aluminium ramrod with a nifty t-piece handle attachment which can be used as a bullet starter. For storage or transit, this handle can be kept on the ramrod, while it is slung under the barrel, or you could keep all of these bits in the hollow butt stock. Also supplied, is the above-mentioned breech plug removal tool, an Allen key for removal of the fore end, a hammer extension for scope use, a brass jag and a good little instruction book. For good measure, a certificate from the Spanish proof house is also in the box. The package comes in a box marked up with the ‘Traditions’ name and logo, the brand under which these guns are sold in the USA.

I have a stock of various sized round lead balls on hand and for this test I chose a .490-inch manufactured by the Buffalo Bullet Company, weighing 179-grains and enclosed in a lubricated patch. I used CCI primers for ignition. Shooting at 50-yards, I started with a load of 65-grains of Henry Krank medium black powder. Recoil was minimal and three shot groups, with a wipe through after each string, averaged around five- to six -inches, with a best of just over four and a half and a worst of over eight inches. Upping the charge to 85-grains showed a very small increase in felt recoil but no noticeable difference in accuracy.

A second trip to the range allowed some shooting at 100-yards, albeit with a gusty cross wind. Using the 85-grain charge it was all I could do to keep the shots on an A4 piece of paper, not really spectacular for a gun meant for hunting. The wind obviously played a part but I feel there is a lot more to come from this rifle. On a calmer day a bit of experimenting with loads will bring out the sweet spot for this patched ball, but I think that some plastic sabots with a lead bullet should really show what the gun is capable of. I will attempt to get hold of some sabots and re-visit this rifle at a future date. If I can get it fitted with a scope that might also make a difference.

Cleaning these in-line rifles could not be simpler. Even after extended shooting there was minimal fouling around the breech plug threads and it came out quite easily without using the tool. A couple of solvent soaked patches, followed by a dry one, were pulled through the barrel before leaving the range. I prefer to remove the barrel for cleaning, so back home that was the first job. Using a plastic funnel and kettle I poured a couple of pints of boiling water down the barrel and it came up like new. A solvent soaked patch followed by two dry ones completed the job. A cotton bud got what little dirt was in the breech plug threads at the breech and the plug itself was cleaned with an old tooth brush. One drop of oil on the threads and the gun was re-assembled. Outside was wiped with a baby wipe and a dry cloth. Total time less than 20-minutes.

I’ve tried a couple of these rifles now and enjoyed the experience each time. The simplicity of the action and low maintenance, combined with relatively low running costs, make these great rifles for someone looking to take their first step into muzzle loading rifle shooting. With everything ‘down the centre’ so to speak, this is a true ambidextrous rifle. The Ardesa catalogue shows these rifles in a camouflage finish but I’m not sure that Henry Krank import this variation. Check out their website to see what other models they have in stock.