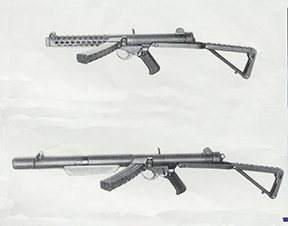 Dagenham, Essex; now there’s a name that conjures up one thing - Ford cars; well think again, as not far from the old Ford plant was a company called Sterling. To us shooters that means the British armies sub machine gun - the L2A3 and the silenced version the L34A1. Going back even further we have the links with GH Lanchester who copied the German MP28 sub machine gun and produced the Lanchester SMG for our Royal Navy. Later on, and in cooperation with GW Patchett, the design was further refined into the aforementioned L2A3 and L34A1 (Sterling/Patchett Mk V).

Many people think that’s all Sterling made, but they also offered a 357 Magnum revolver and a .223 assault rifle (AR-18). Both being bought-in designs that were made at the plant. I have had the pleasure over the years of shooting all their products, but it’s their last, the AR-18, that is the subject of this story.

The history of the AR-18 goes way back to Eugene Stoner; the man behind the M16 and Armalite AR10 rifles. Stoner conceived the AR10 first as a 7.62 Nato battle rifle. The radical design with its rotary bolt and gas-only operating system was for its day highly advanced. The AR10 saw limited service with some European nations, but was in truth the father of the 5.56mm M16, being in many respects a scaled down version.

At that time the Armalite Company was linked with Fairchild Engineering on many projects, one being the rationalisations of the AR10 into a cheaper Nato-calibre rifle. The result was the AR-16, which did away with the expensive aluminium upper and lower receiver forgings and gas-only operating system and presented a more conventional gas/piston system in a rifle made from steel pressings spot welded together. The idea was something that was both cheaper and less complicated to build, so might have an appeal to countries with a more basic industrial capacity.

By this time the 5.56mm cartridge was established with 7.62 Nato battle/assault rifles taking a back seat to the seemingly pipsqueak 223 Remington. Although the AR-16 was ready, which happened shortly after Armalite and Fairchild split up, the project was suspended in favour of something in 5.56mm, which would have a potentially greater global appeal due to the increasing adoption of the smaller calibre.

The resultant rifle was called the AR-18 and, unlike the M16, was all-steel in construction and made of steel pressings spot welded together. Like the M16 it was light at 7lbs (inc a loaded 20-round magazine) and compact at 38”. Unlike the M16 it offered a side-folding butt as standard, an attractive feature for a military rifle; length was 28.75” folded. This was allowed by the operating system, the multi-lug bolt head sits low in a square carrier block and is cammed in and out of engagement by the carrier moving forward and backwards. The carrier runs in the receiver on two steel guide rods with spring wrapped around, so - unlike the M16 - there’s no spring or buffer tube in the butt, which limits this rifle to a short sliding butt piece should you want a more compact carry package. The self-regulating gas system uses a fixed piston with an in-line tappet and operating rod.

Gas is drawn off the barrel by a port and directed up and backwards through the fixed piston. This blows the tappet rearwards, which in turn strikes the operating rod to move the carrier back to unlock the breech. Once the working parts have achieved sufficient energy to cycle the action, the tappet uncovers a gas port which vents the excess gas to atmosphere. Not as slick or simple as the fixed hollow gas tube of the M16, but perhaps more reliable, due to kit being less prone to fouling build up and certainly accessible if things go wrong.

The rest of the rifle is very M16 to look at. The gun hinges at the front of the lower receiver and is retained by twin cross pins, the forend is synthetic and the post foresight sits in a U-shaped protector at the front, leaving the barrel free apart from a T-shaped muzzle brake. Typically this could be used to launch rifle grenades, without the need to attach a boom or similar launcher unit, or mount an M16-style bayonet. The rear sight is an L-flip double aperture with thumbwheel windage correction. Feed is by a 20-round (M16 magazine) and the rifle offers selective fire via a combined safety/selector switch on the left side above the pistol grip, which is doubled up on the right to give ambidextrous control.

The magazine change is again similar, though with an elongated bar located on the lower right side of the magazine well. As might be expected there’s an automatic last round hold open. The charging handle is S-shaped and mounted on the right side and reciprocates with the bolt and can be used as a forward assist by simply pushing it with the heel of the hand. Unlike the original Armalite AR-18 the Sterling gun offers a half-length ejection port cover. Like the AR15s it’s spring-loaded and opens automatically as the action cycles.

Accessories included a clip-on (scissors) bipod, bayonet and a dedicated low-power telescopic sight that located onto a tapered base welded atop the receiver. Though not as pleasing to look at as the M16, the AR-18 is not so tall, due to the location of the sights and a far more cost effective package too.

In use the bipod is a mixed blessing, as it clips directly to the barrel, so any pressure brought to bear when you are in the firing position can cause the barrel to deflect slightly. This is a lesson most of us learned in the old days of PR, but the bipod is light, easy to fit and allows you to support the rifle without laying it down.

In the USA the AR-18 never met military requirements and the records shows a history of part breakages and feed problems. Armalite, though making the AR18, never had a true production facility and sold the rights to Howa Machinery of Japan. Ironically, due to an American/Japanese agreement that prohibited the Japanese selling rifles to belligerent nations the AR-18 could not be sold back to the USA. The reason being that at this time they were embroiled in the war in Vietnam.

Now we come to the Dagenham connection. In 1974 Armalite and Sterling came to an agreement where the AR-18 and the semi-auto version the AR-180 could be made under licence at Dagenham. This was a feather in the company’s cap and they wisely made much of it with a big PR campaign and a few different models of the rifle. I think they were hoping for UK police sales, as in the late 1970s and early 1980s constabularies were looking to upgrade their tactical weaponry, which included a 223 assault rifle. For example the Met Police opted for the H&K 93 for D11, the then tactical firearms unit in London.

Sterling offered the AR-180 5.56mm Police Rifle (fixed and folding butt) and the neat little AR-180S Police carbine with short barrel, forward pistol grip and cone-style flash hider. They also improved upon the magazine system with a re-designed 20, which showed a distinctive forward curve at the base, as opposed to the straight-up US-style and 30-rounder, plus a high capacity 40-shot clip too. In the old self-loading PR days the 40s were very popular with AR15 shooters for the free-style, high round count stages…All steel, these magazines were rated as possibly the best design of their day and many servicemen who used the SA80 Bullpup sought Sterling mags in the early days when the Radway Green units proved troublesome.

Sensibly Sterling, as they produced a semi-auto version of the rifle, also offered it for civilian use. Surprisingly and in a country were Practical Rifle was really starting to take off; the AR-180 did not prove that popular, with the Colt AR15 getting the majority of the limelight if you wanted a 5.56mm self loader.

Like the AR15, the AR-180 offered a low power (3 X 20) compact, bullet drop compensating (BDC) scope with 100 yard increments. Cut for the standard US M193 ball load - 55 grain FMJ bullet doing 3200 fps, all you did once you had zeroed was to click the top drum around to the range setting, which I believe went out to 500 yards. The mount was far more sophisticated than the Colts, which used the gutter in the AR15’s carry handle and a simple screw and lever, which was never the best idea in the world! The AR-180 had a wedge-shaped base that the foot of the scope slide over and positively locked onto, making it quick and easy to fit and remove.

Though not really a success in the UK the AR-18 lives on with the Singapore Armed Forces as the SAR80. Again the history is interesting. The Singaporeans changed over from the old 7.62 Nato SLR L1A1 (Australian version) to the US M16. The initial application in 1966 was rejected by the US due to the need for rifles for the Vietnam war. A later deal with Colt allowed them to make the gun under licence, but also restricted them from selling to other countries. Obviously Colt wanted that piece of pie. After a few 50-50 deals with Colt to produce rifles for sale the manufacturers Chartered Industries Singapore (CIS) decided to make their own design and approached Sterling for help. Chief designer (Frank Walters) had been working on a rotary bolt .223 rifle of his own and in conjunction with their manufacture of the AR-18 came up with the original SAR80, which CIS produced. As can be seen the SAR80 is not a million miles away from the AR-18…

Though a big fan of the AR15 I have used the AR-180 a fair bit too, and always found it a nice little rifle. If I had one criticism I would say that it’s very rattley by comparison, with the folding butt version having a bit of play even when locked up. Given the fact that even as early as 1980 PR matches were pushing the ranges out to 500/600 yards then it’s not surprising that the 180 was not popular, as the early AR15s with their 1-12” rifling twist were hard pressed to make those distances, as was the Ruger Mini 14. And the shorter barrel of the Sterling gun with the same twist rate was possible less efficient too.

The Sterling AR-180 is an interesting and also highly significant rifle for the British firearms industry. Though American-designed it was readily available to the British shooting public at a price far better than the Colt AR15. It also represents the high point of our modern firearms industry, which had peaked by the early/mid 1980s. But if Sterling had continued, what else might have we seen from them? I believe that they were working on a bolt-action rifle at the time of the firm’s demise. Doubtless they would have gone on to enter the 5.56mm battle rifle race that culminated in us getting the SA80. Who knows, by then they may have moved the basic AR-18 design forward considerably, so it could have been a very different story today than what it is…

On that note I shall leave you, and point out that if you ever take an SA80 apart, or see a picture of one fully disassembled, then look very closely at the bolt and gas system, as it’s almost a direct copy of the old AR-18 system. What goes around comes around…